Tyson Fury: "If I Don't Knock Wilder Out, It Doesn't Count!"

Tyson Fury wants a definitive victory over Deontay Wilder in the rematch on Feb. 22, going as far as guaranteeing a second-round knockout against the Alabaman boxer in their forthcoming fight. (photo by Ryan Hafey)

“He said he was going to knock me out last time, and he didn’t,” said Fury. “Why do you think I employed [new trainer] SugarHill Steward? Is it to improve my slick boxing moves and style? I don’t think so. It’s to look for that big right hand — Thomas Hearns style. Pow! That’s what we’re looking for. Knock out, or go home. If I don’t knock Wilder out, it doesn't count.” 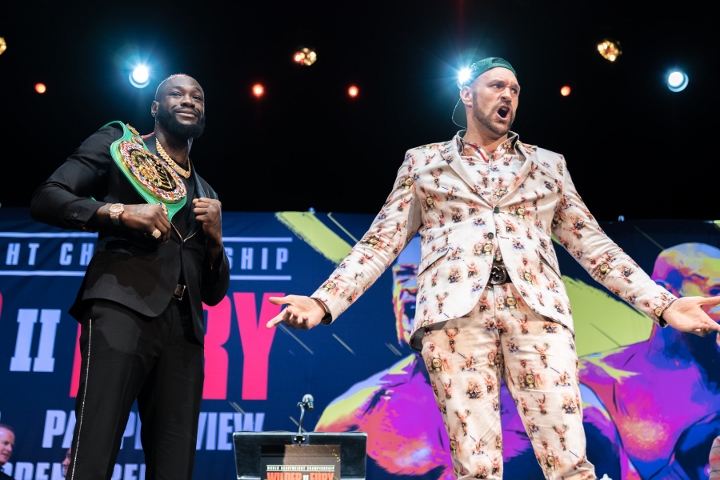 Fury said he wants to make sure he’s pulling out all the stops during camp in order to come away victorious on fight night. He also admitted that he will not risk getting hit in the head during sparring in order to avoid a potential cut over the right eye that required 47 stitches in his last fight against Otto Wallin, and thus, a potential fight postponement with Fury.

“I’m really eliminating all of the outside distractions this time. I eat, sleep, train and repeat. I’m eating five-to-six meals a day. I’m drinking many liters of water a day. I don’t really do anything else. I don’t go out. I don’t see people. I don’t speak to anyone on the phone. I don’t do emails. I don’t search Google,” said Fury.

“This is the first training camp in 10 years that I haven’t had a Diet Coke. This is the first training camp where I’m literally going to bed early every night at 9:30 p.m. I wake up every morning at 7 a.m. fresh as a daisy. I literally live in training camp like a Spartan and Trojan warrior, and that’s it. I don’t really know if any of that even matters on the night. It didn’t matter before. But if it’s willing to give me an edge on the night of the fight, than I’m willing to try it. Why not? What will happen on Feb. 22 is all in the hands of the gods.

[QUOTE=Zelda;20354665]Ruddock finished the fight on his feets trading blows with Tyson. Easier said than done, even for the real Tyson and this fake one is talking. That is exactly what Fury will do. Box, run, and grab. Do not provide…

[QUOTE=Mindgames;20329672]Stealing Mike Tysons reference to the Ruddock fight "If I don't kill him, it dont count". [/QUOTE] Ruddock finished the fight on his feets trading blows with Tyson. Easier said than done, even for the real Tyson and this fake…

[QUOTE=Bronx23;20329740]Man can you imagine if he actually pulled it off. I feel like it would be similar to Ward knocking Kovalev out. Ward said he was going for the K.O. and most of us laughed and thought it was just…

U said it yourself !