Tyson Fury: I Have To Raise My Game To Win a World Title

Tyson Fury is unruffled by Deontay Wilder's plans to be ringside to watch his fight against Francesco Pianeta on Saturday at Windsor Park.

The WBC heavyweight champion has confirmed he will travel to Belfast to attend in the expectation that he will next defend his title against Fury in Las Vegas on November 10 or 17.

Fury, in only the second fight of his comeback, will face the scrutiny of Wilder, who could prove his biggest test. 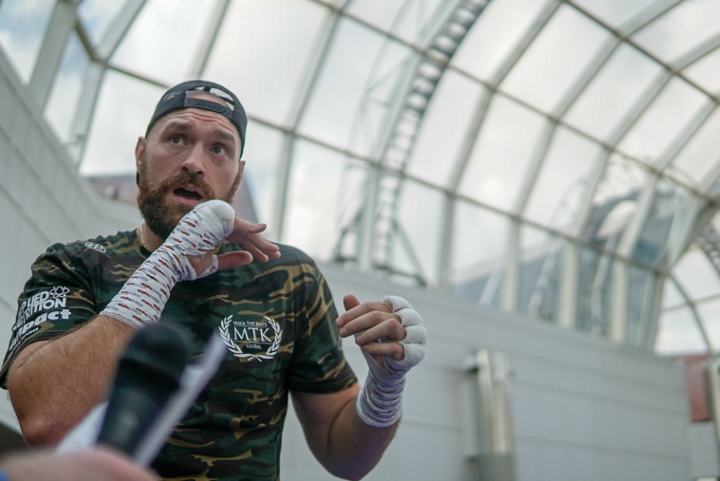 But asked about the American's presence on Saturday after a public workout in Belfast on Wednesday, Fury responded: "It's not really concerning me.

"What's concerning me is my legs looking very long and slender? I've been working on them for a very long time and they're still not very big, but they're quite long, so they'll be alright on the night. I'm looking forward to a great night."

Fury's fight with Germany's Pianeta, 33, features on the undercard of Carl Frampton's against Luke Jackson.

He was also introduced as the "lineal heavyweight champion of the world", and the 30-year-old added of his return to Belfast: "I've boxed here quite a few times before, this is my fifth as a professional. It's a great night at Windsor Park. It's going to be a historic night; you've got to think, 'Where were you on that night at Windsor Park?"'

“The old Tyson Fury is gone, never to be seen again in history. The new Tyson Fury is here now. All I can promise is to put on a good fight.

“I do want to win a world title again so I have to raise my game after three years out of the game nearly and ballooning up to 28stones.

“To lose that weight has been mentally and physically draining and to do it there has to be a want in the brain and I have that. That’s why I’m a sick boxer and I win fights.”

[QUOTE=PotentialToast;19024688]All UK boxers are subject to the intensive drug testing in the UK that all other sports are. It is as stringent as it gets and it is pretty well funded. Basis for suggesting otherwise.[/QUOTE] Personal knowledge of a number…

[QUOTE=scarybodyshot;19024357]That's the thing about mental illness, it never truly leaves an individual.. you can suppress it with therapy or medication but it will always be there. I also believe his massive weight loss as suspicious, you'd expect a little bit…

[QUOTE=Noelanthony;19024406]Hate them. F#ucked my knees up for life because of that exercise. Fu#ck that exercise just gives you a female’s booty anyway. Lol[/QUOTE] Yeah I ****ed mine up for a bit too when I started , you have to keep…

[QUOTE=allen23;19024677]completely agreed, it may not be pleasing on the eye but its super effective. As for MayMac i feel that was the only time mayweather walked through someones punches, granted he has a granite chin as mosley found out but…