Heavyweight contender Tyson Fury is already making the rounds in the United States, as he prepares for his Las Vegas debut on June 15th.

Fury will collide with undefeated Tom Schwarz on June 15th at the MGM Grand.

The contest will be Fury's first bout of his co-promotional pact with Top Rank and ESPN. 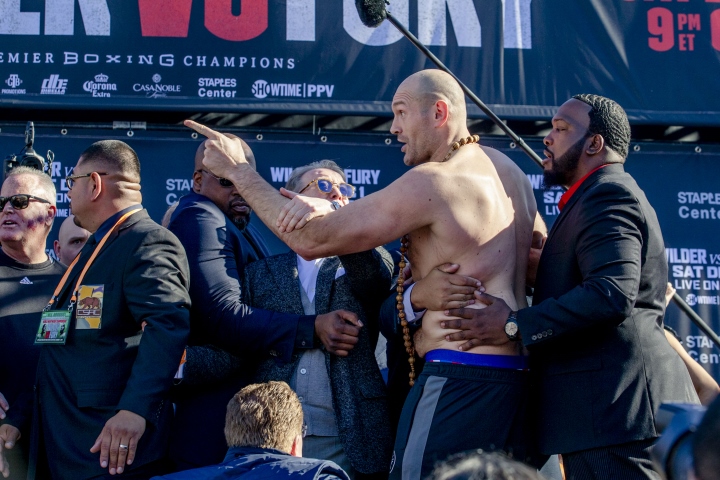 In his last fight, back in December 2018, Fury fought to a controversial twelve round split draw with WBC heavyweight world champion Deontay Wilder.

Fury is no stranger to making contradicting statements.

On one end, he admits that a deal was nearly complete for a rematch with Wilder, but he instead signed a multi-fight deal with Top Rank and ESPN.

But in the same interview he states that Wilder was the one who went in another direction with a multi-fight deal.

“We were very close to a rematch. We had contracts, they had contracts, we were trying to agree terms and then all of a sudden, I had a massive deal from ESPN. They made me an offer I couldn’t refuse. That would have been in May,” Fury said to Ariel Helwani’s MMA Show..

“Deontay Wilder apparently signed a three-fight deal before I signed an ESPN deal. He signed a deal to fight Dominic Breazeale, Luis Ortiz and Adam Kownacki. So this is all done before we even put pen to paper.

“If the fighters are willing to fight then why should a network get in the way? Fighters use that as an excuse - AKA Anthony Joshua. He uses that a lot as an excuse. But I believe if the fighters really want to fight each other [the fight can be made] as I proved.

“I was on BT Sport, I came over to the United States and boxed on Showtime. These fights can happen, why can’t they do a dual broadcast? It’s been done before, it will happen again. Deontay Wilder cannot run from Tyson Fury forever. The fight has to happen.”

Amnesia is indeed a bad thing. Not sure Fury has recovered from KO even though he outboxed Wilder's ear

Fury and wilder need to fight sooner rather th a n.later. Each accusing each other of running.? Josh supposed to be the best but it's wilder and fury getting it on?

So Tyson just had an article yesterday saying he took the ESPN deal to make the fight bigger. Now today Wilder is running? Even if he later learned Wilder has Ortiz and Kownacki for next fights so what? Truth is...…

[QUOTE=Toffee;19761575]Whenever I read on the internet that someone is "hearing" something, I just assume it must be bollix. Because most people aren't speaking to informed sources, they're just following the usual media outlets like the rest of us Am I…