The difference was one second.

Tyson Fury, inexplicably behind on one card, well ahead on another and narrowly ahead on the last, had a decision win within reach. He’d survived a ninth round knockout where he didn’t seem all that hurt.

The knockdown in the twelfth and final round was a different story. Deontay Wilder landed the bomb he’d been looking for all night. Fury, flat on his back, looked done for the night. Jack Reiss began a seemingly elementary count.

Then Fury got up.

He beat the count by one single second.

One second was the difference between a loudly debated decision more people than not seemed to believe should still have gone to Fury and one of the most dramatic stoppages of all time.

It wasn’t a great fight from bell to bell the first time Wilder and Fury squared off. Punches landed were at a premium for both men. It didn’t matter. The drama in Deontay Wilder fights isn’t about how many punches land.

It’s about if the punch that counts finds the mark.

It landed the first time, if not for the win than at least to stave off defeat. Against all but Bermane Stiverne in their first fight, Wilder has landed what was needed in every fight of his career. Can Fury be the man to finally buck the trend and finish what he started last time around?

Or, having seen the tricks and trade of Fury once already, is Wilder simply lying in wait to erase the one second he couldn’t last time? 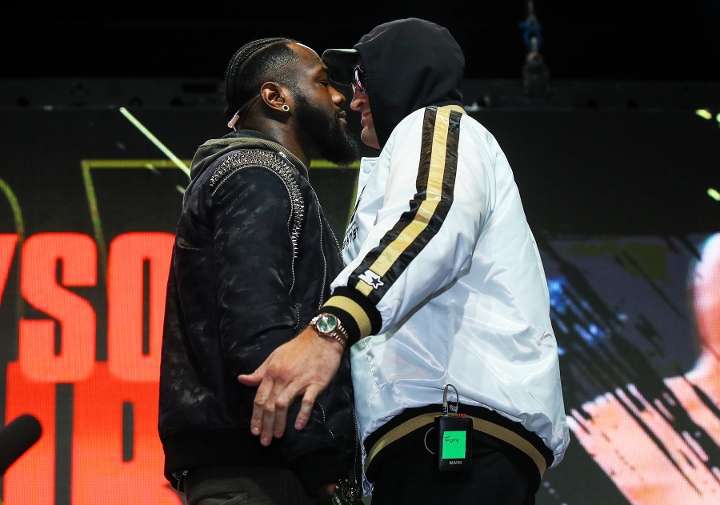 The Case for Wilder: One can make a case Wilder hasn’t clearly won a round where he didn’t score a knockdown in his last three fights. Two of those fights, a clash with Dominic Breazeale and a rematch with Luis Ortiz, ended with one viperous shot. The first clash with Fury...again, one second. Wilder will never be a technical marvel but it’s an error not to see the skill he employs in consistently finding a home for his right hand (and sometimes an underrated left hook). Wilder in the last couple years has shown growth, maturity, and patience. He rarely wastes energy and carries a jarring confidence in his power.

Wilder is the rare fighter who can ice his man in any round and has proven resilient under fire since the first clash with Ortiz. Against Fury the first time, his follow up attack in the final round was too anxious and Fury was ultimately able to stun him and stop his momentum. If Wilder can get Fury in big trouble again, regardless of when it happens, and be just a little more patient, a stoppage is highly possible. Wilder didn’t look as bulked up as the scale suggested but if there is a wonder, has Wilder at a career high weight sacrificed any speed in order to bring more mass behind his shots? Part of the danger of Wilder isn’t just the power. It’s the suddenness he delivers it with and every split second matters.

The Case for Fury: Fury made fools of everyone who thought he’d be rusty against Wilder the first time despite two comeback fights and over a year back in the gym. Fury is always a little awkward and he’ll never be an adonis but the weight on the scale Friday has to raise eyebrows. Is he really that heavy? His face was lean and arms tone and as if not more muscular than for the first fight. He weighed in wearing pants and shoes so it’s hard to say but he’s definitely not lighter. Fury controlled most of the action the first time not with an abundance of punches landed but by using his length, jab, feints, and head movement to dictate the pace of the fight. He’s as good a feinter as there is in boxing and confident enough to showboat in between. Fury also had the conditioning to absorb and shake off the power of Wilder when he got up.

It’s easy to forget that in both rounds where he was dropped, Fury came back to stun and stem Wilder. Fury has moved his hands more since the Wilder fight, throwing roughly twice as many punches against Otto Wallin as he did against Wilder...but consider the incoming. In the first fight, it was Wilder who adjusted late. Regardless of how many rounds Fury won early, it was Wilder who scored two knockdowns down the stretch. The argument can be made Wilder solved Fury to some degree. Fury has to add new wrinkles this time. Could his extra size indicate he plans to clinch and body Wilder more this time to wear the lighter man down? If he tries, does he out himself in greater danger every time Fury steps back? Fury is the more rounded, skilled boxer in the ring on Saturday night. If he can eliminate the momentary mistakes of the first bout, and show the same form he did in 2018, he is capable of winning this one wide on points.

Wilder’s second knockout of Ortiz was the perfect capsule of how much of a mental grind it must be to face him in the ring. It’s like a Jason movie in the 1980s. The kids always got away, they thought, and then there was a hatchet through the skull. The fun part about this rivalry, aside from both men’s gift for promotion, is it pits a pair of heavyweights who have always come up biggest when the lights were brightest. They are gamers. The referee matters big time here. Reiss gave Fury the count many referees might not have given how devastating a shot was landed. Will referee Kenny Bayless show the same focus and patience to see the fight through? Fury might not be able to count on that twice.

This scribe picked Fury to win the first time and it’s hard not to do it again the second time. Wilder might only need one shot but eventually every puncher runs into the fight where one isn’t enough. Fury is the better craftsman and the first time around, using consensus scoring, Fury could be argued to have won at least eight rounds (right around where a lot of the press saw it). Fury never hurt Wilder in the fight as bad as Wilder hurt him but there were several moments where Wilder was visibly stunned. Fury may have to be more aggressive in similar moments here to make rounds more clear. That way means danger via possible exchanges, something Fury wants no part of so expect it to be sparing. No matter a training switch, Fury is still Fury and his best game is to box, move, and nullify.

Fury needs to be in his very best shape to pull it off for all twelve rounds. This scribe isn’t convinced he is. Perhaps because of the time he needed to heal from the cut in the Wallin fight, perhaps because he took his eye of the ball, Fury is almost twenty pounds heavier than he was for the first Wilder fight and almost thirty pounds heavier than he was for his career making win over Klitschko. It won’t make him faster and the reflexes to get away from the right hand matter more than overall skill. Wilder won’t lose as much speed with the extra weight and eventually he’s going to land. This time, it will be enough to end the night. The pick is Wilder.

Decent piece Roldy but disagree with your pick as mentioned on Twitter. Will be a fun night of boxing though! Have a great night!

And wilder gets a guaranteed $30m plus percentages of the Ppv/back end. Sounds like he was absolutely right to bet on himself and not give control to Eddie Hearn and deadzone