James wasted no time in taking control of the fought, as just five punches into the first round, he dropped Knifechief with a three-punch combination.  To Knifechief's credit, he got off the canvas, and continued to fight.

However, the next four rounds would be more of the same, as James lived up to his promise of showing flash, speed and power.  Finally, 28 seconds into the fifth round, referee Tony Chiarantano had seen enough and stopped the action.

James had this to say about his first main event victory, "It was a great fight.  The opponent [Knifechief] was tough as nails.  I'm happy I was able to get rounds in and I hope I made the crowd proud with my 5th KO in the row. " 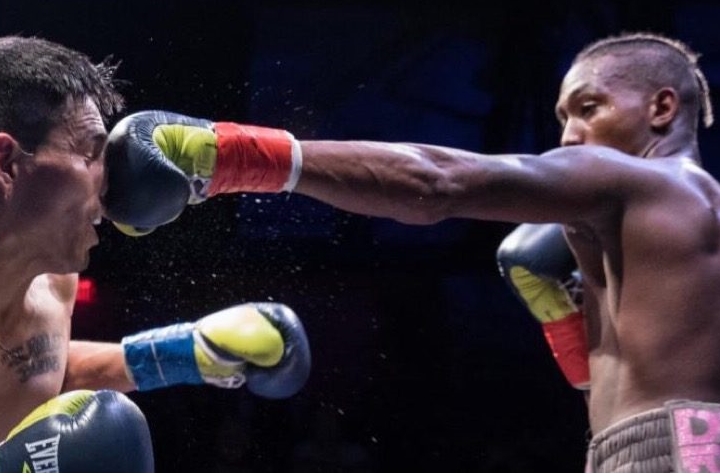 Almonte had this to say about his US debut, "I knew it was going to be a tough.  Mexicans are warriors, plus I had never fought a southpaw before.  I'm just glad that I was able to showcase my skill in the USA.  People are going to remember the name 'Bombita' for a long time"

If you thought that you were in a soccer stadium, during the ALEX "EL TORO" VARGAS (Bellport, NY now 4-0 1KO) vs DEO KIZITO (Silver Springs, MD by way of Uganda, now 3-4 2KO's), we understand why.  Chants, songs and cheers broke out from the masses at The Paramount, rooting on Long Island favorite, and New York Golden Glove champion, Vargas.

At the end of the four rounds, Vargas earned the unanimous decision victory.  (40-36 (x3))

In the opening bout of the evening, New York Police Department (32nd Precinct) officer, EMMAUNEL ETIENNE (Uniondale, NY now 1-0 1KO) took on CHARLES JOHNSON (Upper Marlboro, MD now 1-4 1KO) in his pro-debut over a four-round cruiserweight bout.  In the third-round, Etienne closed in on Johnson, bearing down with flush body to head combinations, causing the referee to stop the action, 35 seconds into the third round, earning the TKO victory in his pro-debut.