Tureano Johnson: When I Saw His Last Fight - I Knew I Could Beat Munguia!

Tureano Johnson is facing a younger and stronger foe in Jaime Munguia Friday night, but do not tell him he has zero chance of winning.

Instead, Johnson will state he has the edge in terms of other noteworthy intangibles and plans to defeat the unbeaten former world junior middleweight titleholder and contend for a world title belt in 2021.

Johnson hopes to pull off an upset victory when they square off at the Fantasy Springs Resort Casino in Indio, California. The 12-round bout will stream live on DAZN (8 p.m. ET/ 5 p.m. PT). 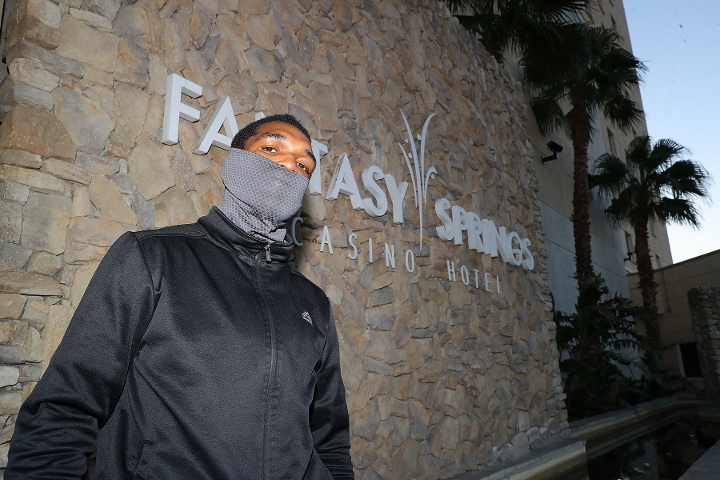 Johnson will represent Munguia’s first significant test as a middleweight. In his last bout on January 11, his first at 160 pounds, Munguia battered fringe junior middleweight contender Gary O’Sullivan before knocking him and winning by knockout in round 11.

Both Munguia and Johnson fight underneath the Golden Boy Promotions banner.

Despite being an underdog Friday night, Johnson believes he can hand the Tijuana, Mexico resident his first loss as a pro.

“When I saw the fight (against O’Sullivan), I said to myself that I can beat Munguia and look good doing it,” Johnson told Boxingscene in an interview over the phone last week. “I thought to myself that if he was going to fight again as a middleweight, I should be the one to get the fight. I believe that Munguia is tailor-made for me. I believe I have the style, power, and speed to beat him.”

Prior to the draw against Castaneda, Johnson lost by knockout in round 12 to three-time world title challenger Sergey Derevyanchenko. Johnson had won his previous six bouts following his knockout loss in the final round to Curtis Stevens in April 2014. Many at ringside had Johnson up on their scorecards prior to round 10.

Johnson has worked with trainer Andre Rozier over the last several months and has gained more confidence in improving his skill-set to compliment his power.

“If you watch my last fight (against Quigley), I’m much better than where I was five-six years ago,” said Johnson, who made his pro debut in March 2010. I’m much faster, better, and clever as a fighter. Andre has really worked on my ability and speed, along with working with me as a conditioning coach. He has been awesome with me.”

Johnson had a late start to his pro career, making his debut at the age of 26. Johnson represented the Bahamas at the 2008 Olympic Games in Beijing.

He believes his amateur pedigree has given him a solid foundation to the pro game, especially with working with the likes of Rozier.

“I could’ve turned pro, but I stayed in the amateurs for the Olympics in 2008 and because I knew I would get moved along quickly in the pro ranks when I turned pro,” said Johnson. “I believe I have world championship pedigree and I’ve gotten better.”

Johnson acknowledges long periods in between fights due to management issues and injuries. He has since moved on, including involving his family more in having a say in who he fights.

A victory over Munguia would open opportunities for Johnson, including significant purses and fighting on bigger platforms. Even fighting for a world title belt is not out of the question.

Johnson believes he does not need to look fo any added more motivation, but instead holds himself to a higher standard in terms of comparing himself to other middleweights in the sport.

“Munguia is an opportunity I couldn’t pass up. I’m the primary means for my family and I want to continue providing for them. My wife and I work as a team with the best interests for my family, which we manage well.”

“Munguia is young and strong and he also has a good punch. My focus is on being the best fighter I can be. I’m expecting the best Jaime Munguia on Friday. I may sound biased, but I believe I’m a top-10, top-5 fighter in the middleweight division. Munguia is my opportunity to prove to the world what type of fighter I am. I believe I will get an opportunity for a world title when I beat Munguia.”

What weakness does mungia have as a fighter, in terms of technical flaws? I'ma take a look and see what style could beat him

So they are fighting for a vacant dummy belt?

Hopefully you do, I will be rooting for you! Did not like Mungia ducking a competitive division like the 154 weight class and now moving up to a less competitive weight class in 160! I hope Johnson knows he won’t…