Tszyu: I Think Pacquiao Will Hurt Thurman, Beat Him Convincingly

Pacquiao, who holds the WBA "regular" title, will face Thurman on July 20 at the MGM Grand in Las Vegas, Nevada.

Tszyu, the son of Hall of Famer Kostya Tszyu, expects Pacquiao to come out on top. 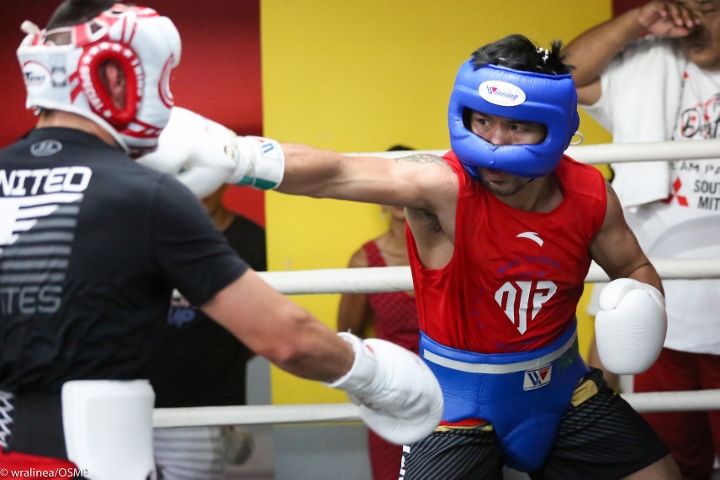 Tszyu has been sparring with Pacquiao, as the eight division champion prepares for the upcoming contest.

Pacuqiao is a fan of Australian sparring partners, as he previously used George Kambosos for the January 19 victory over Adrien Broner.

“I think Pacquiao will beat Thurman convincingly. If Pacquiao wants it as bad as how he wants it in his early days, I think you’ll see the best of Pacquiao,” Tszyu, 24, told The Manila Times.

“I think he will hurt Thurman, he comes forward real quickly. And when he got these angles, then he will catch Thurman. If he sees Thurman hurt, Pacquiao will go for the kill to get that TKO,” explained Tszyu, a super welterweight with a win-loss record of 13-0 with 10 knockouts.

Pacquiao, who is boxing's only eight division world champion, is now 40-years-old and many believe that he might be near the end.

Tszyu reveals that Pacquiao's power is still there.

“It’s snappy, it’s like a sting. Imagine like a sting that you feel it in few seconds. It’s a different power than what I have been hit before,” said Tszyu.

Head trainer Buboy Fernandez described the much younger Tszyu as a “copycat” of Thurman, who prefers to use his feet and box in recent fights.

“He sparred really good and we’re expecting he will be able to show more in the next sparring sessions. You can see it in his moves,” said Fernandez in Filipino.

Interesting comparison. Duran dropped Barkley after nearly shutting his eye with a full night of constant countering over Barkley's jab. It's hard to imagine Pacquaio dropping Thurman, who's nobody's fool. But that's why they fight the fights. Anything can happen.…

[QUOTE=SplitSecond;19809947]That marquez was slower, smaller and 40 where as thurman... thurman isnt a dumb fighter neither.[/QUOTE] marquez is bigger than pac...

Of course he won't say anything bad... [QUOTE=Chups;19811083]How old was Duran when he beat Iran Barkley? He was considered past prime and no one thought he would win. That was a great upset and got him another rematch with SRL.[/QUOTE]…

How old was Duran when he beat Iran Barkley? He was considered past prime and no one thought he would win. That was a great upset and got him another rematch with SRL.

Of course Tim2 being Pacquiao's current sparring partner has nothing to do with him supporting the boss. Nah.