Truax on Quillin: Loser of This Fight's Gonna Be in a Tough Spot

Caleb Truax shouldn’t be this hungry. Not now. Not again.

Sure, he’s got a huge fight coming up in his home state of Minnesota on Saturday against Peter Quillin, but he’s been to the mountaintop before. He has a world championship belt sitting in his house, the culmination of a life’s work, the silencer of all doubts, and at 35, most in his position can’t find that desire to get to a championship again.

They’ll show up, fight, go through the motions, but the grit that got them to the title the first time just isn’t there.

Truax isn’t the rule. He’s the exception, and if he needs any reminders, he gets them daily at Lyke’s ACR Boxing Gym in Coon Rapids. It’s the only gym he’s ever known, and it’s the kind of gym nearly lost these days. A recent PBC on FOX feature on Truax contained the boast that there’s no shower in the gym, but the roof leaks if you want to get wet.

He laughs, revealing that a storm last weekend canceled his last day of sparring.

“It was rainy here and the ring was all wet from the roof leaking, so we had to cancel it,” he said. “But it’s home. That’s where I’ve been, that’s all I know and that’s all I need. We’re raising world champions from the ground up with the most basic of amenities you can possibly think of.”

Truax describes the folks in the gym as “a family,” and that family celebrated when Truax upset James DeGale in December 2017 to win the IBF super middleweight crown. It was a victory for all of them, one many didn’t think they would ever see after Truax’ losses to Daniel Jacobs in 2015 and Anthony Dirrell in 2016.

But the Midwest standout kept working, and when he got the chance to be the B side against DeGale in London, he made the most of the opportunity. Five months later, he was an ex-champion, as he dropped a close decision to DeGale in their rematch in Las Vegas. It was a good run, most assumed, and the end of a great boxing story, because how could Truax reinvent himself again for another title run?

Easy, said the man with the gloves on.

“After the DeGale fight I was pretty emotional,” Truax admits. “But other than that, I approach things with an even keel and I just want to compete and win and do the best that I can and provide for my family. I never get too high, I never get too low, I just stay in the middle and approach every fight like it’s a world championship fight.” 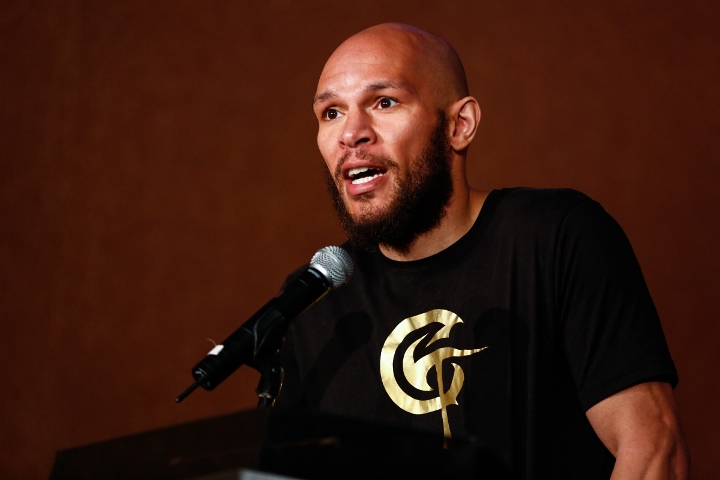 It’s a lesson learned from his manager, Ron Lyke, and one Truax took into his August 2018 comeback bout against Fabiano Soares, and the result was a third-round stoppage victory. Then the Quillin fight dropped in his lap, and with a chance to beat a fellow former world champion on national TV, there was no hesitation in taking the bout. As for his approach, well, you know the answer to that already.

“I’m approaching this fight like it’s a winner take all, loser go home type fight,” said Truax. “If I win this fight, I get another title shot, I make some money. If I don’t, I don’t know where I go from here. The loser of this fight’s gonna be in a tough spot.”

If Quillin feels the same way, there will be fireworks in Minneapolis. If not, Truax could have an easy night. So does Truax think Quillin shares his all or nothing mentality heading into this weekend?

“When we were together in Los Angeles for the PBC Face to Face, that’s the message I portrayed and that’s not the message that he portrayed. He said he was content with his legacy already and content with his resume. So I don’t know if it’s that he’s not hungry, but the way I see it, in order for me to keep on providing for my family as a professional boxer, I need to win this fight and that’s why I’m so motivated to do it.”

And if he does get another crack at the crown, he’s already got plans for after he wins a second belt.

“I’m gonna buy a bass boat, man,” Truax laughs. “I told myself if I beat DeGale the second time I was gonna buy myself a bass boat and I didn’t come out victorious, so I didn’t buy the boat. But if I win a second world title, I’m buying the most expensive bass boat I can get with some power poles and crazy electronics and everything. You might never see me in the ring again. I’ll be fishing all year round.”

The Rebirth of Kid Chocolate! Easy Work! Make it quick! Salute to Joey Spencer and Lil' B-Hop! I see y'all! Keep it movin'!

I still remember when Quillin had fans. It was a different world back then.

Even if he loses, Truax a bit like Rosado in that he has decent name recognition, is likeable, hard working, but ultimately limited enough to keep getting fights against guys on their way up who want a reasonably recognisable name…