Trout: Beating Charlo Would Be Bigger Than My Win Over Cotto

Back in 2012 at Madison Square Garden in New York City, Austin Trout (31-4, 17 KOs) secured the biggest victory of his pro career when he won a twelve round unanimous decision over Miguel Cotto.

On Saturday night, Trout will collide in the ring with WBC junior middleweight champion Jermall Charlo in a Showtime televised fight from the Staples Center in Los Angeles, California. 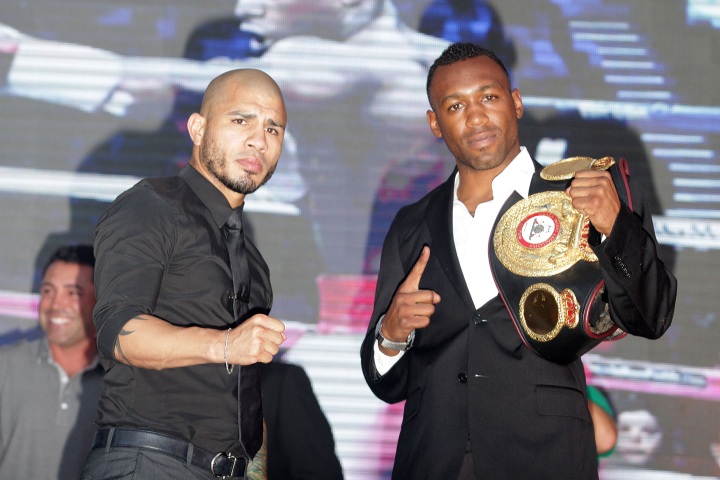 Some regard Charlo as the best fighter in the junior middleweight division.

Should Trout win, it would be a huge win for his career - and one of the biggest upsets of the last few years.

And if he loses, it could be the end of the road as a major player at that weight.

"I'm very excited to be here and have another once in a lifetime opportunity. I believe this is destiny. I'm coming into the lion's den and I'm going to come out unscathed," Trout said.

"As great as my win against Miguel Cotto was, I don't think it compares to this fight here. People complained about Cotto being old after I beat him, but with Jermell, there's no excuse you can make up. He's an undefeated world champion, so if I get the win, this is definitely bigger than Cotto. I don't think Charlo is overlooking me because I bet his brother told him not to sleep on Trout. Everyone's going to see what I've been saying on Saturday night.

"My training camp with Barry Hunter was fantastic. We got all the work in that I needed and Barry is someone who always pushes me to be better than I believe I'm capable of.  I learned from my mistakes when I fought the bigger brother. I'm going to be even better on Saturday and it's going to be a totally different result.

"For everyone sleeping on me, you better wake up. It's going to be an awakening on Saturday night."

[QUOTE=Jab jab boom;18847125]boxing on Nintendo wii doesn't count you lil b1tch. You don't even k ie me so you're making false assumptions but I got you pegged. A Wack ass Mexican who doesn't know sh1t about boxing. Only thing you…

[QUOTE=Shadoww702;18846776]Ohh I box all the time. Unlike Punk ass rascist Bi@tches like you who punch ppl when theyre not looking. You're the Jab, jab ,boom PROUD UNCLE Leon. Crawl the FUK out of here on your belly.[/QUOTE] boxing on Nintendo…

[QUOTE=Jab jab boom;18845104]what makes you think I like Andre dirrell?? He quit in fights just like Chavez jr & sr, although I'll give sr a pass cause he was old. But just like Ortiz, & Oscar, dirrell quit when the…

[QUOTE=Shadoww702;18844909]Yup! He should of flopped and played dead like Andre YOUR hero![/QUOTE] what makes you think I like Andre dirrell?? He quit in fights just like Chavez jr & sr, although I'll give sr a pass cause he was old.…

[QUOTE=Jab jab boom;18844868]blah blah. Back to my original post, he was out boxing Canelo and wasn't getting credit. Once he got dropped it was downhill. What's so hard to understand? Never said trout should've won but he should've gotten more…