Tristan Kalkreuth Crushes Blake LaCaze in One Round

SAN ANTONIO—Jaime Munguia leaves a junior middleweight title reign in the rearview mirror as the unbeaten Tijuana, Mexico native begins his middleweight campaign. His first fight at the new weight comes versus veteran gatekeeper Gary 'Spike' O'Sullivan (30-3, 21KOs) in a 12-round bout Saturday evening live on DAZN from The Alamodome in San Antonio, Texas. With a win, Munguia (34-0, 27KOs) will be groomed for a middleweight title fight later this year. 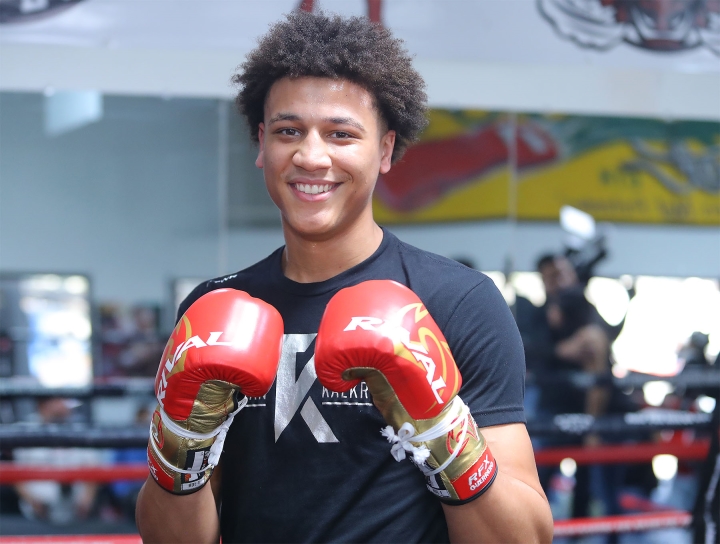 At 6'4", Tristan Kalkreuth isn't used to being the shorter man in the ring. The four inches he gave away in height to the 6'8" Blake LaCaze was the only disadvantage he had, enjoying a massive physical edge as shown in a 1st round knockout win.

Two knockdowns paved the way to a stoppage win for Duncanville's Kalkreuth (4-0, 3KOs) at 1:50 of round one.

The spectacle of two of the taller cruiserweights in the world quickly gave way to a one-way showcase for Kalbreuth, who was quick to the draw as a left hook by the 18-year old floored Louisiana's LaCaze inside the first minute of the contest.

LaCaze (4-8-2) beat the count but didn't offer anything to keep his opponent at bay. Kalkreuth—trained by renowned cornerman Ronnie Shields—remained poised, boxing smartly until able to create an opening, Lacaze dropped his left hand just low enough to catch a clean right hand on the chin. Kalkreuth connected with another straight right followed by a left hook which produced the second knockdown and an immediate stoppage.

Hector Valdez picked up his quickest win in more than two years, coming against his most seasoned foe to date.

The unbeaten Dallas-bred junior featherweight put away former title challenger Luis Alberto Rios in the third-round of their bout which made its way to the DAZN stream via tape delay. A perfectly placed left hook by Valdez put Panama's Rios (25-6-1, 17KOs) down and out for the full 10 count at 2:59 of round three.

Prior to the knockout, Valdez showed poise while offering the full arsenal as finely tuned by world class trainer and former 130-pound champ Robert Garcia. Rios has been in the ring with the likes of three-division and reigning bantamweight titlist Johnriel Casimero, coming up short in a 2013 flyweight title bid but managing to go 12 full rounds. Valdez was prepared to go deep but saw his opening and took it in a big way. Right hands upstairs had Rios pinned along the ropes, with Valdez (12-0, 8KOs) closing the show with a left hook to the body. Rios hit the deck, rolling over in pain as referee Rafael Ramos reached the count of ten.

Valdez picks up his first knockout win since August 2017, having went the distance in one fight each in 2018 and 2019.

Travell Mazion rose to the occasion in what was intended to be his toughest test to date.

The unbeaten junior middleweight prospect delivered one of the quickest wins of his rising career, scoring a 1st round knockout of Mexico's Fernando Castañeda.

Castañeda has fought as heavy as light heavyweight and even weighed six pounds heavier than Austin's Mazion at Friday's official weigh-in. His natural size advantage never had a chance to become a factor, nor the level of experience he showed in fighting veteran contender Tureano Johnson to a surprising draw in his last fight 11 months ago.

Mazion admittedly expected to go rounds, but took the opening as it presented itself. The 24-year old prospect made his presence felt early, connecting with a right hand to the chin. Castañeda quickly covered up, managing to pick off a throwaway left hook upstairs but leaving his liver exposed to a perfectly placed left hook by Mazion which put him down. The 31-year old Mexican attempted to beat the count, but quickly dropped back down to a knee in forcing referee Rafael Ramos to stop the bout.

Castañeda remained stretched out along the edge of the ring apron at the time of the stoppage but was able to make it to his feet.

George Rincon scored the first DAZN-streamed win of 2020, but his 1st round stoppage of Argentina's Diego Perez was overshadowed by a medical scare.

Three knockdowns produced the stoppage at 2:53 of round one, but everything brought to a screeching halt as Rincon (10-0, 7KOs) collapsed in his corner while reportedly suffering from seizures. The unbeaten junior welterweight southpaw made it out of the ring on his feet though with the assistance of his corner and with on-site indication that he will immediately head to the hospital.

In between the bells, it was a solid performance from the Carrollton, Texas native who turns 28 later this month. Rincon—who scored four knockout wins in as many fights in 2019—picked up right where he left off from the preceding year, aggressively approaching Perez who has been stopped in each of his past two starts.

Rincon struck early, clipping Perez (13-10-1, 11KOs) with a right hook upstairs to produce the bout's first knockdown. Perez managed to beat the count, but spent the rest of the brief affair on the defensive and under siege. Rincon remained poised, catching Perez with a left hand to send him to the canvas for a second time. A right hook to the body paved the way for the bout's third and final knockdown, prompting referee Wilfredo Esperon to wave off the contest.

Rincon barely made it to his corner before passing out, stretched out on the canvas as he began suffering seizures. Ringside medical staff immediately rushed to his aid. Rincon made it to his feet and able to sit on a corner ring stool while sipping water before walking out of the ring fully alert.

[QUOTE=richardt;20318572]Really impressed with Mazion's positive personality, training knowledge, and skill set. He should be mentioned as one of the very top prospects.[/QUOTE] Mazion looks good been watching him for a while he's from Austin so I rock with him hopefully…

[QUOTE=ShaneMosleySr;20318819]Nothing like a 6-foot-8 guy who can’t keep the distance with the jab, swings wildly and leaves his chin up in the air.[/QUOTE] You are asking too much of a bum and i do not use the word bum lightly!!

[QUOTE=richardt;20318572]Really impressed with Mazion's positive personality, training knowledge, and skill set. He should be mentioned as one of the very top prospects.[/QUOTE] Im very high on this prospect. Golden Boy needs to put this prospect Mazion on the fast pace…

Nothing like a 6-foot-8 guy who can’t keep the distance with the jab, swings wildly and leaves his chin up in the air.

This kid has a great head on his shoulders, a pops who isn’t all in the limelight (cough cough Eubanks, cough Garcia, cough cough Guerrero) and is surrounded by people keeping him focused. He could be something if Ronny enhances…