This month has provided a very different kind of March madness for Travis Kauffman.

Less than two weeks after learning of his next fight being postponed, the veteran heavyweight was informed that he has tested positive for coronavirus (COVID-19). The news was delivered on Thursday, four days after submitting to a test after battling what he initially believed to be flu-like symptoms.

“Please keep me and my family in prayers,” Kauffman (32-3, 23KOs) announced through social media. “Tested positive for COVID-19. This too shall pass.”

The 34-year old heavyweight from Reading, Pennsylvania was due to appear on the non-televised undercard of an April 11 Premier Boxing Champions (PBC) on Fox show from Minneapolis, only for the card to have been canceled last Monday in the wake of the ongoing COVID-19 pandemic. The news was perhaps a blessing in disguise, as Kauffman first felt ill roughly three days later, his conditioning worsening by the weekend. 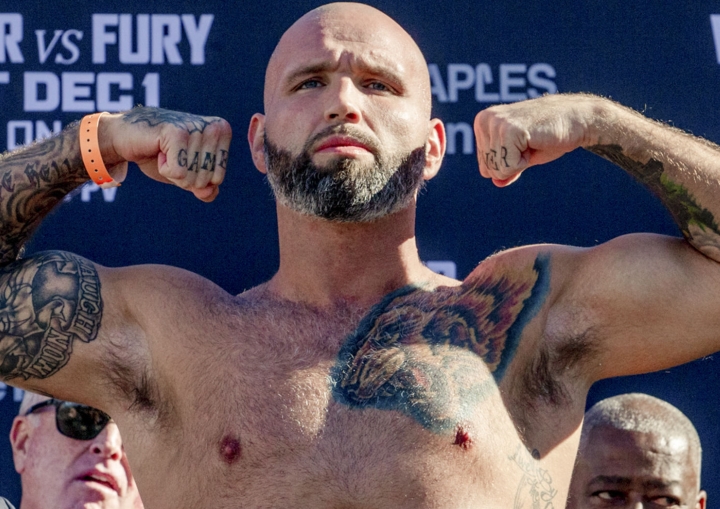 Four days passed by since being tested on Sunday, with his conditioning varying from signs of the flu to feeling relatively fine. It changed on Thursday, a day where he already didn’t feel well and was attempting to sleep in when he heard the ping of a missed phone call that would eventually reshape his own take on the ongoing health crisis.

“I just told [the doctor] that I thought I had a bad fever. They tested me to see if I had the flu,” recalls Kauffman. “The same way they test for flu, they test for coronavirus. A long tube except they leave it back there for like 15 second. I left the hospital because I thought I had the flu. The doctors told me to keep myself isolated. The test could take up to 10 days. This morning, four days later I got the results.

“I got a phone call around 11am. Today is a little worse than yesterday,” Kauffman admitted. “I got a phone call today while I was sleeping. It was the Pennsylvania Department of Health. They confirmed who I was and then asked, “Did the hospital tell you that you tested positive for COVID-19?”

Kauffman has remained quarantined since Sunday, his health visibly worse on Thursday than he claimed was the case even a day ago. Despite his present state, the boxer is less worried about himself than he is about his father and manager, Marshall Kauffman who has also been sick in recent days, as well as his youngest child.

“Whatever happens to me, happens. But if I’m not able to get through this, I’m not worried about this,” insists Kauffman. :I’m worried about my father. He’s had health problems and now he’s sick. My baby’s sick. They say this thing is like the flu, but it’s worse than the flu because it’s so f--king contagious. It’s scary not knowing.

“My dad says he’s ok and I hope he is. It’s been since Friday, and it’s been like a roller coaster. Some days I feel good then it hits me and I feel like sh-t.”

Kauffman is the first known active boxer to have tested positive for COVID-19. Current heavyweight contender Otto Wallin recently expressed concern about showing signs of carrying the virus, but has not been tested.

As previously reported by BoxingScene.com, former heavyweight title challenger Derrick Jefferson has tested positive and is in a medically induced coma in a Detroit area hospital.

Three members of the Turkey national amateur boxing team—two boxers and a trainer—contracted the virus shortly after participating in the Olympic Qualifiers earlier this month at Copper Box Arena in Hackney Wick, England.

Since then, three more amateur boxing participants—an athlete and two trainers—from Croatia have also claimed to have tested positive for COVID-19 after being exposed during the same event which was cancelled after the second day. The International Olympic Committee (IOC) has come under fire for not having shut down the tournament prior to that point.

Kauffman has not fought since a 10th round stoppage at the hands of heavyweight contender Luis Ortiz in December 2018. The setback has served as the tail end of a five fight stretch where he is just 2-2 with one No-Decision—the latter part coming in a disputed 12-round defeat to Chris Arreola in December 2015, only for the verdict to be overturned after Arreola tested positive for marijuana.

There are more than 526,000 cases of COVID-19 worldwide as this goes to publish, Kauffman’s home state of Pennsylvania has produced nearly 1,700 total cases to date–the 10th most in the United States—including 16 deaths, with all remaining in-state cases still active.

[QUOTE=NORMNEALON;20482459]Trav is a good man, I just texted with him and altho he is worried his kids may have contracted the virus he is in good spirits and remains positive .[/QUOTE] That's very good news. My prayers go out to…

this phukin’ virus must be stopped!! Happy Fast Recovery Travis :(

Heavyweight Travis Kauffman (32-3) has announced that he's tested positive for coronavirus and posted this video from self-isolation. He last fought in a tenth-round KO defeat to Luis Ortiz on the Wilder vs Fury undercard in 2018.…

Trav is a good man, I just texted with him and altho he is worried his kids may have contracted the virus he is in good spirits and remains positive .

Thoughts and prayers go out to Kauffman and his family. Has to be gut-wrenching to not know if you spread the virus to loved ones (especially those in the high risk categories). Hope Travis and his loved ones get well…