Trainer: Don't Use GGG's Age as Excuse When Derevyanchenko Wins

“When” Derevyanchenko defeats Golovkin on October 5 at The Garden, Rozier hopes he doesn’t have to listen to talk about the 37-year-old Golovkin’s age or any other justifications for his fighter’s upset victory.

“I don’t want any excuses about it,” Rozier said before a press conference Thursday at Madison Square Garden. “We’re training for the best Triple-G that we can actually get in the ring with. And ‘The Technician’ is gonna be on point. He’s gonna be ready to win this fight and he’s gonna take [Golovkin] to task, because it’s his time to do it. And when he does that, the first person that says, ‘Well, Triple-G was old,’ I’m gonna have to slap him myself.” 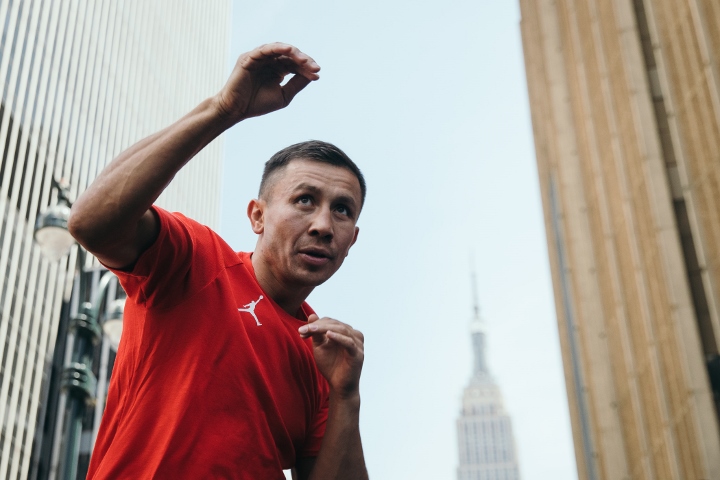 Ukraine’s Derevyanchenko is 33 and feels as though he is still in his physical prime. He noted during the press conference that Golovkin’s “time is coming to an end.”

That said, Derevyanchenko (13-1, 10 KOs) still expects to encounter a very imposing opponent when he squares off against Golovkin (39-1-1, 35 KOs) for the vacant IBF middleweight title in a 12-round main event DAZN will stream.

“It’s possible,” Derevyanchenko said of Golovkin slowing down. “Age catches up to everyone. He’s 37, but to me, he’s as dangerous as ever and if he lands a shot, it’s very dangerous. Pacquiao’s fighting at 40 and winning fights.”

Odds-makers obviously don’t consider Golovkin’s age a disadvantage entering this fight. He has been installed by most Internet sports books as at least a 4-1 favorite over Derevyanchenko, who has lost only a split decision to Jacobs last October 27 in The Theater at Madison Square Garden.

[QUOTE=j.razor;20006654][B]Cuz that dumb talk CONVENIENTLY started when Jacobs beat pvssy-g & when Nelo beat pvssy-g too. Stop ACTING like you don't know.[/B][/QUOTE] You're one of the least knowledgeable biggest a holes on these threads. You really DON'T know boxing. You're…

Double edged sword. Cause when he loses he loses to an old man....lmaoooo

[QUOTE=el***;20006409]Mosley never even fought at middleweight you tard[/QUOTE] I let a light middle slip in. Does calling someone names make you moist?

[QUOTE=Weebler I;20006748]More concerned with what I saw. By common consent, Golovkin is still the real champion in the division. [/QUOTE] What you WANTED to see...He lost to Jacobs & Nelo twice.

[QUOTE=Bronx23;20005945]100% agree with that. People don't understand the difference. I've always considered a fighters "prime" to be the years of his career where all of his tools were the sharpest (reflexes, skill, stamina, athleticism durability etc). Floyd probably had one…