Trainer: Burnett Ready To Face Any Challenge in WBSS Tourney

THREE reigning world bantamweight champions have agreed to put their titles on the line in the next season of the World Boxing Super Series.

A statement was read out on behalf of the Irishman and his trainer, Adam Booth, while Tete and Rodriguez entertained the small media gathering. 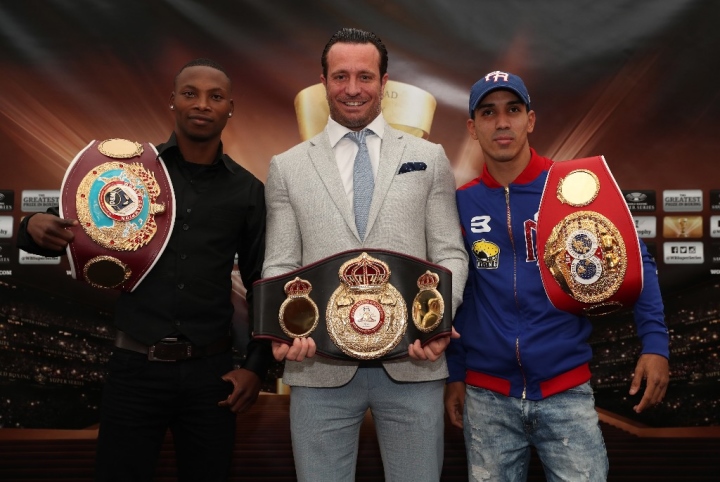 “I’m very humbled and honoured because we will be meeting the best fighters in the bantamweight division,” said South African Tete. “That’s what I’ve been looking for.”

Rodriguez, who won his world belt last weekend against Paul Butler, said: “It’s great to be fighting against two other world champions and God willing I’m going to win.”

Burnett reiterated previous desires of wanting to face the best, with Booth adding, in the statement, “Ryan is ready and willing to face any and every challenge and challenger.”

The winner of the May 25 WBA title fight between Naoya Inoue and Jamie McDonnell could be added into the mix.

Promoter Kalle Sauerland hosted the press conference at London’s Savoy Hotel and said that following the success of the super-middleweight and cruiserweight tournaments, this year’s WBSS season will comprise three weight classes (one might be junior-welterweight), while the eight-man elimination format will remain the same.

Sauerland added that more announcements on the tournaments and participants will be released in the coming weeks and plans for the draws to take place in July with the first round of fights going ahead in September.

[QUOTE=rudy;18755794]I bet you Ryan Burnett does not fight Tete[/QUOTE] If they both get through the tournament then they will

[QUOTE=DuckAdonis;18755764]You dont enter a tournament like this if you're a ducker[/QUOTE] I bet you Ryan Burnett does not fight Tete

[QUOTE=joe strong;18755720]I wish there would be a heavyweight version if the tourney. That will never happen though...[/QUOTE] Argeed: An elimination tournament would be fantastic. Miller, Whyte, Joyce, Povetkin, Parker, Kabayel, Zhang, Ortez & Bellew could all supply A1 entertainment in…

You dont enter a tournament like this if you're a ducker

I wish there would be a heavyweight version if the tourney. That will never happen though...