Handicappers have made Dominic Breazeale as much as a 50-1 favorite over Carlos Negron.

Herman Caicedo thinks they’ve gotten it just as wrong as Breazeale’s handlers. Caicedo, Negron’s trainer, figures Breazeale and his team accepted a fight against Negron because they don’t consider the Puerto Rican heavyweight to be all that much of a threat in their 10-rounder Saturday night in Brooklyn.

Caicedo knows otherwise after watching Negron work with Luis Ortiz throughout this year. The veteran trainer didn’t predict an upset, yet he urged those expecting Breazeale to walk through Negron to guess again.

“It’s heavyweight boxing, so anything can still happen, obviously,” Caicedo told BoxingScene.com. “He can come out in the first round and get clipped, and the fight’s over. And then Breazeale looks like a superstar. And it can go the other way around as well. It’s hard to predict anything in boxing, especially with guys that are 6-foot-6 and 260 pounds and above.

“But I can guarantee you that we’re not coming to lay down and what they thought we would be coming to do, which was just make Breazeale look good. I think they screwed up in that regard. I don’t know that they necessarily knew that he was with Luis, was in our camp, then signed with the management team and training with us. I don’t think that they knew that. Otherwise, they might’ve reconsidered the opponent. Maybe not, but they might have done that.” 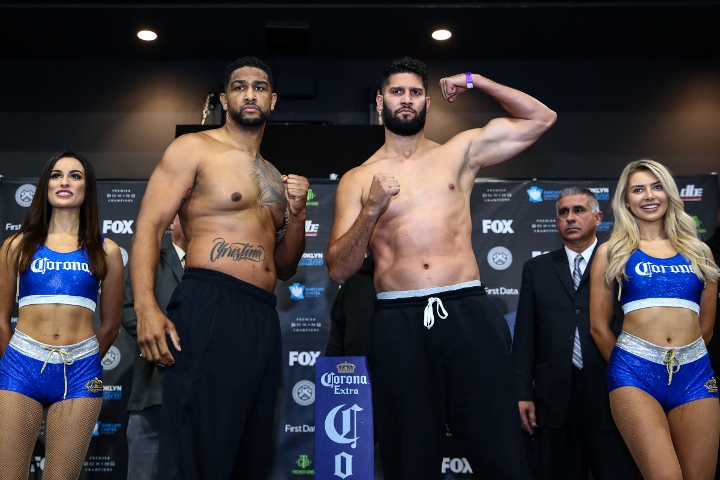 Jay Jimenez, who also manages Ortiz, signed Negron once he and Caicedo determined Negron has what it takes to become a legitimate threat in the heavyweight division. The 6-feet-6, 230-pound Negron gave Ortiz (30-1, 26 KOs, 2 NC) everything the heavy-handed Cuban southpaw could handle during training camp earlier this year for his 10th-round knockout defeat to WBC champ Deontay Wilder (40-0-1, 39 KOs) on March 3 at Barclays Center.

“He was very intelligent in the ring, especially being as tall as he is,” said Caicedo, also Ortiz’s trainer. “A lot of tall guys are very clumsy, and he wasn’t. He’s very athletic. He’s able to do things tall guys should not be doing, and he utilizes his height and his reach very well. At the same time, when he needed to get nasty, and sit and bang, he was able to do that, also. So, he’s a very intelligent fighter. He has a good amateur background, and it showed. It was very prevalent with the way he was working with Luis.”

Negron, 30, hasn’t fought since stopping Derric Rossy in the fourth round of their June 2017 bout in Louisville.

The extreme damage done to Puerto Rico by Hurricane Maria caused some of Negron’s long layoff, but Caicedo isn’t concerned about rust versus Breazeale because Negron (20-1, 16 KOs) has been in his gym for the better part of the past 11 months. The 33-year-old Breazeale (19-1, 17 KOs), of Eastvale, California, hasn’t fought in the 13½ months since he stopped Eric Molina following eight rounds in November 2017 at Barclays Center.

“I’m not really concerned, quite frankly, because heavyweights don’t really fight that often nowadays,” Caicedo said. “The really active ones can fight three times a year. But that’s not the norm nowadays. It seems like they fight once or twice. But [Negron has] been healthy, he’s been doing the necessary training. It’s not like he’s been sitting on the shelf or on the couch, not doing anything. I’m not really concerned, because Breazeale hasn’t been active, to be honest with you. So, I feel it’s all even in that regard.”

Placed $25 bet on negron to won $300. Worth the risk. Breazeale never has an easy fight and always gets rocked