Tony Yoka survived his toughest test to date, on a night when he wasn’t necessarily at his best.

The 2016 Olympic Gold medalist and aspiring heavyweight prospect turned away a stiff challenge from an aggressive Christian Hammer, earning a 10-round unanimous decision Friday evening at H Arena in Nantes, France.

Scores were 100-89 across the board for Yoka, in a bout which didn’t feature any knockdowns but plenty of rough moments for both boxers.

Yoka fought the opening round with the sense of a boxer who was prepared for the long haul. The 28-year old Paris native needed just 121 seconds to land his previous win, a 1st round knockout of countryman Johann Duhaupas this past September in Nanterre, France.

Friday’s affair wasn’t necessarily any more competitive, though Hammer provided a more durable foe. The visiting heavyweight from Hamburg, Germany was warned in the opening round for hitting on the break, a tactic which Yoka later offset by boxing on the outside and punching from long range. 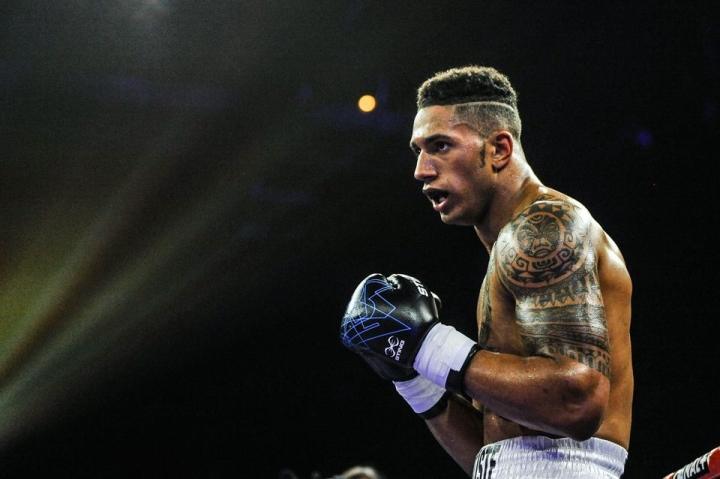 Yoka closed the gap in round two, a frame which saw Hammer cut over the right eye early due to an inadvertent clash of heads. As Hammer contended with the sight of his own blood, Yoka added to the equation by working his jab and also connecting with whipping right hands.

Hammer managed to make things extremely uncomfortable for Yoka in the ensuing rounds, targeting the body on the occasions when he wasn’t simply rushing in with reckless abandon. Yoka did his best to remain composed, still landing the cleaner blows but clearly in for a fight after having stopped each of his last three opponents in three rounds or less.

Yoka employed more movement in the middle rounds, never to the point of running but also looking to keep Hammer at the end of his longer reach. Hammer closed the gap, though to a fault as he was deducted a point for roughhousing tactics in round six.

The infraction was a moot point as it related to the scorecards, though indicative of a rough night at the office for Yoka. The unbeaten 6’7” heavyweight offered singular punches for much of the night, abandoning his jab for several pockets during the fight while Hammer refused to back down.

Time was called in round nine to repair loose tape on the glove of Yoka, giving both boxers a needed rest as two-way fatigue appeared evident.

Yoka boxed fluidly in the 10th and final round, handling himself on the inside and scoring with uppercuts. Hammer stood his ground and—despite not making a dent on the scorecards—provided a valuable challenge to the young heavyweight, who was forced to go the distance for just the second time in his career.

The win was the second for Yoka since the pandemic as he advances to 9-0 (7KOs). As was the case on Friday, Yoka shared the bill with his wife and fellow 2016 Olympic Gold medalist Estelle Yoka-Mossely, who also won a decision in her undercard appearance.

A third straight such occasion could come next month, depending on whatever discussion takes place with his team. Yoka is due to face Croatia’s Petar Milas for the EBU heavyweight title, with the fight under the control of Ringstar Promotions-France after having won a purse bid earlier this month. A prior announcement had the event budgeted for December, though Yoka’s physical condition following Friday’s affair could dictate whether or not those plans remain intact.

Yoka entered riding a six-fight win streak, having previously gone the distance only in his second pro start.

The bout served atop a four-fight telecast, airing live on ESPN+ in the United States and locally on Canal+.

[QUOTE=JakeTheBoxer;20913211]I believe Yoka fights Takam next.[/QUOTE] That's a good matchup. Both Frenchman and Takam should be a decent matchup at this stage. He will test Yoka in a different way than Hammer but will probably fade and get stopped in…

This was a valuable fight for Yoka. He needed someone in there who wouldn't fall down and who would frustrate him with rough house tactics and throw some leather back. He definitely appeared frustrated as the fight progressed. While it…

I believe Yoka fights Takam next.

[QUOTE=LoadedWraps;20912986][COLOR="Navy"] I think Ajagba might stop him.[/COLOR][/QUOTE] Yoka would outbox Ajagba and win pretty much every round. Wouldn't be surprised if Yoka stops him.

[QUOTE=JakeTheBoxer;20911951]Yoka -Ajagba should happen soon, they are not even young anymore.[/QUOTE] [COLOR="Navy"] I think Ajagba might stop him.[/COLOR]