“I gave my word, and I stand by it, and I still stand by it. He gave me a shot at the title,” said Harrison of Charlo, who confirmed during their post-fight press conference that he planned to enforce an immediate rematch clause mandating a return bout within four months. 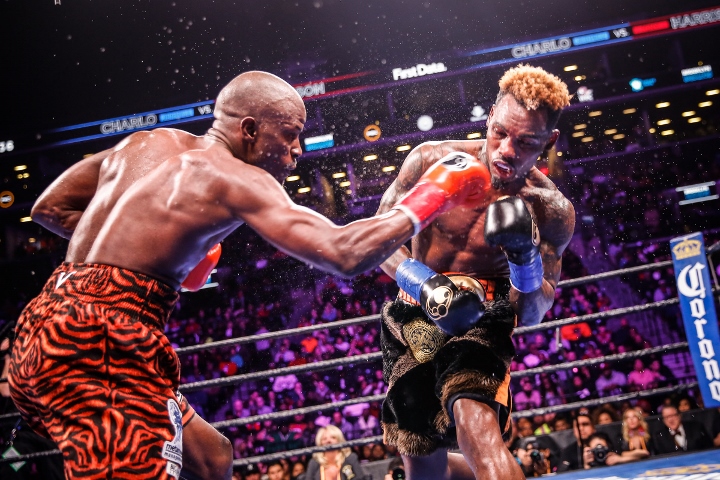 Harrison’s comments were made during a recent episode of “Inside PBC Boxing” on FOX while being interviewed by two-time and WBC 147-pound champion Shawn Porter and three-division title winner Abner Mares, who serve as a lead analysts on the Premier Boxing Champions’ studio show.

A seething Harrison spoke to BoxingScene.com from his native Detroit on December 23 shortly after 1 p.m. –the day after his win and just moments after having completed a full review and critique of what he considers to be his defining moment at the home of a cousin.

“This was my first time watching the fight, and I swear I controlled everything about it and dominated that boy. I was dictating with my jab, giving him angles and there was a lot of subtle movement, like small steps to the right or left. My feints kept him off balance and flinching and more or less reacting,” said Harrison.

“Every time he tried to get something started, I would counter him with good counter shots or freeze him with the jab. I told everybody before the fight this was going to be one of those easy fights, and that I knew it wasn’t going to be what everybody thought it was gonna be. I felt like I controlled everything about the fight, that I looked like the champion, and I swear, today, I definitely 100 percent feel like the champion.”

The 6-foot-1 Harrison has won four straight since losing by ninth-round TKO to current IBF/WBA counterpart Jarrett Hurd (23-0, 16 KOs) in an IBF vacant title fight in February 2017. Harrison’s previous three victories were a unanimous decision over Paul Valenzuela Jr. in October 2017, a fifth-round TKO over George Sosa in February 2018, and a 10-round split-decision victory over former champion Ishe Smith in May.

In relation to Charlo, Harrison told BoxingScene.com “I’ll leave that up to [their mutual advisor] Al [Haymon,] but like I told Jermell Charlo in the ring after the fight, I would give it [title shot] to him again.”

He was even more emphatic on “Inside PBC Boxing.”

“I wanna see it [a rematch,] too, and I want it just as bad as him. I’m gonna do it again,” said Harrison. “I’m gonna beat him, and the, you know, my next goal is unification time. I need Jarrett Hurd back. It’s simple. I need him back.”

[QUOTE=SugarRaRobinson;19433794]Take your 12/1 odds fake victory that was gifted and gift wrapped from Vegas, along with your 5 minuets of fame and go sit down somewhere Tony. Cause if u start believing u really won that fight, your gonna be…

Charlo beat him in a rematch.

[QUOTE=IBOX4LIFE;19434310]You do realize that fight did NOT take place in Detroit, rather Pontiac, Michigan. Two totally different places then and especially now...Detroit is an excellent fight city with plenty of decent venues.[/QUOTE] You do realize I wasn't even talking to…

[QUOTE=SugarRaRobinson;19434302]If Korobov had gotten his hand raised, I wouldn’t of protested at all. THAT fight was very close, Since u seem to automatically think I’m hedging for the Charlos. But one things for sure, there’s no way the Harrison fight…

[QUOTE=SugarRaRobinson;19434309]If u saw Harrison give Jermell a boxing lesson, then u should donate your eyes to Stevie Wonder, cause clearly u have no use for them.[/QUOTE] Then so should the three professional ringside judges who all saw Harrison outbox Jermell.…