Tony Harrison: I Am All Detroit, We Are In The Empowerment Zone

Tony ‘Super Bad’ Harrison was among the many athletes who made the charitable rounds in their respective hometowns during the Thanksgiving season, but the reigning junior middleweight titlist doesn’t need a holiday to give back to Detroit.

Every day is already spent carrying out that cause.

“I’m all Detroit, all the time.” Harrison (28-2, 21KOs) told BoxingScene.com of his lifelong love affair with his hometown. “Every day I train, every time I walk into the ring, my Detroit people are walking with me. There’s no extra weight on my shoulders because I’m not carrying anyone; everyone is here with me.” 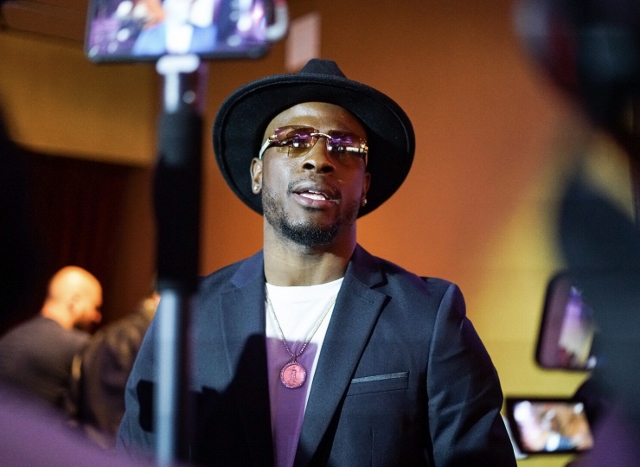 Harrison’s latest philanthropic effort came while preparing for his upcoming title fight rematch with Jermell Charlo. The two will once again collide on Dec. 21 at the Toyota Arena in Ontario, California, coming exactly 52 weeks to the day of Harrison’s upset win to hand Houston’s Charlo (32-1, 16KOs) his first loss along with snatching his 154-pound title in the process.

“The belt I won that night, it’s just a trophy I carry on my shoulder and wear around my waist,” notes Harrison. “It’s a symbol to my people back home that we can accomplish anything.

“That championship win, it was for all of Detroit. It was for all those kids who grind every day. It was to show them, if I can do it then you can too.”

It’s why Harrison opened up SuperBad Boxing Gym in the heart of his hometown, and also why he’s spent prom season hosting a prom dress drive for Detroit teens. His latest efforts this past Thanksgiving were far more than an athlete utilizing a seasonal opportunity to give back; rather an extension of the role he’s embraced in uplifting his peers.

“For me, opening the gym was more than just providing a place for kids to train,” explains Harrison. “We are in the empowerment zone. If you put your mind to something, you can accomplish anything. That’s why I say, when I fight, we’re all in there together. We walk together in spirit, five million people deep.”

[QUOTE=JakeNDaBox;20225950]Jermell certainly carries it different from others, but he's also very giving in his own right. He and Tony can absolutely despise each other, yet still do good for their respective communities.[/QUOTE] Acting like an ignorant sore loser can only…

[QUOTE=lion33lit;20225888]Yes indeed, a really good caring admirable example for everyone to emulate....Jermell on the other hand, would like us to regress by demonstrating how thugged out baby tantrums can actually exist in young adults :banghead:[/QUOTE] Jermell certainly carries it different…

[QUOTE=richardt;20225714]I read a complete article on Tony and he is a great guy with so much inner-city concern and involvement. He is a blessing to his community.[/QUOTE] Yes indeed, a really good caring admirable example for everyone to emulate....Jermell on…

I read a complete article on Tony and he is a great guy with so much inner-city concern and involvement. He is a blessing to his community.