The WBC super welterweight champion called Charlo every expletive imaginable during and after their press conference at Toyota Arena. Charlo remained calm until they went face to face at the end of a press conference that was televised live on FS1.

It was Harrison, though, that smacked Charlo’s finger away from his face. The Detroit native still left the arena confident that Charlo won’t be able to manage his emotions both before and during their 12-round rematch Saturday night at Toyota Arena. 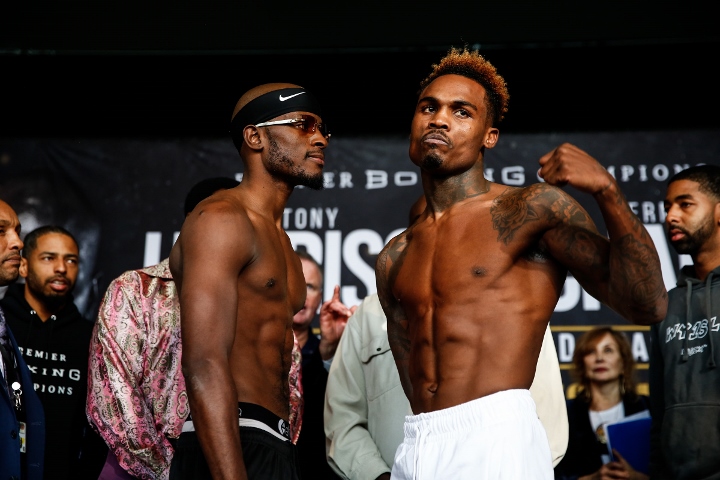 Charlo scoffed at Harrison’s contention that he has gotten the former champion off his game.

“It’s unbelievable for someone to live that mentality,” Charlo said, “to think that they can get into another man’s head, who live and die by this, who put they life on the line for this. This is not the same. This is not a comedy. You can’t get in nobody head. Get in somebody head? I don’t even understand that process, or what they even saying – get in my head.”

Charlo then promised to knock Harrison “the f--k out” in the rematch Harrison was contractually obligated to grant him.

Harrison has been stopped by Jarrett Hurd and Willie Nelson, each time in the ninth round. Houston’s Charlo appeared to buzz him on more than one occasion last December 22 at Barclays Center in Brooklyn, yet he couldn’t capitalize in any of those instances.

The 29-year-old Harrison won their fight on all three scorecards (116-112, 115-113, 115-113). Harrison hasn’t fought since upsetting Charlo, mostly because their June 23 rematch was postponed nearly six months due to Harrison’s ankle injury.

“There’s nothing I don’t already know,” Harrison said. “I’m better than him. I’m doing this for everybody else. Everybody else wanna see me do it again.”

FOX will air Harrison-Charlo II as the main event of a three-bout broadcast set to start at 8 p.m. ET/5 p.m. PT.

In the bout before Harrison and Charlo fight again, Nigerian heavyweight prospect Efe Ajagba (11-0, 9 KOs) is set to square off against Georgia’s Iago Kiladze (26-4-1, 18 KOs) in a 10-rounder. In FOX’s opener, Karlos Balderas (9-0, 8 KOs), a 2016 American Olympian from Santa Maria, California, is set to meet Mexico’s Rene Giron (13-1, 7 KOs) in an eight-round lightweight fight.

[QUOTE=Southpawology;20271140]Harrison sniffed this fraud out like a bloodhound. Charlo is a bully but he turns b*tch made when you apply pressure right back at him. [B]Hope harrison KO's this al haymon hypejob[/B].[/QUOTE] LMAO his lameass ended getting dropped 4 times…

After beating Charlo, then making him cry like a bytch in his own press conference talking about I don't even play video games LOL, then totally owning him in the trash talking for promotion of the fight Charlo had better…

Harrison sniffed this fraud out like a bloodhound. Charlo is a bully but he turns b*tch made when you apply pressure right back at him. Hope harrison KO's this al haymon hypejob.

Yeah Harrison is a throwback, love the guys attitude. Great fighter too, one of Emannuel Stewards last projects....I actually like Jermell, Jermall is very arrogant but Jermell's not really a bad guy. May the best man win