Tony Bellew: This is Definitely The End For Me

Tony Bellew was knocked out as he bid to be a great.

The Liverpool cruiserweight took on Oleksandr Usyk at Manchester Arena.

Bellew, who challenged the undefeated Ukrainian for the WBC, WBA Super, IBF, WBO and Ring Magazine world cruiserweight titles, was stopped in round eight by a thunderous left cross disguised by a sensational jab. 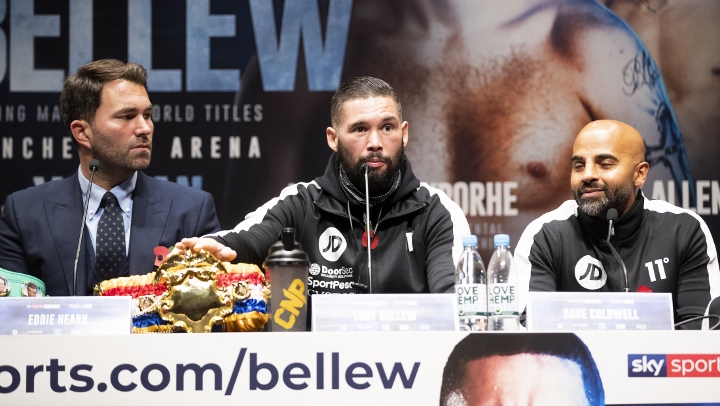 He was three rounds up on one card, up by one on another and level on the third at the time of the stoppage, exclusively live on Sky Sports Box Office in the UK and DAZN Stateside.

Usyk began to enjoy himself and get into his rhythm at the time that Bellew began to slow after a solid start.

And though the final dance of the 35-year-old didn’t end in a way everyone would have liked, we must look back at Bellew’s career as one of immense glory.

Usyk, who got the win after two minutes of the round and now moves to 16-0 with 12 early, will now want to move up to heavyweight, having retained his belts, and will target a showdown with WBA, IBF, IBO and WBO world heavyweight champion Anthony Joshua.

"I tried my best and I gave it everything I’ve got. He’s an exceptional fighter and he deserves all the plaudits he will get,” Bellew said afterwards. "I lost to a better man, the greatest man I’ve ever shared a ring with and I only wish him the best of luck.

"He’s exceptional, he’s done everything, but he was just better than me.

"You come up against some great people and you lose to some people, you’ve just got to accept it.

"I gave it everything and I only wish Oleksandr well. This is definitely the end for me."

Limited fighter who made the absolute most of his talent. Sounds like I'm throwing shade but I'm not, getting the maximum from your ability is something to be respected.

[QUOTE=SugarRaRobinson;19263196]I had Usyk losing the first 6 rounds, as he couldn’t figure Bellew out, seemed tentative and unsure of himself. Not sure y their hyping this guy up and encouraging him to move up and fight Joshua. Ward should unretire…

I'm going too miss Bellew he grew on me so much the last few years. Hopefully he got home safe to his wife & kids. Happy retirement The blue bomber! :hail: