Tommy McCarthy called out IBF cruiserweight champion Mairis Briedis after claiming the vacant European cruiserweight title as he boxed his way to a majority points decision over Bilal Laggoune on the undercard of the Oleksandr Usyk-Derek Chisora bill at the SSE Arena, Wembley. 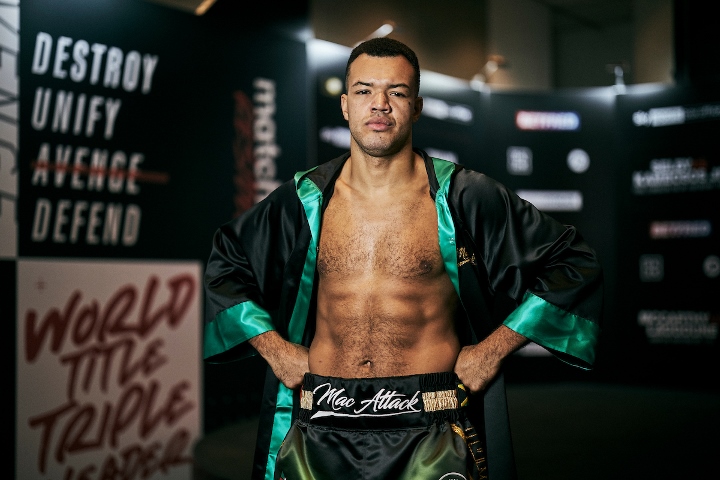 McCarthy dominated the middle rounds to build up a healthy lead and, while he tired in the last few rounds, he had done enough to claim the title. Laggoune, from Belgium, loaded up too much at times, but McCarhty’s work was generally a bit crisper and more varied.

“But now I am European champ. I am the roughest, toughest bad boy out of Belfast and I’m the first Irish black European champion in Black History Month as well.

“I don’t want to stick around in Europe, I want Mairis Briedis next. I’m the king, the toughest man in Europe now. Mairis Briedis is the best cruiserweight in the world at the moment. That’s who I want next.

“When I go back to Belfast, all the bars are locked down, but when they open up again, don’t forget about me. I want everyone buying me a pint.”

The Belgian started well, getting through with some meaty shots early on, but McCarthy took over from the third round as he started to put his punches together. McCarthy just looked the sharper and did well with body punches, slowing Laggoune up.

In the sixth round, Laggoune was caught by an uppercut and then turned away claiming something had got in his eye. Referee Victor Loughlin called the doctor, who allowed him to continue, but McCarthy opened up and began to swamp Laggoune.

The seventh round was one-sided, as McCarthy hurt Laggoune with a body shot and then forced him back into the ropes. McCarthy dominated the eighth as well, landing one cracking left hook, but the ninth was closer, Laggoune stumbling back to the ropes at one point but landing well with the right. There were also signs that McCarthy was starting to tire and Laggoune did better in the tenth as he forced McCarthy backwards again.

Laggoune really went for it in the eleventh round, pressing forward and taking the initiative away from McCarthy and forcing the Northern Irishman to stand and trade. The last round was a better one for McCarthy as Laggoune looked for a knockout shot that never looked likely to come.

Amy Timlin battled to a draw with Carly Skelly for the vacant Commonwealth super-bantamweight title after a well-contested ten rounds.

Timlin was the better boxer, but Skelly was the more aggressive, getting inside Timlin and catching her thoughout.

Skelly was the busier fighter and took the action to Timlin from the start, having plenty of success in the first three rounds. Timlin, who won a world kickboxing title before switching to boxing, found her range in the fourth round, using her jab well and walking the Liverpudlian onto her punches. But Skelly adapted well, getting low to offer little target and forcing some lively exchanges. Victor Loughlin was the referee.

Ramla Ali, who was born in Somalia but came to London as a small child, made a successful professional debut as she beat Eva Hubmeyer, of Germany, on points over six-twos at featherweight.

Ali, who is managed by Anthony Joshua, boxed in the African Olympic qualifiers in February. She towered over Hubmeyer and completely outclassed her, establishing the jab in the opening seconds and picking her off at will. Hubmeyer was brave, but it was uncomfortable watching at times, as she had no real defence against Ali’s punches. Referee Bob Williams scored it 60-54.

Kash Farooq’s super-bantamweight fight against Martin Tecuapetla was cancelled after a member of Farooq’s team tested positive for Covid-19.

'I am the roughest, toughest bad boy out of Belfast'. I think there are quite a few gangsters on both sides of the sectarian divide who would take issue with you there Tommy! Still, bring home a world title &…

This was on PPV utter garbage