Tommy Coyle: I Fight Because I Love it, But It's a Dangerous Game

Hull’s Tommy Coyle (25-4, 12 KOs) is sitting pretty following a 10-round decision win over Ryan Kielczweski in Boston last month despite the fact that the 29-year-old almost walked away from boxing after beating Sean “Masher” Dodd for the Commonwealth lightweight title in six back in April.

“Boom Boom” has a number of business interests in his hometown, is the driving force behind a charity, the Tommy Coyle Foundation, which has opened two Boxing Academies in Hull, and he is a settled family man so he did entertain the idea of retirement after his first major title win.  Coyle, though, has decided to extend his journey for a little longer in the hope that an unlikely world title shot falls into his lap.

“It was like the end of the rainbow moment, I can look back at my career and say I finally became a Commonwealth champion,” he said when talking to BoxingScene about his emotional win over Dodd.

“I’ve won International titles, but I won a belt that is honourable, a belt that no one ever disgraces and people respect.  I am proud of myself, my wife and kids can also be proud of me.  I can go for broke now.  I can just go out there and try to do as much as I possibly can while I’m still going.

“I’ve had a hard career, made hard work of it, but I’ve made it worth a watch when it is all over and made for a good story.  I started at the bottom, fought through the ranks and got to a world title eliminator.  I’ve two young kids who are hopefully proud of me — I could not ask for any more.

“I don’t need to fight any more financially, I’ve made some smart investments, so I fight because I love it.  My wife don’t want me fighting, especially since the kids, so I’ll be done soon.  It is a dangerous game.”

He added: “I was going to retire this year, I want to get out with my faculties intact and am aware that my style of fighting does put a lot of miles on the clock.  Then something inside of me said: ‘There are a few more (fights) in you yet’.  I was coming off a career best performance and then the American opportunity was offered to me by Eddie [Hearn] so I just had to take it.” 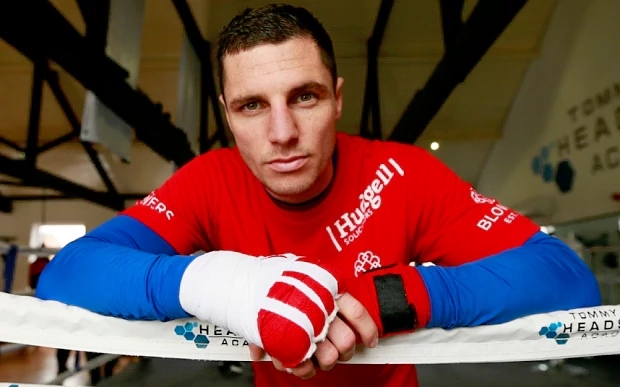 Coyle credits the turnaround with his acceptance that basing himself in Manchester during the week had become counter-productive.  A chat with trainer Jamie Moore led to a new training set-up.  Few would compare Coyle with Sugar Ray Leonard yet the all-time great worked with Dave Jacobs and Janks Morton in the early days of his camps then Angelo Dundee would come in to add some tactical tweaks.  Similarly, Coyle ticks over with Billy Dawson in Hull then spends a few days a week with Moore and his assistant Nigel Travis to spar and work on other things.

This switch up has proven successful and Coyle believes that the fact he has had a bit of a whirlwind career helps him get opportunities, he just has to go out there and make the most out of them.  “Eddie knows he will get a great fights from me,” he said.  “He wants exciting fights and that is what he will get.”

That said, fighting has been first and foremost his passion for many years, with boxing fans bearing witness to some good fights due to his commitment to entertaining the punters. “[For his 10th-round KO loss to Derry Mathews] I wasn’t quite ready to go on to that level at that stage,” he said before embarking on a verbal whistle-stop tour of his in-ring career.

“I’d have been on an even bigger stage in bigger fights if I’d won so it made me realise that I wasn’t the finished article and wasn’t ready to go up there just year.  Then I had that fight against [Daniel Eduardo] Brizuela [an up-and-down, foul filled 12th round stoppage win at Hull’s Ice Arena in 2014].

“It was certainly entertaining that one yet the Dodd one is the one where you look at it and think: ‘Where did that performance come from?’  But I do understand that Brizuela is the one that people remember for the ESPN Round of the Year, the points off and knockdowns, so I can be proud of that too.  If you ever get a bit bored then watch that fight again.

“Then it was Luke Campbell [L rsf 10 in August 2015], an Olympic gold medallist.  The [Craven Park Stadium] arena was sold out, the atmosphere was great, and the town centre was even closed off in the afternoon for the weigh-in.  It didn’t go my way, but so what?  I’m still here.  It was a great memory, I met Michael Buffer, had a great build-up and we brought big time boxing back to Hull.”

Despite still working on his boxing legacy, Coyle believes that it is his charity work that will stand out when the people of Hull talk about him.  The intention behind the not-for-profit Tommy Coyle Foundation and the Academies is to provide people with a place to go as well as helping them learn some life skills.

“Me and Billy Dawson, the Head Coach at the gym, have a good relationship in that he teaches them the boxing five days a week, which I can’t do yet as I’m still active as a fighter, but I help out with the mental side of things.  I try to explain to them that boxing is only part of their lives, you’ve got to create and build something for when you can no longer physically do those hard rounds.  I try to treat these kids how to fish, rather than handing them a fish.”