Tom Schwarz Back in Action on September 28 in Magdeburg

German heavyweight Tom Schwarz (25-1) will have his second fight, after losing to Tyson Fury in June in Las Vegas, on the date of September 28 at home in Magdeburg.

Schwarz headlines a SES promotion billed as Back to the Roots at the Town Hall. Who Schwarz will be facing will be announced in the near future. The undercard features heavyweight prospect Peter Kadiru (4-0), light heavies Adam Deines (18-1-1) and Michael Eifert (5-0), super middle Elvis Hetemi (13-1) and lightweight NenadStancic (5-0).

Schwarz also fought this weekend in the Czech Republic and stopped Radek Varak - and no, he is not suspended by the BDB, the Federation that licensed him and they are the ones who according to the long standing tradition in European boxing handles affairs like this. 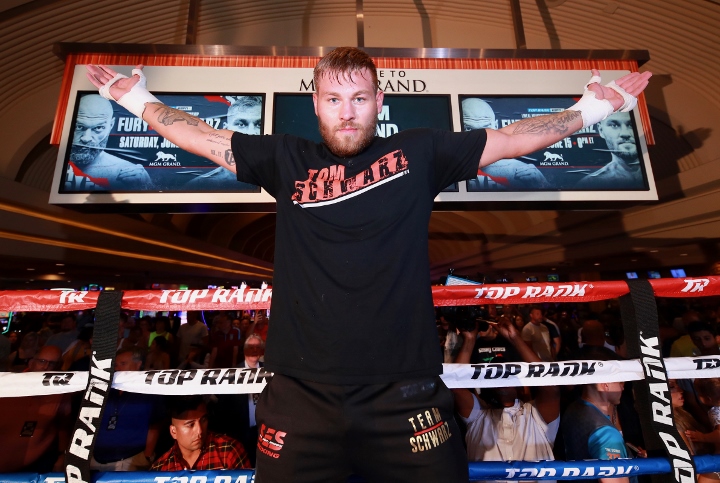 Kabayel´s mandatory defence of the heavyweight title against Joe Joyce has September 3 as deadline for agreement or purse bids while there is no news about Boesel, lightheavy ruler, but there´s surely plans being made. Boesel´s mandatory challenger is Igor Mikhalkin but there´s also other options.
...

Danish super middleweight Patrick Nielsen (29-3) returns as previously reported on October 5 in Gilleleje and earlier today the promoter, Q Boxing Promotion, announced the opponent. It will be Armen Ypremyan (9-1-2) that stands in the opposite corner. Ypremyan´s sole loss came last year against Nielsen´s stablemate Landry Kore.

Nielsen hasn't been in a professional boxing ring for a year and a half and his last win dates back to January 2017 so he´s got something to prove.

Better cop my tickets now before it's sold out!

[QUOTE=Loque-san;20000535]haha is Top Rank paying boxing scene to give updates about this can to make him seem relevant? Before he fought Fury even hardcore boxing fans weren't aware of his existence.[/QUOTE] I was, but I didn't rate him as a…