TOM LITTLE has felt the force of Daniel Dubois and Joe Joyce - but isn’t slow in giving his big fight prediction.

“I think Joe is going to beat him and I hope he does.” said Little.

Boxing is split over the outcome when the World’s top two Heavyweight prospects clash on Saturday November 28, live on BT Sport.

Little lost in five rounds when he faced Dubois in June 2018 and is often called up by Joyce for sparring.

He explained: “I have tossed back and forward over this fight. I’ve wrestled with it physically.

“When I say I want Joe to win, it’s not because I don’t like Daniel. I like Daniel, he is a nice boy and I have no hard feelings towards him.

“I just think it is a fight too early for him against someone who has big amateur pedigree and fought big names as a professional.” 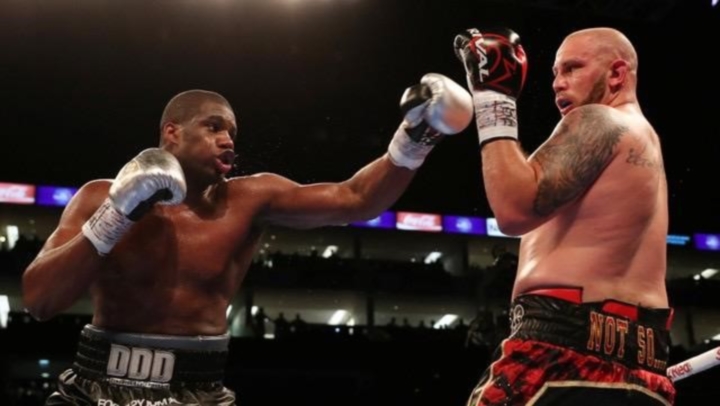 Little revealed he has also been giving tips to Joyce ahead of the triple title clash where Dubois defends his British and Commonwealth belts, with the vacant European championship also on the line.

He added: “The first minute of that fight is going to be so important in the fact that Joe needs to take his jab away.

“I can tell you first hand, Daniel Dubois has got a jab like a straight right hand. It hurts a lot, believe me.

“Joe knows this. I have spoken with him about it. I genuinely think that Joe is capable of taking that jab away.

Little who had a bad-blooded build up when he fought Dubois in an English title clash also warned that his old rival is in for shock when he lands clean on Joyce.

He said: “Hand on heart. I hit Joe on the side of the head with a shot that I would have thrown in a pub. I literally bent down, scratched my ankle and threw the shot.

“It was the sort of punch you’d throw on a punch ball machine on a booze up. I threw it with everything and he went back a little bit, but came straight firing back into me in the spar.

“Hurting him is going to be a problem for Daniel, but none of us are machines or robots.

“It is genuinely a fight where you look and you can make such a strong case for both.”

[QUOTE=jaded;20919779]I honestly can't gut his slow prodding style worked and I'll give him full credit for it. He did well and avoid the bog shots from Dubois which I didn't expect him to be able to do. I was wrong.[/QUOTE]…

[QUOTE=REDEEMER;20919030]For such a guy to slow to be good can you explain why he keeps winning ? Intelligently ?[/QUOTE] I honestly can't but his slow prodding style worked and I'll give him full credit for it. He did well and…

[QUOTE=jaded;20899731]Joyce already threw his first punch...it's expected to get there and slipped at the 2:32 mark of the first round.[/QUOTE] For such a guy to slow to be good can you explain why he keeps winning ? Intelligently ?

[QUOTE=REDEEMER;20899523]I would say Joyce will win this one ,it won’t have anything to do with speed because Joyce is fluid in transition of shots and timing . DDD is more explosive in moments but I doubt that works here ,…

[QUOTE=jaded;20899497]Joe Joyce's punches are too slow...he will get countered and KO'd by Dubois.[/QUOTE] I would say Joyce will win this one ,it won’t have anything to do with speed because Joyce is fluid in transition of shots and timing .…