It didn’t matter to TJ Doheny that his ring return was never slated to make the livestream portion of the evening.

Having his hand once again raised in victory was the only expectation to come out of Saturday’s undercard appearance at Wintrust Arena in Chicago, Illinois. The former junior featherweight titlist managed just that, flooring Miami’s Jesus Martinez and continuously applying pressure in forcing a stoppage after five rounds of untelevised action.

“Had a fantastic time in Chicago, topped by a TKO win to get back to my winning way,” noted Doheny (22-1, 16KOs) following Saturday’s performance. 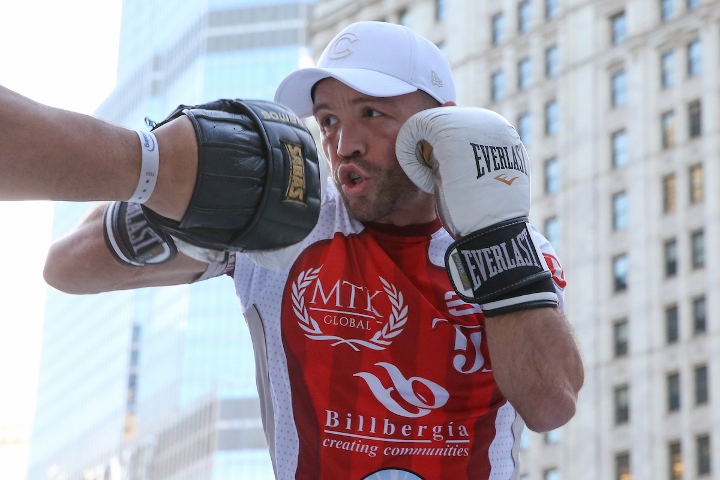 The status was a considerable dropoff from the previous ring adventure for Doheny, a 12-round majority decision defeat to Daniel Roman in their fiercely122-pound title unification bout this past April. That Fight of the Year-level war streamed live on DAZN, as did his lone successful title defense, an 11th round stoppage of Ryohei Takahashi this past January in New York City.

Saturday’s bout came just before the DAZN cameras began rolling, though serving its purpose all the same.

Interestingly, Doheny managed to make it back into the ring before his lone conqueror. California’s Roman (27-2-1, 10KOs) was due to make a unified title defense versus mandatory challenger Murodjon Akhmadaliev (7-0, 6KOs) in September, only to have to withdraws and postpone after suffering a pre-fight shoulder injury. The downgrade from a muscle tear to tendinitis put Roman on the shelf for six weeks, with the expectation of returning to the ring either later this year or in the 1st quarter of 2020, presumably in a rescheduled mandatory versus Akhmadaliev.

As Doheny is eager to return to the title picture, it could mean pursuing either Rey Vargas (34-0, 22KOs) or Emanuel Navarrete (29-1, 25KOs), both of whom hail from Mexico. Navarrete is co-promoted by Top Rank and fights primarily on ESPN, not to mention he’s previously mentioned a move to featherweight is inevitable barring a unification bout. That would leave Vargas as a primary target if his next fight needs to be for the title.

Fate will determine what awaits his future. Fornow, being back in a position to once again challenge for a major belt will do.

"Which route I take to getting back on top doesn’t concern me,” insists Doheny, who expects to fight for a title in the first half of 2020.

Navarette is about to move to 126. He should fight Vargas.