Timothy “Desert Storm” Bradley Jr., the former two-division world titleholder and one of the best pound per pound boxers, has agreed to a new multiyear contract extension with ESPN, it was announced today.

Under the agreement, Bradley will continue to serve as boxing analyst for Top Rank on ESPN, alongside Joe Tessitore and Mark Kriegel.

“Tim’s expertise as a former champion, combined with his passion for the sport, makes him an incredible analyst for Top Rank on ESPN,” said Mark Gross, ESPN senior vice president, production and remote events. “He brings a wealth of knowledge and passion to his analysis and we look forward to his continued contributions to our telecasts.” 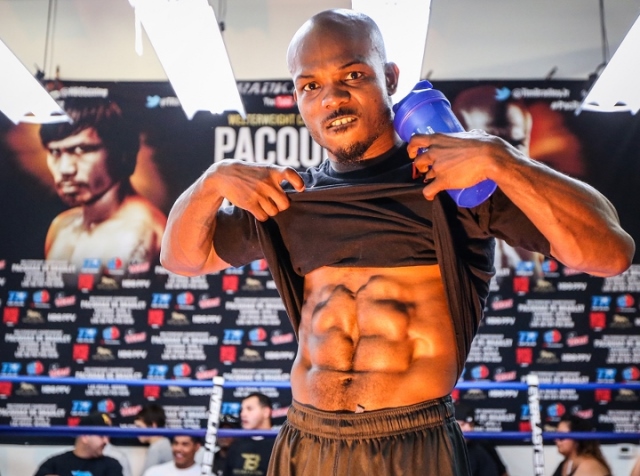 “Bob Arum, Todd DuBoef and Top Rank were instrumental in helping make my career a legacy and have now joined forces with ESPN to create the best boxing platform available,” said Bradley.  “It is an honor and a blessing to be part of this platform and to sit alongside Tessitore and Kriegel and be part of the rebirth of boxing on national television.  Thank you to Top Rank and ESPN for giving me a chance to be here. I promise to deliver the fans the best insight possible for many years to come.”

Bradley held five world championships in two weight classes.  He retired in 2017, finishing his career with a record of 33-2-1, with 13 of his victories by way of knockouts. He won his first world title fight, light welterweight, in 2008 when he upset champion Junior Witter in England.

In 2009, he fought Kendall Holt to unify his WBC and Holt’s WBO titles, winning the fight by unanimous decision and becoming the new WBO champion. In 2011, Bradley had his most notable win up until that point of his career, when he defended his WBO junior welterweight title in a unification fight against then undefeated Jr. welterweight champion Devon Alexander.

In 2012, he defended his WBO junior welterweight title against former lightweight Joel Casamayor and later moved up to welterweight to claim Manny Pacquiao’s welterweight belt, defending the title in a fight with Ruslan Provodnikov in 2013. Seven months later, he defeated junior lightweight and WBO junior welterweight champion Juan Manuel Márquez by split decision. Bradley is particularly known for his trilogy of fights against the then unstoppable Manny Pacquiao, whom he fought in 2012, defeating him in their first of three fights. They faced off again in 2014 and 2016, with Bradley losing the next two bouts by decision.

From Palm Springs, Calif., Bradley began training as a professional boxer in his late teens.  In 2004, at the age of 21, Bradley fought Francisco Martinez in his first professional fight, which he won in the second round by knockout.

[QUOTE=MONGOOSE66;18903106]Id personally would rather deal with a honest a$$hole than a dishonest liar who has good manners.[/QUOTE] You'd be in the small minority. ESPN is going to have to appeal to the masses for business purposes and so they made…

I thought he was coming back when I seen this.

[QUOTE=Raonic;18902741]That's a big problem. The delivery is extremely important. And he's so bad at his delivery, no one wants to listen to his even if it may be true. Whereas guys who are obviously biased have the ability to manipulate…

[QUOTE=MONGOOSE66;18897325]His true fault is over acting to the truth.[/QUOTE] That's a big problem. The delivery is extremely important. And he's so bad at his delivery, no one wants to listen to his even if it may be true. Whereas guys…

[QUOTE=BostonGuy;18897040]Bradley is professional unlike Atlas. I like Tim as a commentator and wish him the best[/QUOTE]Teddy Atlas calls out the bullsh*t, and I like that! Horn was a hypejob from the jump!