Thurman: Two Years Out And I Still Have The Best Resume at 147!

As talent laden as the welterweight division has remained through the years, getting the absolute best to fight one another is a different story.

A far more daunting task has been in pairing together unbeaten welterweight titlists. In fact, it’s only happened twice in the 30 years that Keith Thurman has been alive, with the Florida native involved in the most recent of the two occasions.

Thurman’s 12-round win over Danny Garcia in March 2017 came more than 17 years after Felix Trinidad scored a controversial majority decision over Oscar de la Hoya. The Sept. 1999 affair was a financial blockbuster, at the time establishing the box-office record for the best performing non-heavyweight Pay-Per-View event in history. 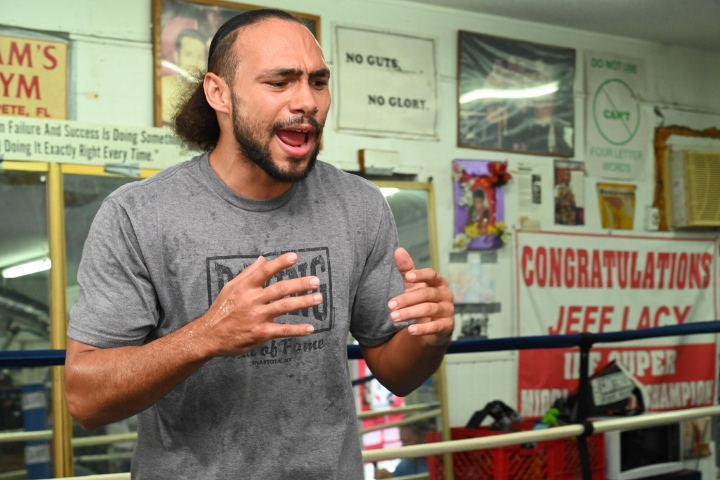 What the bout lacked, however, was sustained action of any kind, as the event played more like two boxers scared to risk their unblemished records.

Mind you, Thurman-Garcia wasn’t exactly a Fight of the Year contender—in fact, from an action standpoint it paled in comparison to Thurman’s prior fight, a June 2016 win over Shawn Porter. Still, the CBS-televised headliner proved memorable in its own right, in particular to the winner whom established himself as the class of the welterweight division.

"This was two undefeated welterweights going toe-to-toe in the prime of their careers,” Thurman (29-0, 22KOs) recalled of the unification bout ahead of his July 20 superfight versus former eight-division titlist Manny Pacquiao. “Danny Garcia's a sharp puncher who won the WBC's vacant title that Floyd Mayweather gave up for retirement.

“But after beating Shawn Porter, I knew Danny would be an easy fight. This was my first chance to beat an undefeated world champion, and I came out swinging on him in round one to make a statement that his world title was about to be mine.”

It didn’t quite play out as an easy affair, as Thurman had to settle for a well-earned split decision to leave Brooklyn’s Barclays Center with two belts in tow. He left a winner, nevertheless, in the only such unification bout between two unbeaten welterweights in the 21st Century, with the next one not likely to come until 2020 at the earliest.

Given his track record, there’s a chance Thurman can be involved in that one as well. There are several factors in play, of course, in order to get to that point. The undefeated 30-year old is joined by Errol Spence and Terence Crawford’s as unbeaten 147-pound title claimants.

The hope was for the latter two to finally meet later this year after having spent the past several months going big dick with one another. Spence (25-0, 21KOs) is destined for a unification clash versus Porter (30-2-1, 17KOs), while Crawford (35-0, 26KOs) will likely settle for a hometown (Omaha, Neb.) showcase versus undefeated but unproven contender Egidijus Kavaliauskas.

Then there’s the matter of Thurman having to get past Pacquiao, still a dangerous welterweight threat even at age 40. The two collide atop a Fox Sports Pay Per View at the MGM Grand in Las Vegas, with the winner in prime position to serve as the most lucrative option in the welterweight division.

Thurman will fight for the second time 2019, both coming after having been out of the game for 22 months following his aforementioned win over Garcia. In the time between that night and his 12-round nod over Josesito Lopez this past January, little movement had been made at 147—plenty of new titlists crowned, sure; but nothing in the way of a blockbuster event befitting one of the most storied division’s in boxing history.

Now that he’s back, the long-reigning welterweight titlist is once again prepared to take up the mantle.

“I am going to prove it once again versus Manny Pacquiao on July 20th. After that, once 2020 comes around we’re ready to prove it against everyone else who’s ready to step up. I’m talking about Errol Spence…Terence ‘Bud’ Crawford… Shawn Porter, Danny Garcia.”

[QUOTE=Letmaku;19894546]Thurman, Porter and Garcia are not yet considered hall of famers to be!?[/QUOTE] Not Porter. Still has a score to settle with Ugas as far as I'm concerned. Ugas got screwed in that fight and should have a crack at…

Thats funny since he doesn't even have the best resume in the fight. He should have really cracked a joke and said he's the best welterweight! That would have had us all laughing!!

[QUOTE=SplitSecond;19894124]He injured his hand coming back last year. Disprove it. You can’t. Some of you are weird. Spence should channel that energy into a physical force rather than just audio, so he can send thurman a contract. Then we can…