Keith Thurman knew from the moment he was prepared to return to the ring, that a blockbuster event would be in his future.

He didn’t know it would happen this soon into his comeback, nor against the most notable active fighter in the world today. Still, his upcoming welterweight title defense versus Manny Pacquiao is one of which he’s dreamed even long before establishing his own place atop the talent-rich 147-pound division.

“I wanted this fight six years ago at the MGM Grand,” Thurman (29-0, 22KOs) noted during a recent media conference call to discuss the July 20 Fox Sports Pay-Per-View headliner. “It was before Pacquiao and Floyd Mayweather fought. We already had opinions on who would win before the fight was ever made.

“I was always rated in the Top 10 for many years before I became a world champion. I always thought we would have a great fight if it was ever made. It just goes to show dreams can come true. I have pride, I have passion and I’m grateful for this fight.” 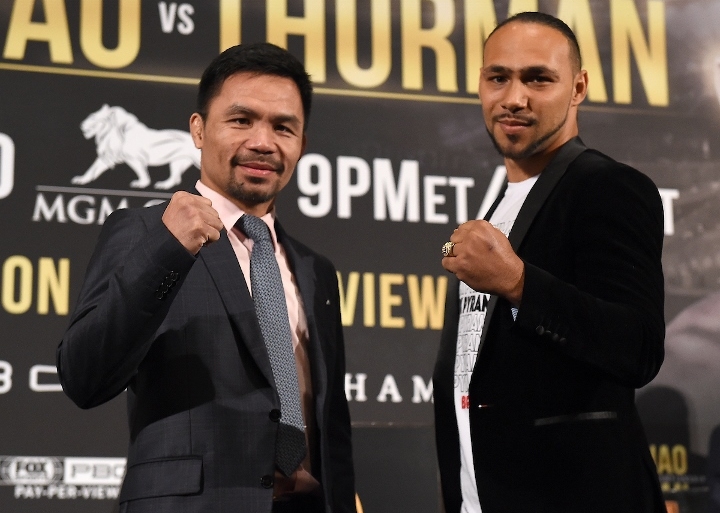 Thurman’s name was called a few weeks after he and Pacquiao (61-7-2, 38KOs) both scored wins this past January. The 30-year old Filipino southpaw—whose title wins in eight divisions remains a boxing record—enjoyed a landslide 12-round win over former four-division title claimant Adrien Broner, one week before Thurman ended a 22-month hiatus with a decision win of his own over Josesito Lopez.

It has been suggested that the 30-year old Florida native looked vulnerable enough to convince Pacquiao to call his name for the upcoming midsummer blockbuster. Whatever the case, the unbeaten welterweight titlist is basking in the glow of what is easily the biggest fight of his career.

“Manny Pacquiao has had an amazing career, 70 fights and still going strong.” Thurman notes of the future first-ballot Hall of Famer, comparing his upcoming rival to the greatest who’ve ever performed in the ring.

[QUOTE=cjeagle1;19891401]How do you know that? Neither Duran nor Robinson was tested during their time and steroids abuse by athletes started in the 1950's so we don't know if Duran used them. Pacquaio has been taking tests given by USADA and…

Keith is a joke.

No Keith, you're fighting the legend without 'franchise belt'.

[QUOTE=ceylon mooney;19891053]eh, not the dumbest thing "some time" has said recently. not quite duran-barkley. its kinda like vinny paz-duran.[/QUOTE] It's a Duran Barkley situation. Pac's skill and accuracy will lead to dramatic knockdowns.