Thurman Has Surgery on Left Hand: I Felt Pain in Pacquiao Bout

Former welterweight champion Keith Thurman revealed that he underwent surgery on his left hand on September 4. (photo by Ryan Hafey)

The injury will prevent him from returning until the first quarter of 2020.

Thurman snapped a near two year layoff earlier this year, after undergoing elbow surgery in the aftermath of his twelve round decision win over Danny Garcia in March of 2017. 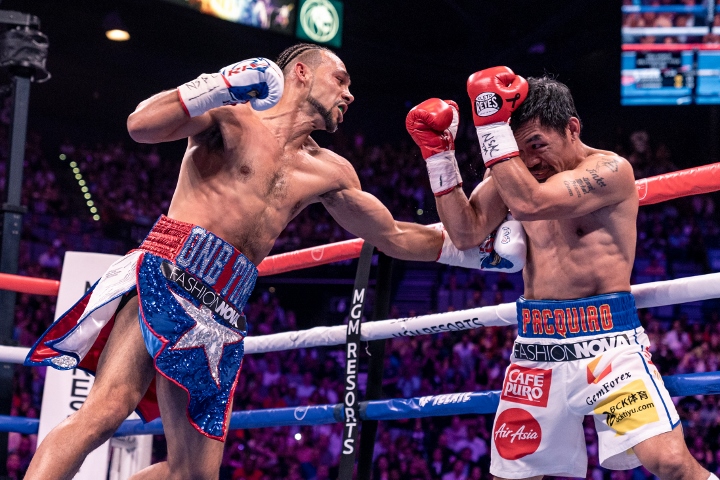 Thurman did not return until January of this year, when he won a tougher than expected twelve round decision over Josesito Lopez.

Then he was back in July, when he suffered his first career defeat at the hands of Filipino superstar Manny Pacquiao at the MGM Grand in Las Vegas. Thurman went down in the first round, but he rallied down the stretch to lose a split decision on the cards.

He initially planned to take one more fight before the year was out, but now he plans to recover.

“The surgery was a bone fusion, so they fused some of my metacarpals,” Thurman said to Yahoo Sports.

“There is not an issue with my fingers or the knuckles that I make a fist with. It feels so much better now. Right after surgery, it was quite painful with a lot of initial swelling. Right now, it feels good and it’s not swollen as it was. I’m not on any pain meds or anything.”

According to Thurman, this injury has been there for quite a while and caused him pain in both of his bouts in 2019. The pain also bothered him as he prepared for both bouts.

“It bothered me in camp and disrupted my preparations more than anything, which is another reason I decided to get the surgery now instead of waiting and doing it later. I can’t promise I would be the same Keith Thurman and I couldn’t promise a great comeback if I were to keep fighting in the condition I was in.

“Losing to Pacquiao is evidence you can’t be a one-handed champion. If you really want to be the best in the world, you have to be the best you can be to fight any type of world-class fighter. Even with one hand, I fought a hell of a fight. I needed to throw more right hands and the fight was there. The opportunity was there. I felt him wearing down and I could feel him struggling a little bit. At the end of the day, I didn’t win, but I felt I had what it took to win.”

[QUOTE=Richard G;20232552]You pactrads cheat and lie, why is that?[/QUOTE] baby brains.. poor nutrition... so they gravitate to excuses and lies.... rich pinoy's don't think like these tards.

[QUOTE=Phenom;20072048]Taking a page from Pacquiao even had surgery and everything[/QUOTE] exactly... but pinoy boy toys... wont see it like that.. pac is pinoy god

[QUOTE=FredRekk;20232523]Correct! Another PRIME UNDEFEATED CHAMP dethroned by Senator Manny!! The Mexicutioner as they call him!! Picked Thurman apart, start to finish![/QUOTE] You pactrads cheat and lie, why is that?

[QUOTE=Richard G;20232385]Packy picked another prime boxer to fight for a great win. But damn he is good at picking those prime undefeated champs.[/QUOTE] Correct! Another PRIME UNDEFEATED CHAMP dethroned by Senator Manny!! The Mexicutioner as they call him!! Picked Thurman…

Can't pass up that Pac check, though.