Thurman: My Time Now, I'll End Pacquiao Like He Did De La Hoya

WBA welterweight champion Keith Thurman has a lot of respect for Manny Pacquiao, who captures titles in a record eight weight divisions.

But he still expects to end the career of the Filipino superstar on July 20th.

Pacquiao will challenge Thurman for his world title, in the main event of a Fox Sports Pay-Per-View from the MGM Grand in Las Vegas. 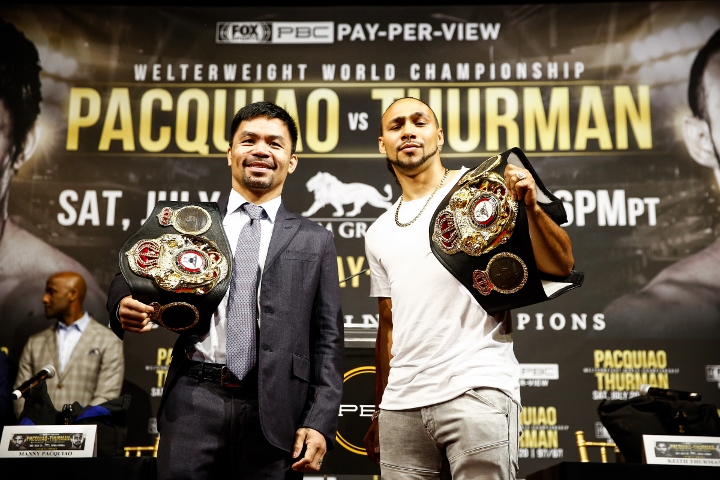 Thurman is plotting the end of Pacquiao's career.

The WBA's "regular" champion at 147-pounds is now 40-years-old and nearing the end of the road.

Thurman wants to push him off the ledge to retirement.

In 2008, Pacquiao shocked the odds by dominating and stopping Oscar De La Hoya, who quit on his stool and retired afterwards.

Thurman wants to end Pacquiao in the same manner.

"Props to him and his beautiful legacy, but he will fall short. I always look forward to dismantling my opponents, destroying them, and showcasing my skills and talent each and every time I am in the ring. And I want to give Manny a proper farewell from the sport of boxing."

At the same time, Thurman respect Pacquiao for accepting a fight with a much younger, undefeated world champion.

"It's a great fight, great opportunity. It's an honor to share the ring with Manny Pacquiao. I've watched him throughout his career. I was at the Floyd [Mayweather] — Pacquiao fight [in 2015] and I've wanted the fight for many years," Thurman said.

"Manny Pacquiao really is a true warrior and fighting the likes of me, 29-0 and 22 knockouts at the age of 30, proves that Pacquiao is willing to step in the ring with anybody and give the fans a great fight. I'm really honored … but I do plan on separating myself from him with my skills and talent, and showing why I am the World Boxing Association (super) welterweight champion of the world."

The Pac-Man will get KT to quit via bodyshots

I just can't believe how much of a favorite thurman is among a lot of ppl. Thurman has never convinced me, he seems to struggle against any decent fighters I don't see how he's gonna mop up pac, sure he's…

Oscar was a corpse at the time, he didn't make that weight in like 10yrs.... Staying fit does some good things for a 40yr old Manny. He seems to love the gym even when in office, so things like TKOing…

Pac Man hasn't reached gatekeeper level. This is a 50/50 fight.

Pac is game. Deep Game ! Maybe DeadGame! We don’t know cause he ain’t dead but this one thang I know he was the GREATEST FIGHTER OF HIS TIME! Ol peckerhead couldn’t carry his jock strap if you want to…