Thurman: I'm More Open To A Rematch With Porter Than He Might Believe

Keith Thurman has never felt the need to respond to everyone who’s ever mentioned his name. Recent claims about his willingness to take on certain challenges, however, most certainly caught his attention.

The former unified welterweight titlist came up as a possible future option for his old divisional rival, Shawn Porter as both remain on the hunt for an opponent following their respective title fight losses. As previously reported by BoxingScene.com, Porter (30-3-1, 17KOs)—a former two-time welterweight titlist—remains skeptical of the two ever running back their June 2016 classic, where Thurman claimed a well-earned 12-round decision in Brooklyn, New York.

“I’m not sure,” Porter admitted on the prospects of a second fight happening during a recent interview on Impact Network’s Stars and Champions: Special Edition series. “Keith has been through a lot in and out of the ring, with injuries and things of that nature.

“I’m not sure he can look at himself knowing that he may not be 100% and will be ready to take on a challenge like me.” 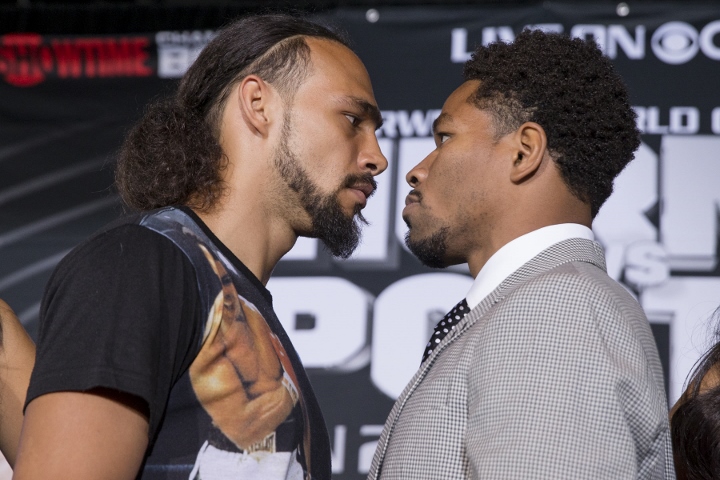 The claim is a curious one, considering the circumstances that went into their prior encounter. The two were due to collide in March 2016, only for Thurman to sustain injuries in a single car crash which—between the recovery period and television network availability—forced a postponement of more than three months. Thurman went straight into the fight, not looking for a tune-up but rather proceeding with his title defense.

“I mean, I fought him after eight weeks of whiplash,” Thurman (29-1, 22KOs) noted to BoxingScene.com when asked about Porter’s claims. “At the end of the day, I feel I have what it takes to beat Shawn Porter on any given night.”

Along with most other boxers, Thurman remains uncertain as to when he will be able to return to the ring. The sport has come to a grinding halt since mid-March due to the ongoing coronavirus disease (COVID-19) pandemic. Top Rank Inc. will begin hosting closed-doors events in June, with other outlets—including Premier Boxing Champions (PBC), under whose banner Thurman has proudly fought since its inception in 2015—looking to follow in the coming summer months.

Thurman hasn’t fought since a heartbreaking loss to legendary Manny Pacquiao (62-7-2, 39KOs), with the July 2019 loss ended his lengthy title reign and his days as an undefeated fighter. Any matchup for his first one back is on the table, even a rematch with Porter—although, not just for the sake of taking any fight.

“There is a part of me that would almost—I would have to look it over with my team,” notes Thurman, who previously held some form of a welterweight title since July 2013. “I would love the Porter (rematch) but I don’t know if I would love it enough for what it’s worth right now. Is the winner guaranteed a title fight? It all depends on the stipulations, I guess.

Both remain in the hunt for Pacquiao, an eight-division and reigning welterweight titlist who remains far and way the biggest draw in the division. At some point, he will pick an opponent for what would presumably be his lone fight of 2020. Absent either Thurman or Porter landing the coveted assignment, revisiting a second go-round would make the most sense.

After all, the first time around provided plenty of entertainment, both in and out of the ring.

“I love the rivalry with me and Shawn. I can see the trash talking already,” admits Thurman. “It’s so easy to talk trash with my buddy there. He will have so many of his opinions. I can see the back and forth. I’m gonna dog his suit and ties. It is what it is. It’s fun.

“I think would have a lot of fun fighting Shawn again, actually. I’m more open to it than he might actually believe. So, let’s see what happens.”

People are always open to more things when the options are limited.

Thurman will come back stronger.. He had to regain that hunger... He's from my neck of the woods so I gotta ride with him.. until the end my friend.

[QUOTE=KayDub;20594431]Lol Thurman has said he'd fight Spence. Spence is the one saying he doesn't want it. Spence is a diva.[/QUOTE] This. He ducking Thurman.