Thurman: I'm Just Excited To Be Back And Living My Dream

Barring a perfect existence where he could hand-pick when the biggest fight of his career would take place, Keith Thurman couldn’t be more thrilled with his next ring adventure.

The unbeaten welterweight titlist will headline his first Pay-Per-View event, coming against a legendary fighter who’s been here many times before in Manny Pacquiao. Their July 20 title fight will top a Fox Sports PPV event that is loaded from top to bottom.

Under any other circumstances, it’s a dangerous place to be for a 40-year old boxer against an unbeaten titlist. When that boxer is Pacquiao and the unbeaten titlist is just six months into a comeback following a near two-year absence, we’re left with a virtual pick-‘em, never a bad thing for a major PPV show.

“I’m just excited to be back and living my dream,” Thurman (29-0, 22KOs) told BoxingScene.com. “Nobody knows what it felt like for me to not be able to participate in my own career at 28, 29 and in my prime. I was a unified champion before getting injured and now I’m down to one belt.

“That one belt was enough to land a fight of this magnitude, which almost makes up for the two years I was inactive.” 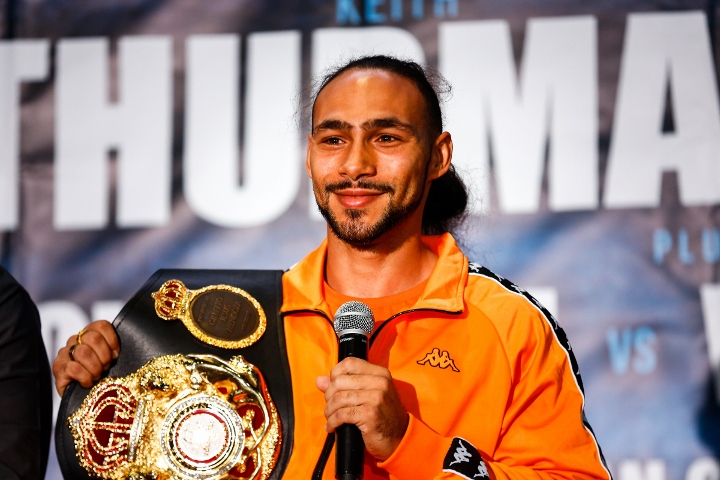 Thurman has held some form of a welterweight title since 2013, and a full version for more than four years. He became a unified titlist following a March 2017 win over then-unbeaten Danny Garcia in their Premier Boxing Champions (PBC) on CBS primetime headliner, marking Thurman’s last fight for another 22 months.

The 30-year old Florida native returned this past January, having to settle for a majority decision win over Josesito Lopez this past January. By then, he was down to one belt—the WBA title, as his WBC belt was put up for grabs and eventually obtained by Shawn Porter—whom Thurman outpointed in June 2016—in his own win over Garcia last September.

Still, it was his name chosen when Pacquiao (61-7-2, 39KOs)—whom outpointed Adrien Broner on January 19 in his PBC debut—was looking for a worthy foe for July 20.

“Nobody knew who he was going to pick, and quite frankly you can’t go wrong at welterweight,” notes Thurman. “There’s no easy fights for any of us, especially once you get to the top five or six in the division.

“I was fortunate to return to the sport with one title still in my possession. It was enough to make me an active champion and why Pacquiao (who holds a WBA secondary title) considered and picked me for this fight. Let’s say I didn’t have this belt, he could’ve overlooked me to fight another titlist, or anyone in the top five at welterweight and it would’ve been a great fight.”

For Thurman, it’s a massive upgrade from what he had previously envisioned of his 2019 campaign. The fight with Lopez was intended as a welcome back, with one or two more fights expected against mid-to-upper tier contenders before chasing the big guns in 2020.

Everything changed once he got the call to face Pacquiao, although his long-term vision remains very much the same now that he’s fully healthy and all the way back.

“I already beat Shawn Porter. I already beat Danny Garcia. But they’re still relevant in the division today,” notes Thurman. “So those guys, (unbeaten IBF titlist) Errol Spence—you already know all the top guys, I don’t have to run through all their names, but all of us will be around for years to come.

“With Manny Pacquiao, he doesn’t have five years left. Probably not three and maybe not even one year left. I keep promising that I’m going to retire him on July 20 and I mean that I’m going to beat him to the point that—he can decide to do whatever he wants after that and he’ll always be worth money. But for me, it’s on to everyone else in the division beginning in 2020 because we’ll all still be here by then.”

Get your retirement check and go away!

Thurman has gone down massively in my estimation. If you're clean fighter especially against a fighter with a question marks against his name how could you not want VADA?

Lol. I still can't believe A guy like Jeff horn has (W) manny Pacquaio on His resume with 19 only fights. ****ing bumarron

The Pac-Man will turn your dream into a nightmare.

Keiths movement and accuracy is top notch as long as he doesn't stand and trade he will give Manny fits. I sure do hope that was ring rust in his last fight though. If the same Keith that showed up…