Thurman: Give Me Four Years, I Can Make Jameis Winston A Contender

There’s a lot about Jameis Winston to which Keith Thurman can relate, which made for a pleasant recent gym session between the pair of Florida-based star athletes.

The two met at St. Pete Boxing Club in St. Petersburg, Florida, the humble facility where Thurman has trained from the moment he laced up his first pair of boxing gloves. This particular meeting was for Winston—a stud athlete in football and baseball in college at Florida State University and current NFL quarterback—to perform cross training, for which his team decided that boxing was the best fit.

It proved to be the perfect choice.

“It was a great day in the gym. It was a lovely experience,” Thurman (29-1, 22KOs) told BoxingScene.com of their extensive workout session on Thursday. “Winston is a tremendous young athlete. He’s still got room to grow but his workmanship was that of a true champion. It was a pleasure to have him in the gym.

“I felt like the gym has been blessed by another champion.” 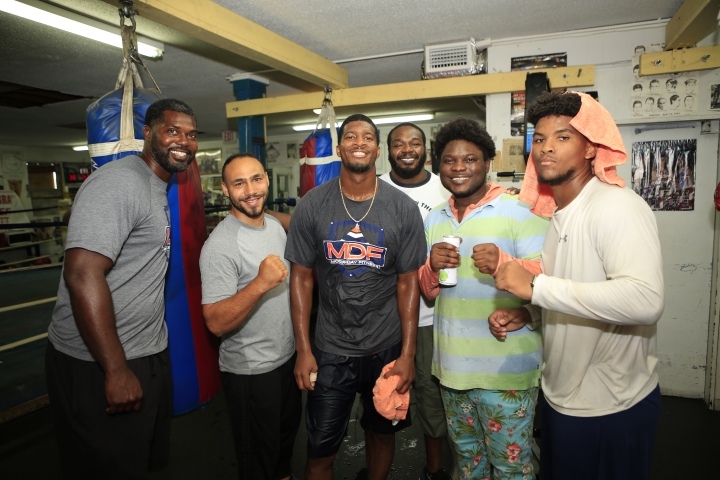 A conscious decision was made by Winston—the 2013 NCAA Heisman Trophy and five-year quarterback with the Tampa Bay Buccaneers—to make the drive from Tampa to St. Pete, learning the craft straight out of a facility that has birthed three world champions. Ronald “Winky” Wright and Jeff Lacy both enjoyed overlapping title reigns during their respective primes earlier this century, while Thurman’s comeuppance came around the same time Winston enjoyed arguably his greatest year ever on the gridiron to date.

Thurman won a secondary welterweight title in 2013, just prior the start of the 2013 NCAA college football season that would see Winston lead Florida State to the national championship as a freshman. The Alabama-born baller earned Player of the Year honors while engineering a 34-31 win over Auburn in the National Championship game to cap a perfect 14-0 season.

Winston has gone on to shatter records both in college and in his five years with the Buccaneers. The hope is for the 26-year old to eventually produce the same kind of magic with the New Orleans Saints, where he will play this upcoming season. As for Thurman, his goal is to re-emerge as the leading welterweight in the world, having reigned as a full titlist since 2015, and as unified champ following a March 2017 win over then-unbeaten Danny Garcia (35-2, 21KOs). His overall reign and unblemished record came to a close following a narrow points loss to legendary Manny Pacquiao (62-7-2, 39KOs) in their title consolidation clash last July.

The parallels in the respective careers of Thurman and Winston aren’t just limited to their respective achievements in the ring or on the gridiron.

“His team is very strong. His right hand man goes by Coach O, he had him as a teenager into the pros. It reminds me of my Ben Getty story,” Thurman noted, fondly recalling his early years with his original trainer, who passed away on this very weekend in 2009. “I’m just real happy to see young athletes sticking with the people that got them there.

“Ben Getty always taught me, don’t forget where you come from. The people that helped you get there before you were worth a dollar, before you were worth a scholarship or any kind of paycheck of any sort, are always the ones who always believed in your abilities and skills. I’m just always glad, on boxing terms, that he has someone strong and dedicated like that in his corner throughout his career.”

While the hope for Winston is to make a splash with a new team, he at least heads to Louisiana with a new skill. It being his first attempt, naturally there remains a lot to work through. Should he ever choose to revisit, the door at the St. Pete Boxing Club will always be open for him.

“The funnest part about training him was that, I could’ve done anything. I could’ve thrown the whole booklet at him,” notes Thurman, who has trained under the watchful eye of Dan Birmingham for more than a decade. “That’s a real champion. Tremendous athlete ready to perform, ready to do it all. When you come across that kind of hard spirit and soul, it’s like all you need is a coach.

“Just the way that he worked and pushed and did the drills, and that never-give-up mindset, he was willing to go as hard as we were ready to push him. He was ready to work through the bell. He’s 26 year old. You give me four years and I can make him a heavyweight contender!”

For now, he’ll just settle for watching his friend enjoy a productive season in a new setting.

“He’s in shape already. I look forward to seeing what he does this upcoming season. Our house, our gym is always open and I hope to get the opportunity to work with him again. He seemed to really enjoy himself.”

[QUOTE=emceetns;20586106]Professional athletes do cross-training all the time and plenty of people do boxing for fitness. It's not like Winston said he could beat Tyson Fury; he is just incorporating something extra to get ready for football season. Nothing wrong with…

[QUOTE=Robi13;20585209]This that disrespect and that bs that people be doing... someone should phuck Winston up to show him to stay in his lane... clout chasin is all this bs is.... Keith should know better 🤦*♂️[/QUOTE] Professional athletes do cross-training all…

[QUOTE=GrandLolo;20585347]Its not even close with Pacquiao. Competitive but def not close.[/QUOTE] The KD won Pac the fight. Without the KD the judge's would've even given to to Thurman.

Its not even close with Pacquiao. Competitive but def not close.

This that disrespect and that bs that people be doing... someone should phuck Winston up to show him to stay in his lane... clout chasin is all this bs is.... Keith should know better 🤦*♂️