Las Vegas’ battle-tested light heavyweight contender, Lionell “Lonnie B” Thompson 21-5 (11KOs) made an exciting return at tonight’s Sin City Showdown inside The Club at Cannery Casino & Hotel with a TKO decision against Scott Sigmon 34-14-1 (17KOs) after 7 rounds of action. The 10-round battle between Cameron “Suave” Krael 16-15-3 (4KOs) and Gabriel Duluc 15-3 (4KOs) ended in a majority decision for Boston’s Duluc.

Lionell Thompson put up a great performance against Bedford, Virginia’s Scott Sigmon after being out of the ring for a year. Thompson kept the pressure on Sigmon with blows to the head and body, and beautiful combinations. After seven brutal rounds of action, Sigmon’s corner stopped the fight.

“I was a little rusty coming into this fight after a long layoff,” said Thompson. I was in shape though, I was able to pick it up, I picked it up in the later rounds. He was really awkward; it was tough finding a few openings. He’s tough, he can take a punch, hats off to him. I’d rate my performance a 7, I need to get back in the gym and work on my inside game and I’ll come back sharper.”

Sigmon was unavailable to give a quote post-fight due to injury. 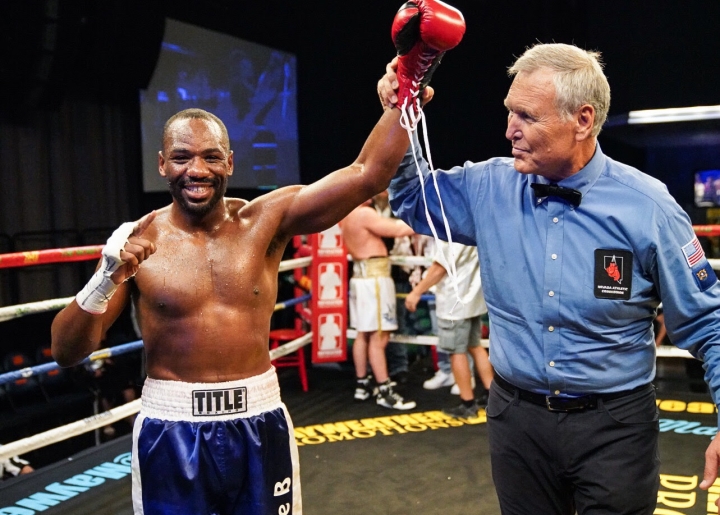 Krael who’s typically known as a brawler in the ring, took a more patient and tactical approach during 10 rounds of action against Duluc. Krael striked when he saw opportunity against Duluc knocking his head back a few times during the middle rounds. By round 5, Krael was confidently walking through Duluc, delivering non-stop attacks to the body. The Boston native regained his momentum and judges ultimately favored Duluc giving him the majority decision.

“I didn’t do enough,” said Krael. I had a different game plan than I normally come in the ring with. I was more patient, maybe a little too patient and it showed. I should’ve got him out and I didn’t, I’m just disappointed in my performance. There’s a lot of things I need to work on, my conditioning, my head movement, and strength.”

“I feel that I could’ve used my jab a little bit more, said Duluc. “I got hit a little bit too much, but overall I think it was okay. He’s stronger than I thought he was going to be, he’s a strong kid. He likes to go to the body hard, so I was trying to cover up when he did that. I used my jab and moved to stay away from the big shots. I feel that I could’ve took less punches and focused on my defense. I’m going to back to the gym and continue training hard to get better and better each time. That’s my plan.”

Uzbekistan’s Sanjarbek “War” Rakhmanov 12-2-1 (5KOs) broke his opponent down, delivering punishment to the body for 4 straight rounds, which ultimately led to Andre Byrd taking a knee and ending the fight after round 4, and Prince Rock Myrthill 16-0 (14KOs) was victorious in his feat against Dallas, Texas native, Jonathan Steele 9-6-1 (6KOs) who got the win in their 8-round bout.

The opening bouts of the evening that led to the main event inside The Club at Cannery Casino & Hotel were action-packed and kept the crowd chanting well on into the main event.