"The night it happened (knocking out Nozipho Bell for the IBO World super-featherweight championship), Terri had been on a few Matchroom shows and we spoke to Eddie on the run up to that and his words were: 'Just keep her winning; we'll keep an eye on her'. A video went out of Ray (Doyle) embracing Terri and she goes to the crowd and crowd were going mental. That got tweeted and literally straight away Eddie had seen it and congratulated us and I said: 'I'll be ringing you next week, Eddie. Get the contract ready', and I think his reply was: 'It's there for you', or something like that.

"Literally that night Terri won the IBO (world title) and we made a bit of history. We did it ourselves; small-hall promoting and no financial help with TV or stuff like that. It were very hard but we got over the line because of Terri's support. A year ago yesterday, IBO super-featherweight champion of the world and life's been a rollercoaster since then. It could do with slowing down sometimes! We're setting up a foundation: the Terri Harper Foundation - Believe and Achieve; looking to give some things back. Terri's going to be heavily involved in that."

He continued, "She had a defence against (Viviane) Obenauf; a cracking performance, wide points win. Then she was straight out in a unification, IBO & WBC, against Eva Wahlstrom which were a massive step-up and a few in boxing thought it was a little too soon, to be fair. What a night that was." 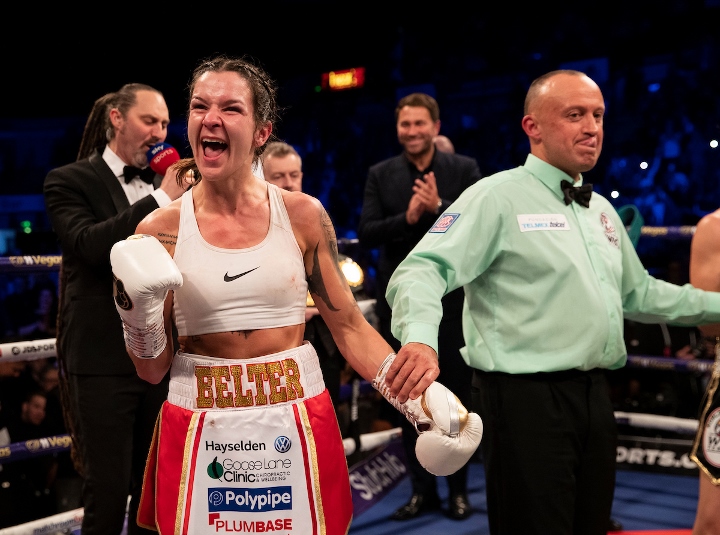 That win over long-reigning WBC World champion, Eva Wahlstrom was the undefeated champion's breakout victory. Few female fights on British shores had generated such interest and intrigue. Sheffield Arena, just twenty-minutes from Harper's home, was packed with her fans eager to see her make history. The Sky TV cameras were on hand for a master class as Harper beat the veteran champion despite displaying several flaws that she believes she shouldn't have made.

"We've watched it back a few times. Matchroom were in the other week filming, so we watched it back then as well. Just watching it makes me cringe because there's loads of things I were doing wrong," Harper surprisingly admits. "Things that I never (normally) would have done, but I think it depends on who I'm in ring with. That night were amazing and it's memories that will last a lifetime and it were a great achievement."

Her popularity and ticket-selling ability seemingly knows no bounds. Harper personally sold around 1,000 tickets which, sat from ringside, gave the impression that her co-main event slot, in hindsight, should have been the main event. The actual main-event that night suffered as Kell Brook easily swept through Mark DeLuca in front of a subdued crowd.

Attention now turns to 2012 Team GB Olympian, Natasha Jonas. She'll stand opposite Harper in the first all-British female world title fight on Friday, August 7th in the second show of Matchroom's Fight Camp series in Brentwood, Essex. Jonas, thirteen years senior to Harper, was an elite amateur but is now in the twilight of her professional career. In numerous interviews the Liverpudlian challenger states that Harper does nothing better than Jonas. That's something the unified super-featherweight titleholder believes is ridiculous considering a comparison of their recent common opponent.

"Clearly I do do something better than her hence the win over Obenauf (Jonas suffered a shocking stoppage loss to Obenauf)," she said. "I'm excited for it. It's an historic fight and it's a good domestic fight with Tasha. She's been a well-known elite amateur, so now I think this is time for me to have another step up in my career and beat Tasha. It'll open many more doors for me after this fight."

Leading into her eleventh pro contest, Harper has been sparring with perennial British contender, Jason Cunningham. It's preparation that Harper believes has been crucial to the development at this stage of her fast-moving career. "Jason were like a godsend to us during lockdown. We started working with him for in-house sparring before the lockdown and obviously the fight (with Jonas) got cancelled. Then I was just training on my own. When things started to relax, Jason were happy to come straight back into gym with us and carry on where we left off. I definitely believe Jason's took me to the next level. He's a two-weight Commonwealth champion and he's been in the ring with some great fighters, so I've learnt a lot from him from all the rounds we've done. I'm very grateful to Jason. We've got a few weeks left of sparring."

When Mikaela Mayer forces a mandatory for the WBC Women's Superfeather-weight title, Terri Harper is going to be opening the doors at her old job at the Fish & Chips shop, in Doncaster. You been ducking Mikaela, Harper! and I…