In a bruising performance, WBO welterweight champion Terence Crawford landed 50% of his power punches on Amir Khan, before the fight was waved off in the sixth round, following a low blow which Khan claimed afterwards had left him unable to continue any further. 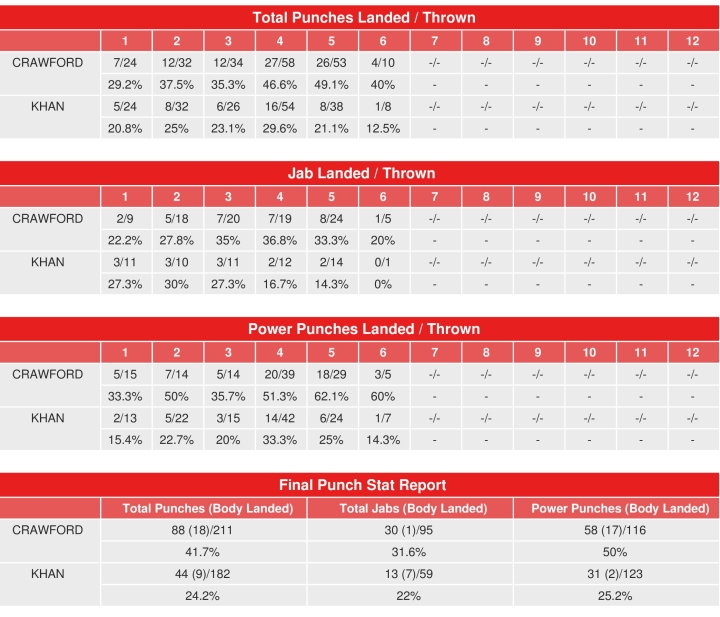 Terence Crawford knocked Amir Khan down just a few punches into their fight. The punch that finally ended it was below the belt.

Crawford retained his welterweight title by technical knockout Saturday night when Khan wasn't able to continue after being hit with a low blow in the sixth round.

Crawford threw a left hand that hit Khan on his right hip and Khan retreated toward his corner in pain. After taking a couple minutes trying to shake off the pain, his corner told the referee that Khan couldn't continue.

It was a strange, unsatisfying ending to Top Rank's first ESPN pay-per-view card, drawing loud boos from the crowd of 14,091 at Madison Square Garden. The finish left Crawford and promoter Bob Arum with plenty of time to lobby for the fight they want next.

Crawford (35-0, 26 KOs) had knocked Khan down in the first round, but the final couple rounds had been competitive, with both fighters throwing hard shots from close range.

Referee David Fields didn't appear to see the final one that hit Khan (33-5) low. Khan could have taken five minutes trying to recover, but his trainer, Virgil Hunter, made the decision before then that Khan was finished.

[QUOTE=MDPopescu;19678343]... now: don't get that emotional, doe... in this sport, people get paid to get their faces busted...[/QUOTE] Its not that emotional, the guy is giving a very thorough explanation of what Khans deficiencies were last night. It was clear…

[QUOTE=Bronx23;19677869]Khan looked awful from the opening bell. Footwork was sloppy at best, was pushing his punches with no kinda steam on them while lunging in. Last but not least he seems to have finally lost his hand speed which was…

Khan looked awful from the opening bell. Footwork was sloppy at best, was pushing his punches with no kinda steam on them while lunging in. Last but not least he seems to have finally lost his hand speed which was…