When the former IBF welterweight champion watches the replay, he’ll see that Terence Crawford cracked him with a quick right hook that abruptly altered their tactical fight in the fourth round Saturday night. Crawford's punch knocked Brook into the ropes, which held him up and caused an official knockdown.

The undefeated Crawford hit Brook with three more punches before referee Tony Weeks was able step between them to administer a count to Brook. A vicious Crawford finished off Brook with several more power punches once the action resumed, including a left hand that knocked a wobbled Brook into the ropes again.

That’s when Weeks stepped in again to stop their scheduled 12-rounder at 1:14 of the fourth round of a main event ESPN televised from MGM Grand Conference Center.

Crawford (37-0, 28 KOs), who went off as an 11-1 favorite due to plenty of late money bet on Brook, retained his WBO welterweight title. Brook (39-3, 27 KOs) was competitive prior to that sequence in the fourth round, but ultimately couldn’t handle Crawford’s power.

“He had good distance, you know, and I was trying to find my rhythm and getting my distance together,” Crawford told ESPN’s Bernardo Osuna after stopping Brook. “And, you know, that’s why it was so competitive at first. I couldn’t get my shots off.”

The 33-year-old Crawford made a fourth successful defense of the WBO welterweight title he won from Jeff Horn, whom Crawford stopped in the ninth round of their June 2018 bout at MGM Grand Garden Arena. The three-division champion from Omaha, Nebraska, also won an eighth straight bout by knockout or technical knockout. 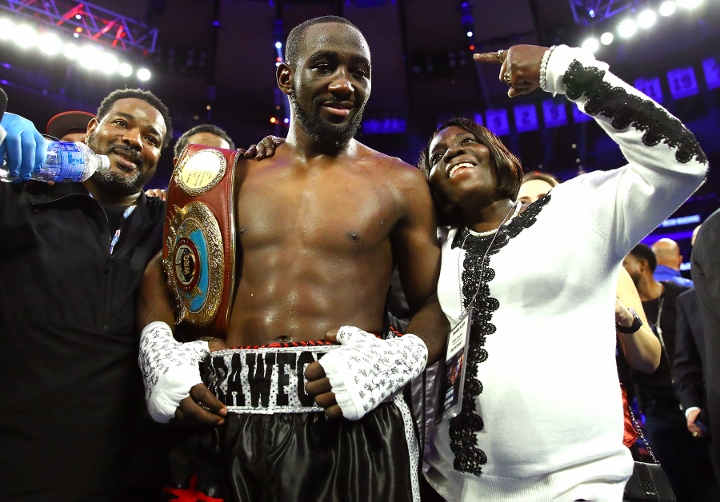 The 34-year-old Brook, of Sheffield, England, lost by knockout for the third time in his 16-year pro career. Gennadiy Golovkin and Errol Spence Jr. previously knocked him out in back-to-back bouts in September 2016 and May 2017.

Brook, who moved up from welterweight to middleweight to challenge Golovkin, suffered fractured orbital bones in his losses to Golovkin (right) and Spence (left). Each of those damaging injuries required surgery in which titanium plates were inserted in Brook’s face.

He went 3-0 in junior middleweight matches between his losses to Crawford and Spence, but against a much lower level of opposition. Brook also fought at the welterweight limit of 147 pounds against Crawford for the first time in the almost 3½ years since his loss to Spence, one of the two opponents Crawford most wants to fight in 2021.

“This is boxing,” Brook told ESPN’s Mark Kriegel. “I obviously got caught with a shot I didn’t see, and the referee waved it off. You know, I’ve never had that happen to me before, but I’ve always said if I’m in a fight, I want to go out on my shield.”

A right hook by Crawford knocked Brook into the ropes with about 2:15 to go in the fourth round. The ropes held up Brook, who couldn’t overcome that punishing punch.

Before their fight changed so suddenly, Brook was competitive for three rounds against arguably the best boxer, pound-for-pound, in the sport.

Brook landed a straight right hand with just over a minute to go in the third round. Crawford connected with a right hand about 30 seconds later, and another toward the end of that third round.

Crawford moved backward in the second round in an attempt to lure Brook forward, so that Crawford could counter him.

Crawford switched to his preferred southpaw stance with about 35 seconds remaining in the second round. Crawford couldn’t land a consequential punch before the round ended, but switching stances neutralized Brook’s jab.

A patient, tactical Brook connected with several jabs in the first round, both to Crawford’s head and body. Crawford couldn’t get inside on Brook during those first three minutes because Brook kept pumping that jab.

“You know, [I] just stepped forward a little more, throw a little more punches, but not too much,” Crawford said. “And I caught him a couple times.”

Crawford didn’t take much, however, from the fact that he took Brook out seven rounds earlier than Spence. Brook took a knee in the 11th round versus Spence and didn’t get up before their scheduled 12-round fight was stopped at Bramall Lane, an outdoor soccer stadium in Sheffield.

“Not at all,” Crawford said. “It was different fights, you know, different, you know, years and whatnot. But Kell is a tremendous talent. I can’t take nothing away from him. He came and he tried, but I took my time. He was in shape, made the weight, so there was no excuses [he brought] to the table. He just came off of three wins, not coming off of a loss, so he had his confidence up. And he lost to a better man tonight.”

[QUOTE=Beercules;20891385]counter Puncher Is exactly what Crawford is. Garcia is stronger, younger and not damaged. One clean hook and Crawford will wobble all over like he did with Gambia.[/QUOTE] Hell no...........

[QUOTE=Richard G;20891233]But he lasted for nine and that gives any boxer who is still steady on his feet a chance.[/QUOTE] He lasted for 9 but he didn't do "well" in the fight by any stretch. He did nothing to give…

[QUOTE=theface07;20891376]Garcia? A guy that mostly sits back and throws occasional counter shots? Bud is most vulnerable early in fights when he's figuring you out. Danny doesn't bring enough early pressure to bother Crawford. He would be figured out and dismantled.[/QUOTE]…

[QUOTE=ralex;20886192]Not very impressed with Crawford Spence will wear him down[/QUOTE] Styles make fights but it took Spence a lot longer to wear down Brook than it did Crawford. Spence has a good work rate, solid skills and power but Bud…

[QUOTE=Beercules;20886155]Looked very mediocre Danny Garcia would mop the floor with Crawford[/QUOTE] Garcia? A guy that mostly sits back and throws occasional counter shots? Bud is most vulnerable early in fights when he's figuring you out. Danny doesn't bring enough early…