Terence Crawford: It Feels So Good To Shut Jose Benavidez Up

Terence ''Bud'' Crawford had one last retort to all the insults Jose Benavidez hurled his way.

His right hand delivered it.

Crawford used an uppercut to Benavidez's chin to knock him down the first time in the 12th and final round and then consecutive rights to put him down a second, prompting referee Celestino Ruiz to stop the fight with 18 seconds left.

''It feels so good to shut somebody up who has been talking for so long,'' Crawford said. ''I'm at ease.'' 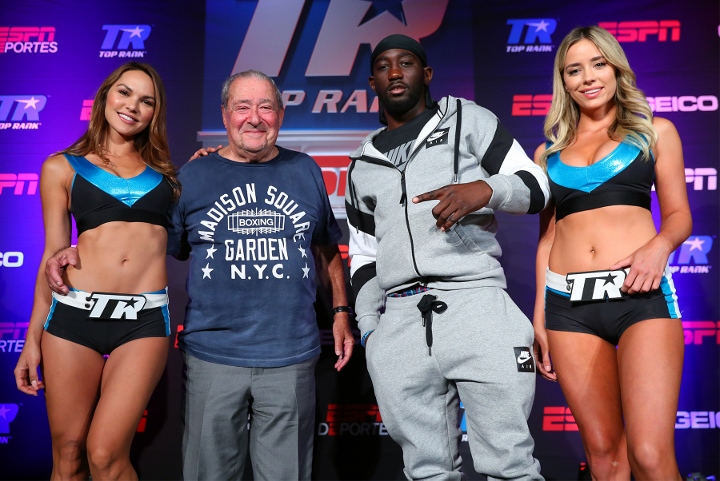 Crawford, a three-division champion who was making his first defense of his WBO welterweight belt, stuck out his tongue at his fallen opponent at the conclusion of what amounted to a personal grudge match.

The 31-year-old Crawford (34-0, 25 knockouts), ranked first or second on the world's top pound-for-pound fighter lists, put on a workmanlike performance for the first half of the fight in front of a hometown crowd of 13,000 that included Crawford friend and billionaire Warren Buffett.

Benavidez, 26, was plenty frisky, motioning for Crawford to keep coming toward him even as it became apparent Crawford had taken control of the fight, and he showed renewed life in the 10th when he landed a couple shots.

''Oh man, it was coming,'' Crawford said of his finishing flurry. ''It was just a matter of time. He slowed down tremendously. He was tired. That's when I saw my opportunity to take my best shot.''

[QUOTE=Body Shot;19197361]So tell me who he should fight at WW. Why should he fight more guys like a one legged washed up fighter? What will that prove? He is number one P4P and youre telling me he needs more tune…

[QUOTE=joesaiditstrue;19194996][U][B][COLOR="Red"][SIZE="7"]Dude has 2 fights at welterweight and there are people here saying he needs to step up.[/SIZE][/COLOR][/B][/U] lol shows how much ppl respect you when they're being this irrational about you needing to prove yourself to them that you're not…

[QUOTE=joesaiditstrue;19194996]Dude has 2 fights at welterweight and there are people here saying he needs to step up. lol shows how much ppl respect you when they're being this irrational about you needing to prove yourself to them that you're not…