Teofimo Lopez: I'll Show Everyone How To Beat Lomachenko!

Rising lightweight star Teofimo Lopez (12-0, 10 KOs) will be looking to do a lot of damage when he faces Edis Tatli on the April 20 undercard of the Terence Crawford-Amir Khan ESPN Pay-Per-View from Madison Square Garden in New York City.

The goal for Lopez is to secure a showdown, by the end of the year, with WBO, WBA world champion Vasiliy Lomachenko.

The two boxers are both promoted by Top Rank, which makes an agreement that much easier to reach. 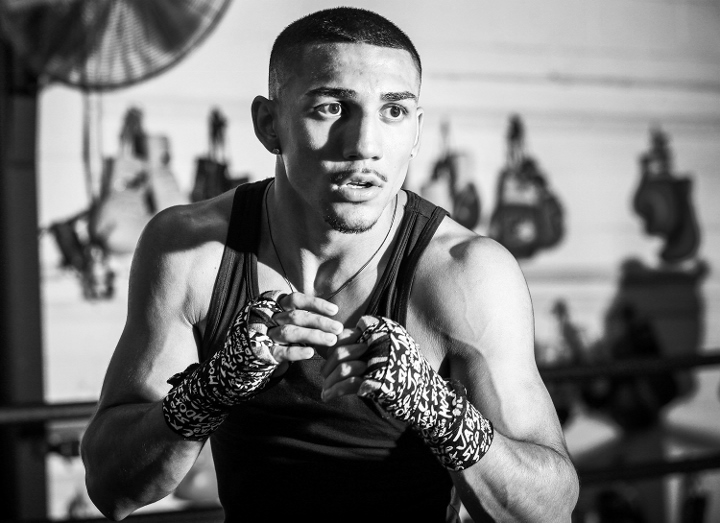 There are some experts who believe Lopez is biting off a lot more than he can chew by pursuing a fight with Lomachenko, who many regarded as the best pound-for-pound fighter in boxing.

“Of course I’m ready, I believe that I am a world champion I just don’t have the belt yet,” Lopez told Boxing News. "Absolutely. I think the thing is that people put too many fighters on a pedestal too high.

“When it comes to beating him, when we fight, I’ll show everyone what it is, how to beat this guy. He’s been beaten before so why can’t I beat him again?”

Provided that everything goes as planned against Tatli, Lopez is planning to go for a world title and then wants Lomachenko before the year is out.

“I’ve got this fight first to show everybody again,” Lopez said. “I believe hopefully after this fight, it could be against Richard Commey [the IBF champion], it could be against Mikey Garcia [who still holds the WBC lightweight belt]. I think they’re going to wait till the end of the year for me and Lomachenko to fight. It’s just having faith and all that I’ve been doing and all that I’ve been through and stuff like that is leading me to this path, leading me to the glory.

Arum is not gonna put this kid (Lopez) in the ring with Lomachenko anytime soon until "The Bobfather" deems that its time to [B]ca$h[/B] in Loma. (And Bobby likes to ride fighters until the wheels fall off)

[QUOTE=Ray*;19648645]That’s how dumb you are. Lol. That’s your only angle, it’s all you post. Zero contribution. “Oh they hating on PBC/American fighter or poster”. Again you have nothing to offer, expect go inside threads looking to at post that doesn’t…

[QUOTE=SugarRaRobinson;19648479]U make some good points, but u gotta let the young gun navigate his own destiny. If he feels he ready he’ll either be right or taught a lesson.[/QUOTE] nobody's preventing him from calling out loma and wanting that fight.…

[QUOTE=SugarRaRobinson;19648385]The division is weak, so much so that Loma is stalking Tank who’s currently a division under him. So Loma would be doing HIMSELF the biggest favor. Otherwise, line up the next 100/1 Can[/QUOTE] Better option than Lopez.

[QUOTE=Ake-Dawg;19648585]You've pointed out no such thing. [/QUOTE] That’s how dumb you are. Lol. That’s your only angle, it’s all you post. Zero contribution. “Oh they hating on PBC/American fighter or poster”. Again you have nothing to offer, expect go inside…