Madison Square Garden, New York City - Teofimo Lopez (13-0, 11 KOs) did what nobody else has come close to doing, knocking out former two-time European champion Edis Tatli (31-3, 10 KOs) with a right hand to the body in the fifth round to defend his NABF lightweight belt.

Lopez, who many view as one of the hottest prospects in the sport, is a contender now and is angling for a world title opportunity.

“I didn’t have the best camp, but I did what I needed to do and came out victorious," Lopez said. "I knew I was going to get him with a body shot. I softened him up and finished him.

"I want a world title shot next. That’s what I want. We promised to take over the show, and once again, I took it over.” 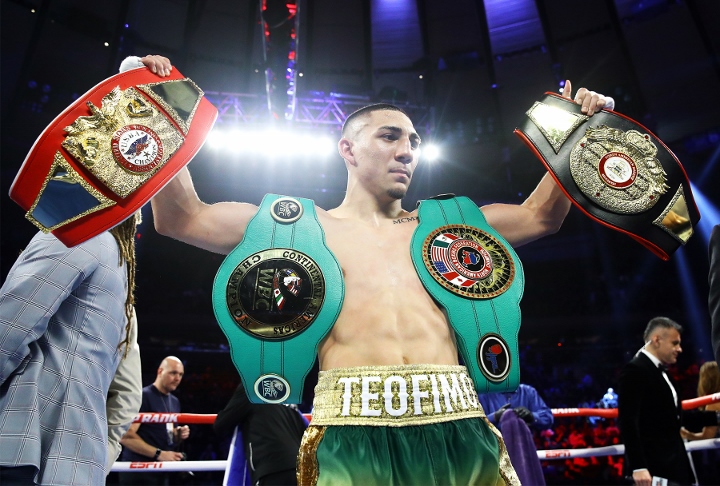 Also on the card, featherweight Shakur Stevenson put forth the best performance of his young career, befuddling and outboxing former world title challenger Christopher “Pitufo” Diaz over 10 one-sided rounds (100-90, 99-91 and 98-92).

Stevenson, a 2016 U.S. Olympic silver medalist, saw his two-fight knockout streak come to an end, but Diaz (24-2, 16 KOs) represented the toughest test of his career.

At no point did Diaz threaten Stevenson (11-0, 6 KOs), whose southpaw movement was too much for the Puerto Rican pressure fighter.

Felix Verdejo (25-1, 16 KOs), the one-time top prospect, moved closer to lightweight contender status with a 10-round unanimous decision over Bryan Vasquez (37-4, 20 KOs) on the opening bout of the pay-per-view telecast.

Verdejo has now won two in a row since a shocking knockout loss last March at the hands of Antonio Lozada Jr.

Verdejo controlled the fight with his jab, as Vasquez attempted to bully the taller man on the inside. But in the end, it was Verdejo who prevailed by scores of 97-93 2X and 98-92.

You can laugh all day but he's legit! Is that fear I smell🤣!

Not sure why Lopez wants this fight so much. Maybe for exposure, maybe to learn, probably for the money. But watching him fight their is no chance he will beat Loma none nutta. He's Just way to green atm and…

Cash out Verdejo to Lopez as an ESPN headliner, make the WBO have the winner become mandatory (since Bob does have the power to do that) and just make the fight. People seem to want it for some reason.....

After the Loma/Crolla fight, in the post fight interviews, Arum said something about Lopez having a title shot in July. Not anything too solid, I think it was like 'If he wins a title in July' etc. I'm surprised there…