Teixeira: After Castano, I Want to Unify All of The Titles In 2021

Patrick Teixeira is not only eager to defend his title against his mandatory challenger as so ordered, but equally as excited as where such a win will take his career.

False rumors had circulated of the WBO junior middleweight titlist entertaining the idea of a trip to Australia for a voluntary defense versus unbeaten second-generation boxer Tim Tszyu. Such claims contradicted with still active plans to face Argentina’s Brian Castano, the WBO-appointed mandatory challenger with whom he has already long ago agreed to terms for such a fight. 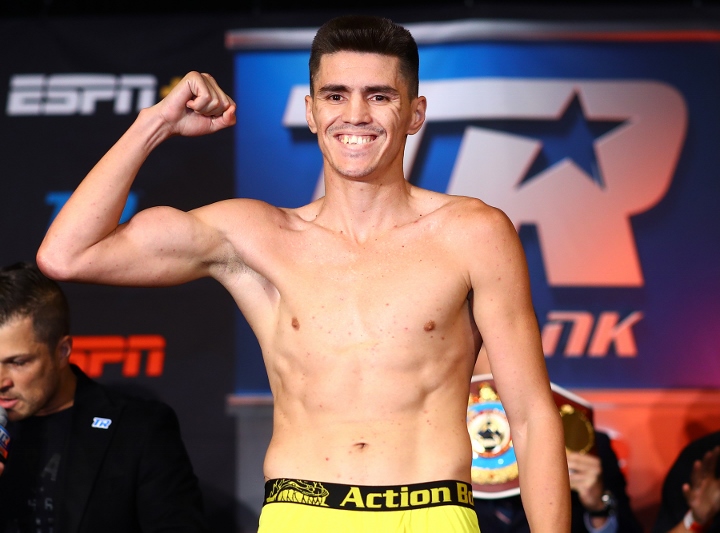 The two were due to collide on April 25, only for the event to get shut down due to the coronavirus pandemic. Restored plans are now in place for a showdown in the 4th quarter of 2020, after which point the reigning titlist hopes to move on to his next career goal—adding more belts to his collection.

“I want anyone at [154-pounds] who has a world title like me,” Teixeira (31-1, 22KOs) told BoxingScene.com. “I know what’s in store for me, but my goal is to become the undisputed champion.”

The modern-day definition of “world champion” greatly varies, particularly when you get into sanctioning bodies with different title levels.

The quickest path to true undisputed championship status for the 29-year from Sao Paulo, Brazil will be to challenge the winner of the September 26 collision between WBA/IBF titlist Jeison Rosario (20-1-1, 14KOs) and two-time WBC title claimant Jermell Charlo (33-1, 17KOs). The winner will gain recognition as the division’s lineal champion, with fighters such as Teixeira and secondary titlist Erislandy Lara (27-3-3, 15KOs) waiting in the wings to dispute such a claim.

Of course, the line awaiting the winner will be a long one, not to mention the dangerous assignment currently within sight for Teixeira. Castano (16-0-1, 12KOs) represents arguably the stiffest test to date for Teixeira, who has won five straight including an upset 12-round nod over previously unbeaten Carlos Adames in their vacant title fight last November.

“Castano is next for me, and it’s a fight I take very serious,” insists Teixeira. “For what I want to achieve in the sport, it all goes out the window if I lose my title to him.

“The dream of becoming undisputed world champion motivates me. After Castano, I want to unify all of the world titles in 2021.”

Castano or Tszyu whoever gets to him first will beat him IMO...then again I thought Adames would beat him and he pulled that off so props to Teixeira

Teixeira-Castaño is a fight that’s must see top of the line action, both guys throw a lot of punches and has stamina for sale to boot! If they have it lined, just let Me know so I can be front…

[QUOTE=Aussiebox2019;20763896]team tszyu are saying they have the fight in australia, teixera will only get robbed of his belt if he comes to this rigged country, dont come here teixeira, dont be stupid, dont be stupid, australia is as bad as…

team tszyu are saying they have the fight in australia, teixera will only get robbed of his belt if he comes to this rigged country, dont come here teixeira, dont be stupid, dont be stupid, australia is as bad as…

I watched Castano's fight with an old Lara. What's so great about Castano?