When Teddy Atlas was in the nation’s living rooms each week as the color commentator for ESPN2’s Friday Night Fights, producers would refer to his segments between fights as being on “Teddy Time,” an idea that the Staten Islander lived with, but didn’t exactly embrace.

“How much time do you need, Ted,” they would ask when the longtime trainer and commentator told them he needed to discuss a particular topic at length.

“Can I get three minutes?”

“Can we negotiate that?”

“They used to call it ‘Teddy Time,’” he said. “If you’re getting two minutes and they’re doing you a favor, it speaks to what we’re talking about. You can never get everything you want in those two minutes out there.”

The topic of discussion on this day is Atlas’ new venture, a podcast entitled THE FIGHT with Teddy Atlas. Launched in January, the podcast has become a hit, with over three-million total views on YouTube and nearly 40,000 subscribers there, and Atlas is almost sheepish when discussing how well the show (co-hosted by Ken Rideout) is doing.

“We’re happy with the success of it, that’s for sure,” said Atlas, who quickly jumps in with, “I hate saying it because it’s like you’re talking good about yourself.”

The numbers don’t lie, even though the newly minted member of the International Boxing Hall of Fame admits that getting into the world of technology wasn’t exactly on the top of the list of someone who still had a flip phone within the last couple years. But when approached by eventual producer Rob Mohr about doing a podcast, Atlas’ daughter Nicole ultimately helped convince him to take the plunge.

“Somebody had to talk me into it,” he laughed. “I’m not into those things. I’m not exactly hooked up as an insider on social media and I’m not that comfortable or familiar with it.” 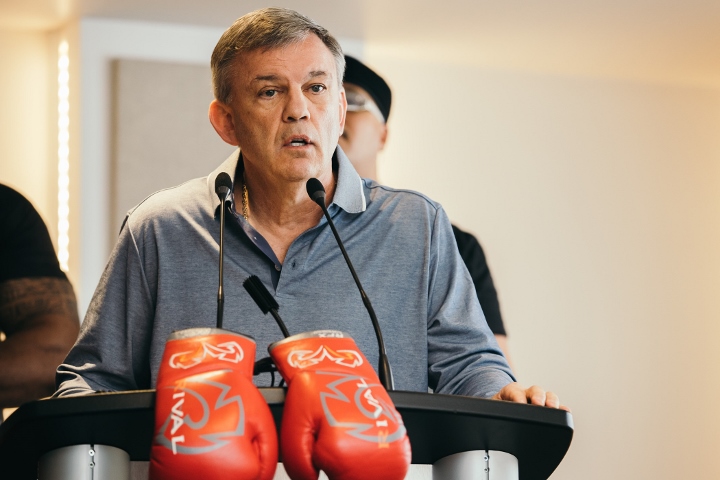 “I thought that was just a thing for the birds,” he said. “I barely understood the concept of it. But I told him (Mohr) I would only tweet my own words. I would never just let somebody say, ‘Okay Teddy, I’ll put this out for you.’ It’s gonna be my words or we’re not gonna do it.”

And while Atlas is confined to 280 characters on Twitter, his podcast can go as long as he wants it to. It brings to mind the days when another member of the Boxing Hall of Fame, Michael Katz, made the move from the New York Daily News to House of Boxing.com. No longer restricted to word limits in the newspaper biz, Katz was now free to write as long as he wanted about whatever he wanted as many times as he wanted to do it.

Is this the new world Atlas is embracing?

“It’s definitely not inaccurate,” he said. “Time is not an enemy and you’re not fighting it anymore.”

He pauses, then laughs.

“You also don’t have to worry about being suspended or reprimanded when you get off the air. But ESPN did give me the freedom more than anyone else. We built an audience and we kept an audience.”

For over two decades, Atlas told it the way he saw it, and whether you agreed with his take on matters, you had to admit that he cared about the sport and the integrity of it.

“I always felt that rather than just collect your check and call the fights as good as you could and hopefully the people learn a little something from it that they didn’t know before and enjoy it, if you could help the sport a little bit in the meantime while you were doing that, that was a good thing. You’re no hero, I get it, but we all make choices and it’s a choice that I had with that platform.

“I think boxing is the greatest sport in the world, but I had that platform because of the weaknesses of the sport,” Atlas continues. “And maybe I could make a difference because there is no centralized governing body like the NFL has, the NBA has, the MLB has and the NHL has and golf and tennis have. I didn’t ask for that job, but if you have the opportunity to make a difference a little bit, do you say no or do you say yes? Let me see if I can and bring some light to these decisions that are sometimes hard to comprehend and hard to justify.”

It garnered Atlas a legion of fans as well as plenty of detractors. But given his history in the sport, you had to respect him. Yet no matter where you stood on the no-nonsense New Yorker, it didn’t concern him as long as he stood true to himself. So while earning a spot in the Hall of Fame would seem to be validation for some, it wasn’t for Atlas.

“It (the Hall of Fame induction) allows me to share something else successfully with my family,” he said. “The only validation I ever felt I needed was the validation from my family, from my children that, ‘You did a decent job, dad, thank you.’ My daughter’s a lawyer, she’s giving us another grandson in October. I have a beautiful grandson now and my son gave us a beautiful grandson. He’s successful, she’s successful, and they’re good people. They care. They care about other people. That’s validation for me. That’s all I need. The Hall of Fame gave me an opportunity to say thank you to my family again.”

And as soon as he left Canastota in June, it was back to work. There’s the Dr. Theodore Atlas Foundation to tend to, an October unification fight with Artur Beterbiev to get his charge - Oleksandr Gvozdyk – ready for, boxing analysis to give on ESPN, and the Oakland Raiders to cheer for, as his son Teddy III is a scout for the NFL squad. Oh yeah, and the podcast, which in true Atlas fashion, is still ruffling feathers.

“(During his run on Friday Night Fights) You had some landmines that you knew were in front of you,” he said. “Now they’re not really there, but you’re still upsetting some people, I’ve been told.”

Yeah, there were probably a few folks who got upset when they saw Atlas break down a 2015 fight from future Tyson Fury opponent Otto Wallin against David Gegeshidze in which Gegeshidze went down for the last time without a punch even landing.

“What am I supposed to do?” said Atlas. “Bob Papa, who was the best partner I ever had, he used to say, ‘You watch a fight, Teddy, and you see things others don’t see.’ I’m showing something that I have the ability to show that should be shown so people can have full awareness. You should have full awareness of what you’re buying, full disclosure. Do you always get it? No, but there are people out there that are supposed to give it to you. I’m the person who tries to do with it. If I can tell somebody something that they didn’t know before that can be useful that can help that awareness, then that’s what I’m doing.”

Yea, and all of us are so phuken perfect.

Sometimes he goes too far but his heart is in the right place.

He may be theatrical in his rhetoric but that doesn’t detract from him being a hof trainer. He was d’amato’s protege before most of the posters on nsb were even conceived. Our opinions as forum members hold no weight to…

[QUOTE=1hourRun;20001676]Teddy Atlas is a buffoon, its astonishing how ignorant Atlas is about the sport that he covers. Please shut-up.[/QUOTE] Common. I don't see TA that way but....I truly doubt it he gonna make as big impact on the Sport as…

[QUOTE=slimPickings;20002245]Like him or hate him, Teddy is GOOD for BOXING!! And that is saying a lot in this crooked sport!!![/QUOTE] Teddy sees dead people