Team Yildirim: We Want Direct Rematch With Dirrell, No Interim

For all of the protests filed over controversial scoring or questionable rulings in the ring, few if any of the final verdicts actually get overturned. Most boxers and their camps know this going in, but often go through the with process in the hope of at least walking away with at least one more title shot.

Turkey’s Avni Yildirim and his team seemed to sense this as they made their way to Mexico City, paying a visit to the World Boxing Council to discuss the outcome of his loss to Anthony Dirrell. Their entertaining vacant super middleweight title fight was halted inside of 10 rounds, after a deep cut over the left eye of Dirrell suffered one round prior was deemed too severe to continue.

Because the 10th round had already begun, the three judges were required to score the truncated action. It was here where Yildirim’s fate was ultimately sealed, landing on the wrong end of a split decision. Judges Tim Cheatham and Mark Fitzgerald—both from the United States—scored the contest 96-94 in favor of Michigan’s Dirrell. The lone dissenting card from Germany’s Juergen Langos had Yildirim winning 98-92. 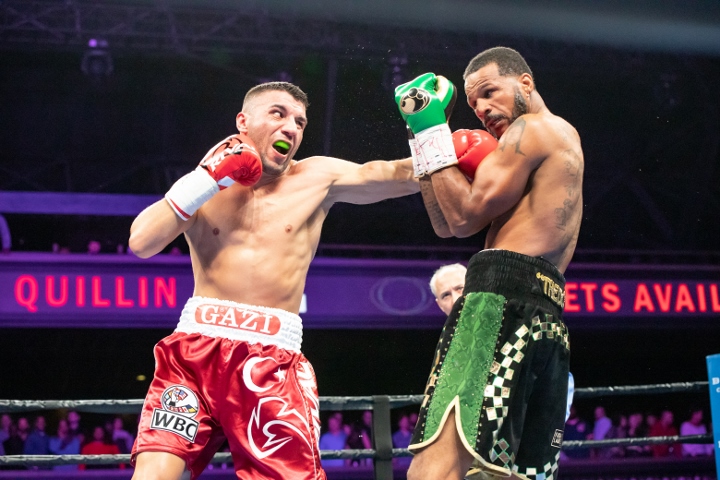 Some boxing experts have theorized that Dirrell’s team knew heading into the 10th they were ahead on two of the three scorecards and were receptive to the first chance of the fight being stopped. Yildirim and his team haven’t quite run with that ball, but have beliefs of their own of how the 27-year old was wronged last weekend in Minneapoilis.

“We are asking for a rematch,” Ahmet Oner, Yildirim’s promoter informed BoxingScene.com. “We believe, first to stop the fight when they did in the middle of the 10th round and then to give the decision to Dirrell were unfair. By round nine, Dirrell was winning the fight by two rounds on the two American judges’ scorecards.

“When the fight was stopped in the 10th round, the round was still scored. If Avni wins that round, the fight is a draw and the title is still vacant because two judges had it a draw and Avni was ahead on the third scorecard.”

The title win for Dirrell put him in an attractive position within his own entity. The 2004 U.S. Olympian and now two-time title challenger, fights under the Premier Boxing Champions (PBC) banner, with such entity presenting last weekend’s FS1 telecast.

Sitting ringside at the broadcast booth for the show was Caleb Plant, who just recently claimed a super middleweight title of his own. His 12-round title lifting effort over Jose Uzcategui last month in Los Angeles also aired live on FS1, fittingly with Dirrell seated at the announcer’s table on the call.

Also in the mix is David Benavidez, who was stripped of the very WBC title at stake last weekend due to having tested positive for cocaine last September.

Yildirim (21-2, 12KOs) would love nothing more than to interrupt at least a portion of any potential plans, by ensuring his own place at the table.

“In my opinion, he deserves the rematch and we are ready to fight sooner rather than later,” Oner insists. “We want a direct rematch, without (an interim) fight.”

The WBC has officially fielded Yildirim’s request and are expected to make a ruling in the coming weeks.

[QUOTE=Fabes88;19549990]Surprised so many people are so willing to look past the fact Dirrell went life and death against THIS guy. After what Chris Eubank jnr did to him lol[/QUOTE] Both Dirrells are pretty long in the tooth and they're not…

Surprised so many people are so willing to look past the fact Dirrell went life and death against THIS guy. After what Chris Eubank jnr did to him lol