Jamel Herring did what he had to do to keep his WBO world title around his waist but his performance was less convincing against Jonathan Oquendo last week in Las Vegas.

Herring (22-2, 10 KOs) started well and managed to build a significant lead on the scorecards in the first four rounds including a knockdown in the third stanza by a left uppercut to the jaw of the challenger. Then, in round five, a wild clash of heads caused two cuts over the champion’s right eye and the blood clearly started to bother Herring who was slowly lose his momentum and thus allowed the shorter Oquendo to push him over the ropes.

The struggle ended after the eighth when the champion told the ring doctor he could not see out of his injured eye. As the stoppage was caused by a headbutt previously labeled as an intentional foul by referee Tony Weeks, the Nevada State Athletic Commission decided to disqualify Oquendo (31-7, 19 KOs). 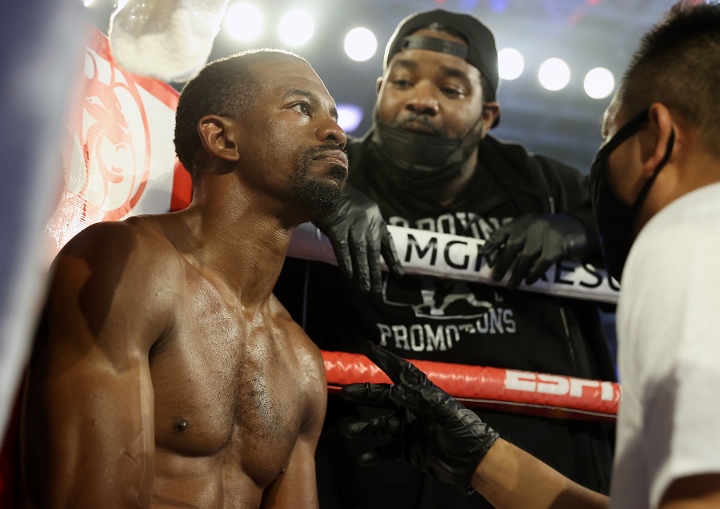 Former multiple-time world champions Timothy Bradley and Andre Ward, who served as commentators during the television coverage of the event on ESPN, were in agreement in criticizing Herring on-air for abandoning the fight.

It was later revealed that Herring had suffered a scratched cornea during the action.

“By his own admission, not a very convincing performance from Herring, rusty to say the least,” said Tobias, who has been vocal to secure a WBO world title fight to his protégé for over two years, to BoxingScene.com.

“Herring was really frustrated and Oquendo took the fight to him. Jamel gave up too easy and he didn’t want to continue. Real champions fight through bloody situations and we saw that time and time again and one did not get the sense that Herring had the courage to do that during this fight. In our view, Herring took the easy way out knowing he was leading on points but losing momentum,” declared the Namibian promoter, before adding.

“With a performance like that Nakathila would make roast meat out of the champion.”

Top Rank planned to stage an in-house matchup between former two-division world champ Carl Frampton (28-2, 16 KOs) and Herring later this year but the recent injury of the latter, that is not only two cuts on his right eyebrow but also a scratched cornea have pushed back that contest to January 2021.