Just when the World Boxing Super Series seemed to once again hit its stride, there comes another bump in the road.

Andrew Wasilewski, Glowacki’s promoter in his native Poland is in the process of filing a formal complaint with WBSS tournament organizers, the World Boxing Organization (WBO) and the Latvian Professional Boxing Federation. 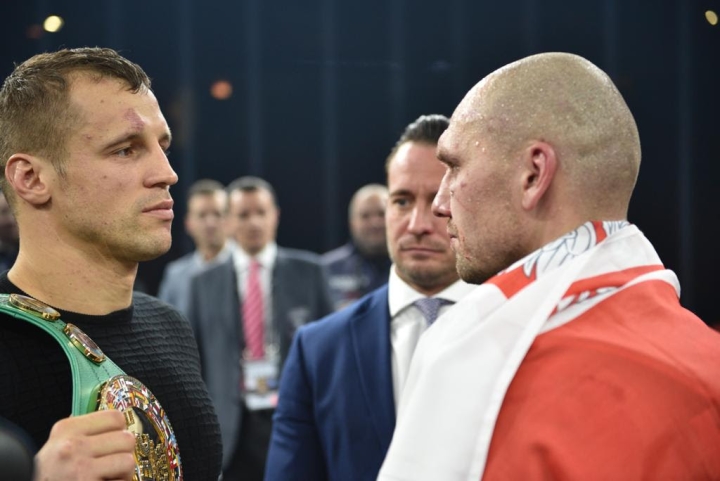 Briedis scored three knockdowns en route to a 3rd round knockout in dethroning Glowacki. However, the bout was laced in controversy.

Both boxers were guilty of blatant fouls in round two—Glowacki landed a left hand to the base of Briedis’ skull, which was met by a vicious elbow across the Pole’s chin in sending him to the canvas.

The sequence nearly went unrecognized by American referee Robert Byrd, once among the sport’s very best but who is clearly past prime and was completely lost in his role as third man on Saturday. His initial reaction to the foul was urging Glowacki (31-2, 19KOs) to get up, before realizing what took place.

Briedis (26-1, 19KOs) was deducted one point for the foul, although intentional fouls are normally subject to a two-point deduction. Further review could actually overturn the verdict altogether and render it a disqualification.

Once action resumed, local hero Briedis took over. He caught Glowacki cold, sending him to the canvas just before the end of round two. The Polish southpaw—who was upgraded from WBO interim to full titlist earlier this month—beat the count and appeared to make it to the bell and out of harm’s way.

That’s if Byrd did his job and recognized the round had ended. Instead, he allowed action to continue for nearly another 10 seconds, long enough for Briedis to pummel Glowacki and once again send him to the canvas. The sequence was ruled a knockdown, to the disbelief of Glowacki’s corner who by this point was standing on the ring apron signaling that the round had ended.

Glowacki was done by that point, with Briedis picking off the carcass in the early seconds of round three. A third and final knockdown was scored, this time with Byrd ending the fight.

The win earned Briedis a second tour as a cruiserweight titlist and a trip to the WBSS finals versus Yunier Dorticos, who scored a clean 10th round knockout of Andrew Tabiti in the evening’s co-main event. However, the Latvian’s status both as a two-time titlist and a tournament finalist are now up in the air as this one goes to the video tape.

All governing bodies involved declined comment to BoxingScene.com as the protest has yet to be formally filed.

Should the final decision remain intact, Brieidis will face Dorticos in the WBSS tournament finals later this year, with the date and location to be determined.

In the event of an overturned verdict, the outcome will ultimately dictate the necessary next steps to take in order to provide clarity.

[QUOTE=asgarth;19837846]Do you have problems with reading comprehension?[/QUOTE] No. Do you have a problem answering a yes or no question you fake ass fool. What you know about the WBSS or boxing. Saying people should get behind this corrupt fight then…

[QUOTE=famicommander;19837833]Every fighter who gets knocked out or takes a cut is automatically given a short term medical suspension.[/QUOTE] Got you, 30 day suspension for a KO. Safety first

This referee any way related to the referee who judged kova vs ward 2 fight any chance? Same clueless look, like foul sh[B]i[/B]t aint happening in front of his eyes... Crooks...

[QUOTE=Blackclouds;19837415]In divisions nobody cares about. Cruiserweight is like the D-League basketball or minor league baseball compared to Heavyweight. It's not one of the original boxing weight classes. I'm also surprised the WBSS didn't go broke from the lack of attention.…

[QUOTE=P4P Forever;19837436]SO you support corruption of this sport? Then your more then corrupt, people like you are a big part of the problem.[/QUOTE] Do you have problems with reading comprehension?