Team Benavidez: Yildirim Will Be Next, Hearn Can Get in Line

Sampson Lewkowicz, the exclusive promoter for WBC super middleweight champion David Benavidez (22-0, 19 KOs), has advised BoxingScene.com that his boxer will honor the recent mandate from the World Boxing Council - which directs his boxer to make a mandatory defense against Avni Yildirim.

Last Saturday night at Staples Center in Los Angeles, Benavidez reclaimed his world title with a ninth round stoppage of Anthony Dirrell.

Yildirim (21-2, 12 KOs), who was ringside this past weekend, lost a very close ten round technical decision to Dirrell in February. Yildirim and his handlers disagreed with the scoring of the bout - and filed a petition with the WBC.

The WBC would ultimately issue a ruling, which ordered the winner of Benavidez-Dirrell to fight Yildirim.

"Benavidez will honor the mandate from the WBC, and he will fight against Yildirim in early 2020, and then Benavidez has another commitment lined up - which we've agreed to," Lewkowicz informed BoxingScene.com. 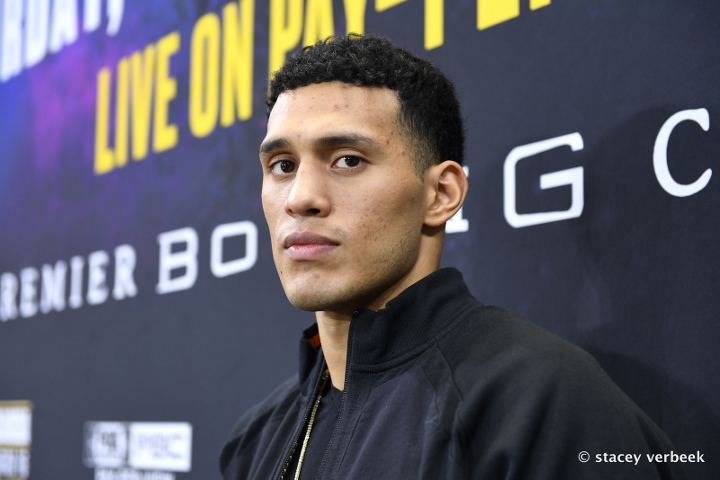 Eddie Hearn, promoter for WBA super middleweight champion Callum Smith, recently sent a letter to the WBC, with a request to order a mandatory fight with Benavidez.

While Smith is the world champion of a rival organization, he also holds the WBC's Diamond title - which gives him some leverage to secure a direct title shot with organization's current champion.

Lewkowicz is not concerned with Hearn's letter. He says a unification bout will happen when Benavidez's other commitments are concluded.

"Benavidez will make his mandatory defense in early 2020. He will then have a year before another is due. After Yildirim, we already have another commitment, and then we will look at unifications. Hearn can get in line. If he wants, he can make his request at the WBC's convention in Cancun [October 20-26] - but he better show up on time, because the last time he came to a convention he showed up late," Lewkowicz said.

David Benavidez is 22 effen years old-be hard on PBC but not this kid and his team. He has all the talent in the world to beat any 168er...like Virgil Hunter said of a young Andre Ward u just want…

[QUOTE=downsouthridah;20098423]Benavidez is going to fight Plant after Yildirim.[/QUOTE] That could be the fight Benavidez is looking for. They have been going at each other with nasty slurs in social media.

[QUOTE=SchoolTheseCats;20099539]He can only fight mandatory if he drops the wba belt which is my point, he already has that fight lined up for November and wbc already called Benavidez/Yildirim which is canceled now that he tested positive for two ped’s....…

[QUOTE=SchoolTheseCats;20098440]they made the ruling of whoever won fight between Dirrell/Benavidez had to fight Yildirim next 2weeks after the Yildirim/Dirrell fight took place after Yildirim filed a protest... Eddie asking wbc to mandate smith/Benavidez is just a smoke screen because he…

So not only are you fighting Yildrim next, you've got ANOTHER fight lined up afterwards? F3ck off, this is turning into another Deontay Wilder situation already. The fight is there on the table for all the marbles. Now take it…