Team Andrade: We're Willing To Do a Canelo Deal Immediately

Upon leaving the arena after his 12-round win over Daniel Jacobs in their World middleweight championship clash this past May, Saul ‘Canelo’ Alvarez passed by promoter Eddie Hearn and playfully asked, “Who do you have next for me?”

Hearn’s response then was the same as it was when he spoke with Golden Boy Promotions on Wednesday: unbeaten middleweight titlist Demetrius ‘Boo Boo’ Andrade.”

A matchup that has never advanced beyond mere suggestion is now officially in discussion, BoxingScene.com has learned on Wednesday. Andrade (28-0, 17KOs) is one of several names under consideration to land a crack at Alvarez, the World (lineal) middleweight king who is seeking out the best possible option for a planned September 14 ring return in either Las Vegas or Texas. 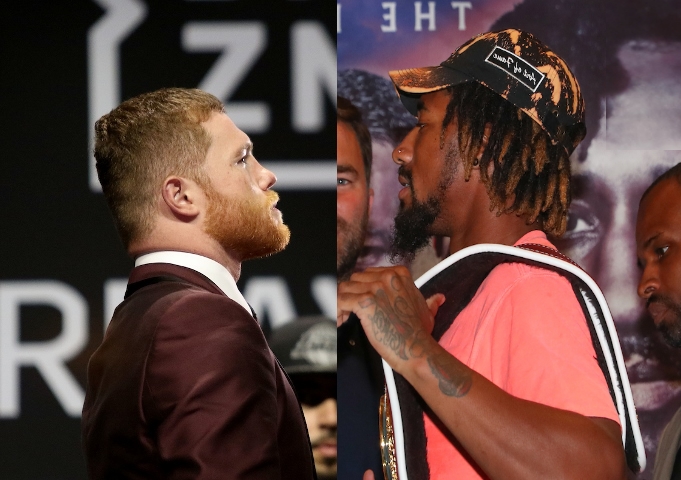 All I can tell you is that Demetrius is excited to finally be in consideration,” Ed Farris, Andrade’s manager told BoxingScene.com on Wednesday. “He absolutely wants this fight on Sept 14th and is willing to do a deal immediately!

“This is the opportunity of a lifetime and Demetrius is ready to go!”

ESPN.com senior writer Dan Rafael was the first to report the two-way dialogue between Andrade and Alvarez through their respective promoters.

Andrade didn’t waste any time in calling out Alvarez following his most recent title defense, a 12-round shutout of Poland’s Maciej Sulecki this past Saturday in Providence, Rhode Island. The DAZN-streamed event served as Andrade’s first true homecoming, with a rabid crowd of 7,136 on hand to commemorate the event.

Shortly after registering the second defense of the title he claimed last October, the three-time titlist in two weight divisions called for the head of Alvarez in his next bout. The turnaround would be his quickest since entering the title stage, and with such a bout marking the southpaw’s fourth ring appearance in just under 11 months.

The 2008 U.S. Olympian doesn’t boast the most appealing in-ring style, or so goes the excuse often used by his divisional peers. Saturday’s bout began a lot stronger than it ended, but still resulted in Andrade remaining with a title around his waist. It’s an important bargaining chip, as Alvarez (52-1-2, 35KOs) has claimed for months that his 2019 campaign would be about collecting all of the middleweight belts.

Already the lineal champ, the Mexican icon added another 160-pound chip in his aforementioned win over Jacobs this past May. The bout was his second under DAZN, with whom he signed a lucrative, long-term deal last fall. Both bouts on the streaming platform have come versus Hearn-promoted opponents, with Alvarez scoring a 3rd round knockout of England’s Rocky Fielding last December to claim a secondary super middleweight title.

It was believed that he would eventually move towards a third showdown with former middleweight titlist Gennadiy Golovkin, whom Alvarez drew with and defeated in their previous two affairs. Golovkin signed with DAZN earlier this year and made his debut this past June, knocking out unbeaten but unheralded Steve Rolls in four rounds.

However, the 2004 Olympic Silver medalist from Kazakhstan and former middleweight ruler remains frosty on the idea of a third fight once again taking place in Las Vegas, where he managed to win on just one of six combined scorecards in their two fight set. In response, Alvarez has begun the search for any September foe other than Golovkin.

“Hopefully Canelo backs up his words and agrees to unify the division once and for all,” points out Farris, using Alvarez’s own words against him. “Canelo has taken a lot of challenges to get here and now he can fight Demetrius on September 14th and put everything on the line.

“One of them will become the recognized undisputed Middleweight Champion of the World. This is what everyone wants to see and this is what Canelo said he wanted more than anything! September 14th is his chance to prove it.”

Andrade has refused to discuss options other than Alvarez or Golovkin as a desired opponent for his next fight.

[QUOTE=aboutfkntime;19880461]or, Canelo could simply fight Andrade then Charlo..... /story unifications > mandatories WBC WBA WBO IBF, lineal, The Ring, Franchise Champion... all the marbles then Smith for the WBA/Ring..... then Kovalev for the WBO[/QUOTE] Very unlikely. Otherwise, Canelo would have…

Problem is Canelo won’t make deal with you Andrade buddy . The money/risk ain’t there yet for Canelo

[QUOTE=Xicano;19881040]This is the best fight that can be made at MW right now. It would unify the division which is a big deal and rarely happens in boxing. For all you guys saying GGG needs to be the next fight,…

This is the best fight that can be made at MW right now. It would unify the division which is a big deal and rarely happens in boxing. For all you guys saying GGG needs to be the next fight,…