Amanda Serrano crossed swords with Eddie Hearn on Twitter on Sunday night, although it is still not clear whether or not the multi-weight world champion will be in the opposite corner to Katie Taylor on August 22 is still far from clear.

The fight, seen by some as the biggest female contest of all time, was originally to have gone ahead in May in Manchester, before being delayed by the coronavirus pandemic to July and Hearn now wants to stage it on his final Fight Camp card behind closed doors in the garden of the Matchroom offices in Essex on August 22. 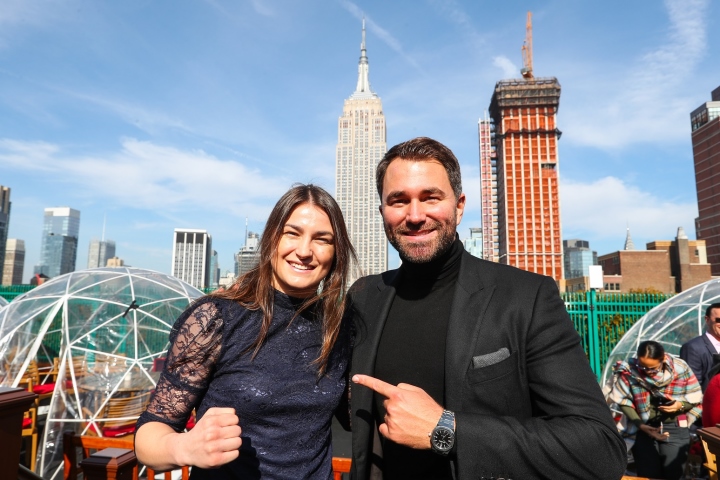 Serrano’s manager, Jordan Maldonado, claimed the fight was off because she had been told to take a pay cut, something Hearn denied, saying no offer of a reduced purse had been made. Hearn also told boxingscene.com that he had a binding contract for the fight.

Serrano came out fighting on social media, though, accusing Hearn of treating her like a toy.

“Yes I signed four contracts to fight Katie Taylor and despite what lies Eddie Hearn wants to say, he offers us a purse deduction and change of location in addition to yet another date,” Serrano said on Twitter. “My team will handle this. I’m not a toy, I’m done with games.”

Serrano claimed she had been told she would not get her full purse if there was not a crowd at the fight and she was not told of new dates, finding out when she read it online.

Hearn responded to Serrano by saying he had the right to reschedule the fight by the terms of the contract. He admitted he had sounded out the Serrano camp about taking a reduced purse – adding that Taylor’ pay was being cut – but said that when he was told Serrano would not take less money, it was confirmed in an email that she would get her full purse.

Lou DiBella then jumped into the fray, arguing that Hearn had offered a reduced purse and accusing the British promoter of lying. “Deal with me, I’m Amanda’s promoter,” he wrote. “Don’t antagonize her. Who are you, Trump?!”

Taylor also dived into the debate, posting: “We both signed contracts, all financial barriers have been removed and any training/travel issues are the same for both of us as I’m also training in the US. No more excuses, this is a fight to elevate the sport. August 22 is our time to make history. You in?”

As of now, however, the fight seems to be off. Hearn says he has made soundings to Delfine Persoon to be a replacement, although there are likely to be more rumblings before anything is confirmed.

i mean hearn is a sleasebag no doubt but this is just normal stuff, now it looks like taylor is taking a paycut to get the fight done and serrano doesnt have to, this serrano one just seems impossible, if…

[QUOTE=LDBC Slayer;20633411]Let's gets justice for Persoon Taylor is a coward we all know it[/QUOTE] I just hope if there's a rematch, Persoon trains hard to absolutely annihilate the fraud that is Taylor. [QUOTE=edpboxing;20633424]100% True. She was robbed imo[/QUOTE] 100% robbed.…

[QUOTE=Oldskoolg;20633449]Eddie “The American Takeover” Hearn has a horrible reputation, Serrano and her team are automatically more believable[/QUOTE] Eddy said he had a billion dollar budget and tried to buy his way in, but the first thing he tried to buy…

So, the story so far: Hearn puts out feelers - or possibly something in slightly stronger terms - to see whether they'll accept a pay cut. Serrano goes on social media claiming that she was offered a reduced purse that…

[QUOTE=Ray*;20633653]Like i have said before Serrano didn't want this fight, but she has NO choice as she has a binding contract. No one wants a pay cut, so you have to wait it out, but you cannot then complain about…