Back in 2015, it looked as though there was another outlier coming from the Inoue family. Takuma, the younger brother of Naoya, had blazed his way through the first six opponents of his career, and was already fighting in twelve round bouts. By that year, his brother was already a two-division world champion, and signs pointed to Takuma not being far behind. As a result, Ring Magazine named him the 2015 Prospect of the Year.

Fast forward to 2021, and it’s Takuma’s career that has been the outlier, not necessarily him as a talent, albeit due to an abundance of bad fortune.

The younger Inoue returns to the ring on Thursday at the heralded Korakuen Hall in Tokyo, Japan against OPBF bantamweight titleholder Keita Kurihara in a bout to be aired on delay by Fuji TV nationally. It will be Inoue’s first appearance in 434 days.

Inoue was last seen in November of 2019 losing a hard-fought battle with Nordine Oubaali in a bid for the WBC bantamweight title. Though Alejandro Rochin’s bonkers scorecard of 120-107 in favor of the champion suggests otherwise, Inoue seriously troubled and fought tooth-and-nail with an elite belt holder and simply came up short.

It was Inoue’s first world title opportunity, but it’s important to note that it should have come three years earlier. Coming off his crowning as Prospect of the Year, Inoue was scheduled to face then-WBO bantamweight champion Marlon Tapales on December 30 of 2016. It was to be a crowning moment on the same card as his brother’s title bout against Kohei Kono on a major end-of-year card in Japan, where most of the country’s biggest bouts land. Unfortunately, Inoue suffered a hand fracture in training, one that turned out to be much worse than originally expected. At first, the thought was that Inoue’s title shot would merely be postponed until 2017, but then the spring of that year rolled around and he was still unable to use his hand.

When he did return, he did so mostly at the upper reaches of the domestic scene in Japan, rather than on the world level fast track that was thought to be paved for him.

It’s precisely in that position which he finds himself in again on Thursday against Kurihara, an exciting big-punching bantamweight who has yet to graduate beyond the domestic level.

"After the world title fight, I have been carefully training by re-examining what I lack," Inoue told Japanese boxing website Boxing Mobile. “I think my overall level has improved. This is a passing point to (fight for a) world title again.” 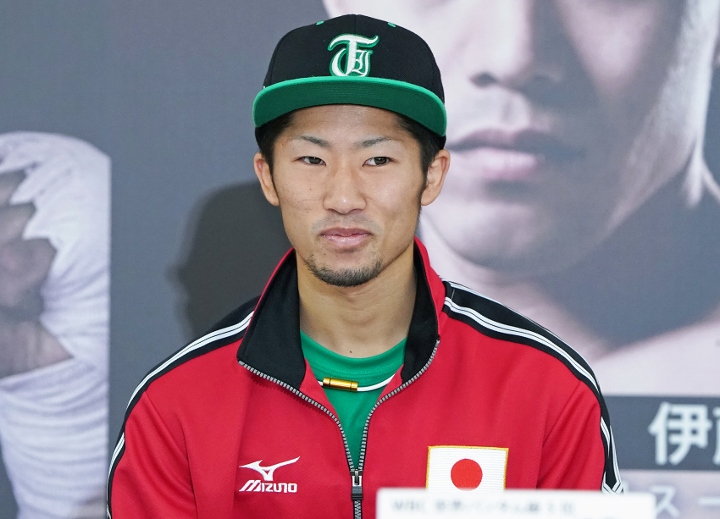 Though he has been out of live action for almost a year and a half, he has been able to enjoy the highest caliber preparation possible under the circumstances. Naturally, he’s spent time training with his brother, and the two engaged in a month-long camp together in Shizuoka, primarily focusing on strength work. Takuma also sparred Kosei Tanaka, whom he hadn’t sparred with since they were in high school, as Tanaka prepared for his New Year’s Eve bout against Kazuto Ioka.

Inoue remains neatly positioned for another crack at a title, sitting at No. 7 in both the WBC and WBO’s rankings, where titles are held by his old nemesis Oubaali and John Riel Casimero respectively.

There is historical precedence to suggest his dream will come true. Ring Magazine issued Prospect of the Year honors from 1983 to 1988, and resumed handing it out from 2011 to present day. In the years the award was issued prior to Inoue winning it, only three fighters who were given that distinction did not go on to win a world title: Kenny Baysmore, Mike Williams and Engels Pedroza. In the years since Inoue was honored, only Erickson Lubin, Vergil Ortiz and Jaron Ennis have not won world titles, with the latter two having not even challenged for one yet.

A loss against Kurihara though, and it would suggest that he could be destined to be one of those outliers.

In speaking with Boxing Mobile, Kurihara broke down Inoue’s strengths and weaknesses with surprising honesty and accuracy.

“His speed is the most impressive. I thought he was fast when I was watching the fight with Oubaali. I think he has the fastest hands in the domestic bantamweight class, and he also has good technique,” he said. “I think Naoya is confident in his punching power, and I think he has the idea of hitting and frightening his opponent, but I don't think Takuma has that.”

Kurihara has a substantial size advantage over Inoue, and it is true that the bulk of his losses came as a novice. However, his 2017 stoppage loss to Hiroaki Teshigawara and subsequent titantic struggle against Yuki Strong Kobayashi the following year suggest that his No. 4 ranking in the IBF is one reflective of attrition rather than potential.

It’s possible that this bout will be similar to his old foe Kobayashi’s recent bout against Daigo Higa on the Tanaka-Ioka undercard—an exciting domestic star serving as a path for a rebounding world-caliber fighter to rehabilitate himself with a crushing knockout win.

According to Inoue, that’s exactly how it will play out.

“I will win without letting my opponent do anything,” said Inoue. “I will beat him no matter how many rounds the fight goes. At the end I will KO him.”

[QUOTE=YoungManRumble;21017957]Hahaha! Yeah I've been there. Wagering on live Russian table tennis at 3 am... They already settled and lost though so must have been a head clash. Oh well I broke even thanks to NHL yesterday.[/QUOTE] BRO! this made me…

[QUOTE=1hourRun;21017002]OK thanks. You might have to wait for a couple days to get the bet settled. This happens to me periodically when I bet on Basketball from Turkey, Romania, Russia etc -- dont ask me why I'm betting on games…

[QUOTE=asgarth;21016983]I confirmed it from a twitter guy who might be wrong lol. But if it's from a punch it should have been ruled a TKO.[/QUOTE] OK thanks. [QUOTE=YoungManRumble;21016994]Hmm well boxrec do make errors and this wasn't televised and my bets…

[QUOTE=1hourRun;21016980]asgarth confirmed it was a punch. I'm going to search for photos, I got to see the gore![/QUOTE] Hmm well boxrec do make errors and this wasn't televised and my bets are still unsettled so I'm still holding on to…

[QUOTE=1hourRun;21016980]asgarth confirmed it was a punch. I'm going to search for photos, I got to see the gore![/QUOTE] I confirmed it from a twitter guy who might be wrong lol. But if it's from a punch it should have been…