Takam: With Joe DeGuardia, We Can Reach My Full Potential

Carlos Takam is ready to resume his career—even if in a direction few expected.

“I am excited about signing Carlos Takam,” Joe DeGuardia, founder and CEO of Star Boxing told BoxingScene.com. “He has tremendous untapped upside, especially with proper preparation. He was always a good athlete and now that he is training in Las Vegas with a quality trainer and getting good sparring he keeps improving.” 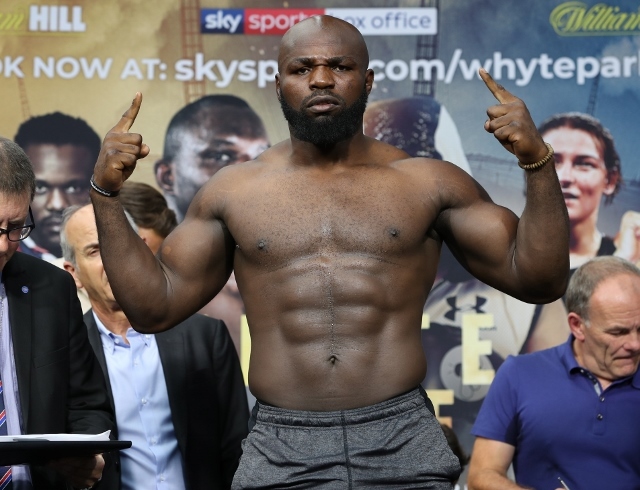 Takam (36-5-1, 28KOs)—a Cameroon-born heavyweight who recently relocated from France to the greater Las Vegas area—has been out of the ring since a knockout win over Senad Gashi last December in England. The bout was his third straight in the United Kingdom, his previously two appearances resulting in stoppage losses to then-unbeaten titlist Anthony Joshua—as a late replacement for an injured Kubrat Pulev—in Oct. 2017 and fellow former title challenger Dereck Chisora last summer.

Takam more than had his say in both losses, as well as to Alexander Povetkin and then-unbeaten contender Joseph Parker, who went on to claim a heavyweight title just months after their hard-fought May 2016 clash in Australia. Among his best wins are a June 2014 landslide decision over Tony Thompson which set up a showdown versus Povetkin.

His reputation as a no-nonsense contender brought plenty of intrigue into a planned May 25th showdown versus Oleksandr Usyk (16-0, 12KOs), the unbeaten World cruiserweight champ who will now campaign as a heavyweight. Their bout was scrapped when Usyk suffered a torn biceps injury, and remains unclear as to whether it will land on a planned Oct. 12 DAZN show in Chicago, Ill.

Wherever he next appears, it will be with a team he felt has his best interests at heart moving forward.

“I have had several offers on the table,” Takam told BoxingScene.com in signing with the Bronx-bred promoter. “With Joe DeGuardia, the way I see it, I have a great feeling that we can reach my full potential together.”

A fight date is expected to be announced soon for Takam’s official debut under the Star Boxing banner. Whether it’s versus Usyk or in a different direction, it will come against a fully-prepared heavyweight as opposed to the gun-for-hire that was thrown into several high profile fights on short notice.

“ I have been speaking with him and his team for months now, but once I spent some time with him I really decided I wanted to sign him,” noted DeGuaradia. “I think highly of him. The hard-core boxing experts know how good he is, but now he will show the casual fans here and will surprise many as to how good he can still be.

“We are planning his next steps and I look forward to a bright future for him.”

[QUOTE=MDPopescu;19986052]... "[B]Whether it’s versus Usyk or in a different direction[/B], it will come against a fully-prepared heavyweight..." :) ... the guy is ducking Usyk, right?...[/QUOTE] Usually when a guy signs with a new team they go in different directions then…

Curious to hear what Takam says in 6 months.

[QUOTE=Boxing Scene;19986041]He's not getting Usyk after this bone headed ass move. I don't get fighters doing stupid **** like this.[/QUOTE] He might be after a Chisora rematch.

prob not going to see him with Usyk now