David Morrell Jr. is a lot of things.

And he’s pretty much anonymous to any fan outside the hardcore set.

But he’s something else, too.

Precociously confident in his abilities.

“The truth is,” Morrell said, “I did not think that it would last all the rounds.

“But I see once more that this division is mine.”

Just a few weeks past his 23rd birthday and a veteran of just four pro fights, Morrell was referring to the 168-pound weight class in the aftermath of Caleb Plant’s IBF title defense Saturday night in Los Angeles.

He chatted with BoxingScene.com before, during and after the Fox TV broadcast.

The Cuban-born Morrell was a youth world champion and a Cuban national champion as a teen, then turned pro in 2019 and ended the year with quick-stop wins in bouts scheduled for six and eight rounds.

He was quickly elevated to the 12-round realm in his next bout last August and walked away with the WBA’s interim bauble at super middle with a one-sided decision over 22-0-1 foe Lennox Allen.

Morrell weighed 170 for what wound up as a third-round stoppage of Mike Gavronski in fight No. 4 in December, but was still gifted by the sanctioning body in January when it elevated him to the dubious “regular” super middleweight title slot behind reigning “super” champion Canelo Alvarez.

And while the Panama-based group reeks of ignominy, its stench doesn’t obscure another fact.

Morrell can fight. And for a guy just 18 rounds into his career, his ascension is noteworthy.

“The first time I laid eyes on David Morrell Jr.,” said Luis DeCubas, “I saw a bigger and better Vasilliy Lomachenko with power in both hands.”

Let’s not forget, DeCubas is a card-carrying homer.

He’s the chief operating officer of the company with which Morrell works – Warriors Boxing Promotions – and would like nothing better than for his charge to even approach, let alone reach, the levels of success Lomachenko attained while his career record was still in single digits. 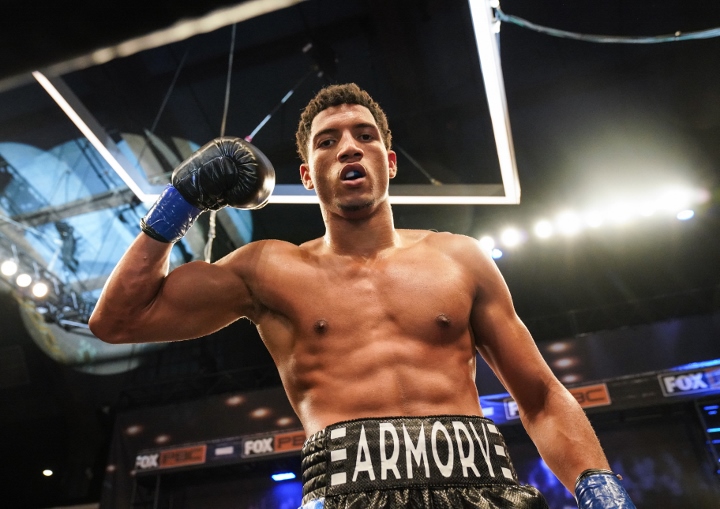 A two-time Olympic champion, Lomachenko won by KO in his pro debut at age 25, lost a split decision for a 126-pound title belt in his second fight and captured a different championship strap in his third.

Each of his 13 bouts since have had one or more titles on the line – across three weight divisions – and he’d won 12 straight before an upset loss to fellow champ Teofimo Lopez at lightweight in October.

For 16 career fights, he’s made something in the neighborhood of $20 million.

Meanwhile, Morrell is still slotted only 34th by the Independent World Boxing Rankings and has only one win (Allen, 48th) in the top 50, but the boost to “regular” champion brought with it a WBA mandate to strike a deal for a fight with its No. 6 contender, John Ryder, by the middle of February.

Ryder was beaten on points by Callum Smith in November 2019, has fought once since then and is ranked seventh on the same IWBR list that has Morrell penciled in 27 spots lower. So beating him, while not an instant pass to pound-for-pound lists, would be quite an accomplishment for a five-fight pro.

Even one who thinks very highly of his abilities.

“I still have many things to conquer in the division,” he said.

“The truth is that I am the best, but not legally because I do not have all the titles. At the moment I am among the four (champions), from there to (No.) 1 there is little left.”

The aforementioned Plant holds the IBF title at 168, while Alvarez has the WBA and WBC titles and Englishman Billy Joe Saunders is the WBO’s champion. The IWBR has Alvarez first, Plant fifth and Saunders sixth, while Ring Magazine lists Alvarez as its top man with Plant at No. 3 and Saunders at 6.

Ryder, incidentally, is eighth and Morrell is unranked.

“My family and the people who trust me make me better,” Morrell said, “apart from the desire I have to be (the best) because of where I come from.”

Morrell defected from Cuba three years ago and made the trip to the United States by boat after saying goodbye to members of his immediate family who stayed behind.

He now fights out of Minneapolis and is trained by the father-son tandem of Sankara and Adonis Frazier, who also work with ninth-ranked welterweight Jamal James. Morrell’s aim remains to make enough money so he can legally reunite his family in the U.S.

“I want to have all the possible fights,” he said, “obtain victory in all of them and God allow me to bring my mother to this country this year.”

Step No. 1 will come with Ryder, a 5-foot-9 lefty, assuming he accepts the chance to fight for the second-tier belt.

“If he gives an answer and if he says yes, we’ll (fight) in May,” Morrell said. “I have seen two fights of him and I have seen how he fights and some things of his style.

“Not falling into his fighting style (is among my goals, and) attacking is one of the things that I like to do. But as I say always, the fight is never what you expect.”